Ahli Parlimen Padang Rengas Mohamed Nazri Aziz umum tarik sokongan daripada Kerajaan Perikatan Nasional pimpinan PM Muhyiddin Yassin. Hari ini bermakna Kerajaan ada 109 sahaja, tak ada majoriti. He claimed PM Muhyiddin Yassin admitted defeat when he went to see the Yang di-Pertuan Agong, seeking an emergency declaration. "To me, this emergency declaration is an admission of defeat by Muhyiddin because he has lost the majority, which means he would need to call for an election. "Since we can't hold GE15 yet due to Covid-19, Muhyiddin asked for an emergency because he has lost (this battle) and no longer holds the majority" 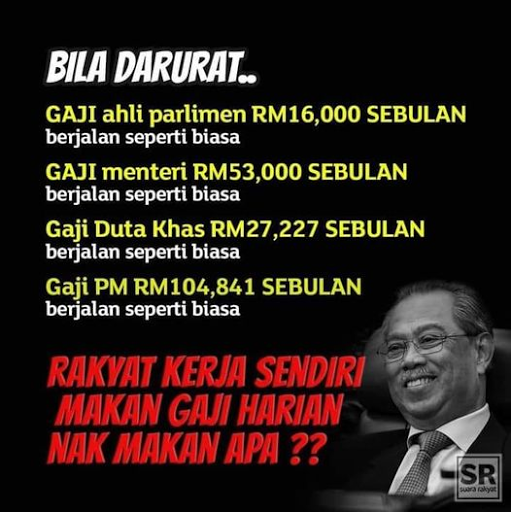 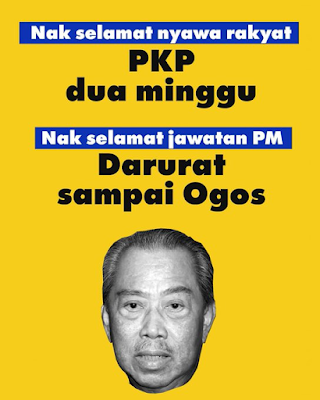 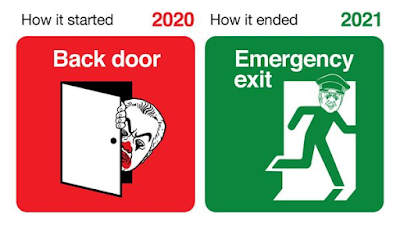 Oops ! Hisham Tak Jadi DPM,
Declaration of Emergency...
Well there is a lot to be said. First of all we are already in a State of Emergency. (The Proclamation of Emergency or Darurat came into effect yesterday 11 January 2021.)  Hishamuddin Hussein Onn is not going to be the DPM (yet). The PM's office has denied the news. But H2O did not say anything. Or I missed it.
Then just today Nazri Aziz has pulled his support for Tan Sri Muhyiddin Yassin. That makes the government a minority government. The PM now has 110 MPs on his side. But with 110 MPs the PM still has the confidence of the single largest bloc of MPs in Parliament. Brader Backdoor has less than 91 MPs supporting him. Maybe less now.
However the suspension of Parliament under the Emergency will see the PM remain intact for the next six months. Considering that Nazri Aziz pulled his support just hours AFTER the declaration of Emergency it makes you wonder  what would have been the case if Nazri had pulled his support yesterday or the day before?
Just three days ago Nazri Aziz was quoted as saying that he would prefer that Muhyiddin Yassin be welcomed back to Umno,  that Muhyiddin be made the president of Umno and continue as the PM.  Yet today Nazri has pulled his support for the PM. So is there a method to Nazri's madness? Is there something more behind these manoueverings?
Some people do not support Muhyiddin Yassin as PM because of his cooperation with UMNO.  That may include you, Mr Reader. Yet the same people (including you Mr Reader) are ok if Chief Locksmith of the Brotherhood of the Backdoor secured a Letter of Support from Najib and Zahid (one a convicted criminal handed down 12 years imprisonment - now on appeal and the other facing 87 criminal charges in Court) to cooperate with the same Umno and form the government. 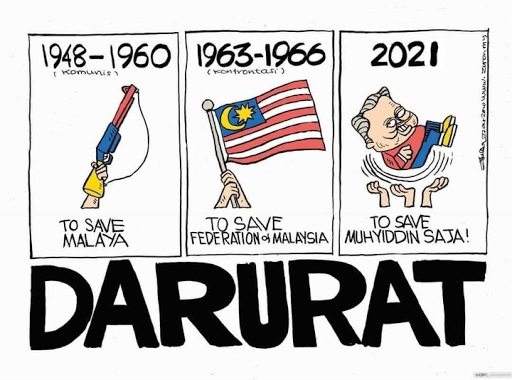 The PM has stated plainly that the purpose of the Emergency was also to postpone / not to have any elections for the next six months. The PM has stated his reason - considering what happened to the pandemic after the Sabah elections, no one wants any more elections now. I think no one in their right mind wants to have any more elections until the Corona Virus pandemic goes down substantially.
Yet with two UMNO MPs (Machang and Nazri) pulling out their support it is obvious that the PM does not have a clear majority in Parliament. On a normal day this would or should trigger a general election. But the Emergency puts a stop to any elections. Hence it also keeps the PM in power for SIX more months.
So here is the question that will be debated and re-debated : Was the PM being self centered (saving himself) when he advised the Agong to declare Emergency or does he have the interests of the  nation at heart (to avoid the virus spreading even more in a general election?) Or could it be both?
Whatever answer you choose, no one in their right mind wants a general election now.  If there is a general election now the virus will certainly spread. Some foolish people are suggesting 'Lets change the PM WITHOUT having a General Election'.  Caretaker PM lah, interim PM lah.
The Agong must appoint whoever has majority support in Parliament. 110 MPs is more than 85 or 90 MPs. So how? Back to square one.If Muhyiddin remains as PM you demand a General Election.If Muhyiddin is replaced (by Backdoor) you dont want a General Election. You cannot have your cake and eat it too. Or you cannot eat your cake and still have it too.
Here is one more point to note. Here is the schedule of some of the song and dance appearances in the Courts over the next few months... 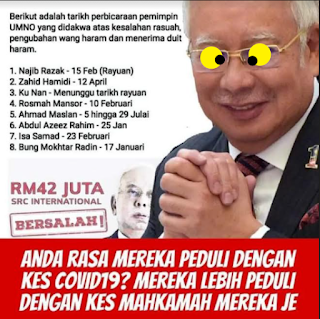 Super Moron's appeal is on February 15th, 2021. He has tried to have it postponed but I believe the Court has said No!!!.  Bung Mokhtar and Azeeeez go first in January. Rosmah, Najib and Isa Samad follow in February.
If they are found guilty there is no reason for them to continue to support Muhyuddin for PM. Two of them already signed the letter of support for Brader Pintu Belakang. Surely the PM's people also know this even better. Meaning Tan Sri Muhyiddin is going into this with his eyes wide open. At the end of the day there MUST and WILL BE a general election.
"Pada masa itu, terpulanglah kepada rakyat untuk memilih kerajaan mana yang layak untuk mentadbir negara ini dan menjaga kebajikan saudara dan saudari sekalian"
This is an interesting statement. They have already pondered (and possibly worked out) a post Najib, post Zahid, post Bung, post Azeeeeez etc scenario. With the Emergency measures there cannot be any Umno General Assembly on the 31st January 2021 either. But I believe they can still do an "online" assembly. They can still pull out their support for the PM.   But with the Emergency the issue has become academic.
For the next SIX months at least the Government will be left alone to focus on solving the country's problems. The Prime Minister has got himself SIX months to prove himself.  There must be results in those SIX months. The vaccines must be fully administered to all those who are in the target groups.
The economy is very, very easy to fix but there is no political will to do the right things. Racial thinking, political interests, left over cronies, elite groups, rich peoples groups have a solid grip on economic policy in this country.The misery will therefore be prolonged.
Lets say after SIX MONTHS there will be a General Election. So how will it be won? By that time lower virus numbers will be a given in many parts of the world. The same should happen in Malaysia. That is what people would expect to happen - all over the world.  Meaning if there is success in beating the virus, it may not be a huge selling point for any General Elections.
But if the economy gets worse or does not improve in the next SIX MONTHS, that will have a bigger effect at the polls.  It is always the economy. Pay close attention to the economy. The economy will not recover without major changes to the 50 year old unworkable and failed policies. The failed Dasar Ekonomi Baru policies.  Get rid of them. - Syed Akbar Ali 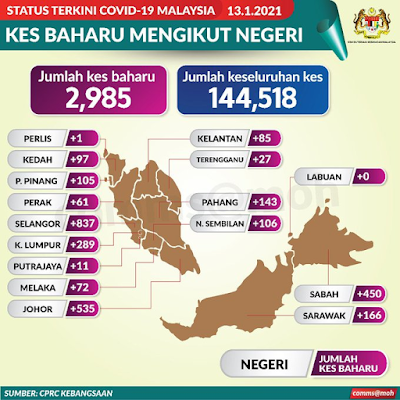 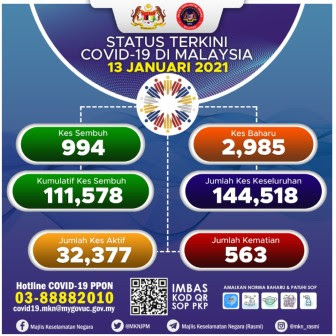