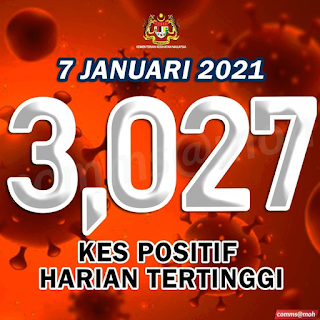 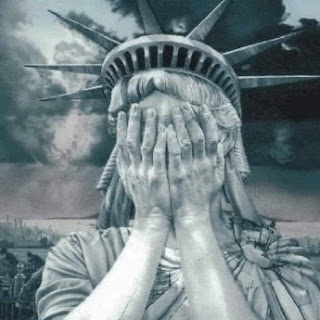 Ugly US democrazy...
This morning, we the lovers of democracy woke with a heavy heart to the news that came from Washington. The protest turned insurrection that occurred at the US Capitol Building earlier today is a nightmare brought to life for those of us dedicated to a peaceful world where our systems of governance allow for the people to exercise their freedoms and build a better world together.
We take stock in the fact that these were not peaceful protesters simply exercising their constitutional right to assemble, but more an angry mob, armed and using such rhetoric as “no one gets out alive, not today.” We also recognise these protesters, as a break from the convention of peaceful demonstration practiced elsewhere in the US and around the world.
We must not let the actions of the few reflect or diminished the cause of the greater many. Democracy shines brightest when the people are free to stand in opposition, but this abuse of duty and sullying of democratic ideals threatens us all.
Insurrectionists stormed Congress in protest of
President-elect Joe Biden’s victory....
Prior to the mob’s storming of the Capitol, President Donald Trump made a speech as part of the “Save America” Rally at the White House filled with insightful language and war-like rhetoric, many of those in attendance of his speech this morning went on to take part in the storming of the US Capitol which resulted in the interruption of Congress’s certification of the 2020 election results, which have resulted in the election of President-Elect Joe Biden.
The result of the mob’s march was an evacuation of the building, the theft of property, and an armed standoff that resulted in the death of one woman.The situation in the US today stands as a prime example of our deeply polarised world, quickly driven to action through hate, feed by fake news, misinformation, and manipulative rhetoric of a xenophobic nature, and a more difficult hurdle that all of us who believe in democracy must face and transcend if we are to make for a better future.
If black/coloured people ambushed Capitol Hill USA, hundreds may have been shot dead. If  Muslims ambushed Capitol Hill USA, Iran, Iraq,Palestine and Afghanistan will be bombed today. Luckily, those involved in the ambushed Capitol Hill were majority stupid white Americans...
In our New Year’s reflection, we must continually ask ourselves how we can make this year better than the last, asking in our critical reflection how we can improve ourselves and make the world better for our neighbours.
I applaud the US Congress for continuing their most important work once the building was secured. We must denounce those who insight violence with their words and any government who would manipulate their people in such a way as to create divisions and vehement anger. I echo the sentiments that former US President Barack Obama presented in the form of a challenge to America and, dare I say, the rest of us, “They can continue down this road and keep stoking the raging fires. Or they can choose reality and take the first steps toward extinguishing the flames.” 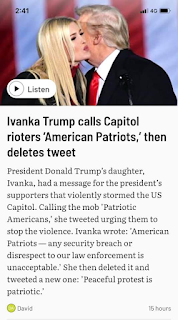 The job of any democratically elected government is to satisfy and fulfil the mandate given by the people in their most sacred and honoured duty every election cycle. Today, Americans should be able to rest easy in a celebration of democracy in action, but instead is faced with the challenge of our times.
But democracy cannot be rushed, and while we cherish each victory, we must equally consider each side-step or even step backwords, so that we may be better tomorrow. My thoughts and prayers go out to President-Elect Joe Biden, his incoming administration, and the American people as they weather these tribulations. - Anwar Ibrahim 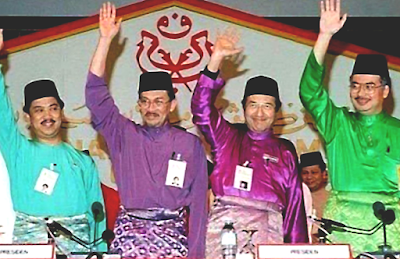 Malaysia’s Three Kingdoms...
The only way out of the current political quandary is for Tan Sri Muhyiddin Yassin to call for a general election. However, the timing is wrong. Right now, during Covid-19 pandemic, protecting lives comes first.
Yet, an election will come, sooner or later. We need to prepare for it. To understand the current political chaos, we have to appreciate a three-kingdom situation, whether in terms of political coalitions or voting blocs.
The Three Kingdoms from 220 to 280 AD were the tripartite division of China among the states of Wei, Shu, and Wu. The Chinese legend tells the epic story of savage competitions among the three states, all claiming to unite the nation. In both fact and fiction, it is a tale of political coalitions, diplomacy and trickery amidst a lot of plot twists. 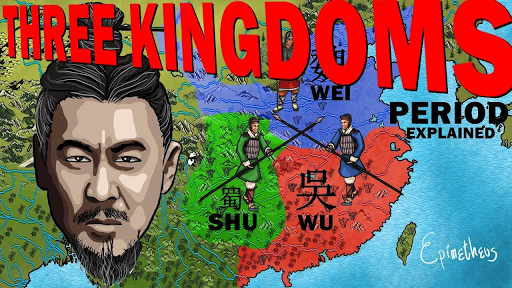 Evolution of coalitions
Malaysians were used to the dominance of a single political hegemon, in the form of the Alliance and later Barisan Nasional, from the 1959 general election to the 2008 political tsunami.
By 2008, a direct confrontation between two coalitions emerged until the Sheraton coup in February 2020 which toppled the newly elected Pakatan Harapan. Now we have now entered a three-way fight which is expected to last for quite a while, at least until the dust settles in the next general election.
Malaysian politics started with a big bang in 2021: almost all UMNO divisions rejected the party’s collaboration with Muhyiddin’s Perikatan Nasional government.  After betraying Pakatan Harapan, on 1 March 2020, Prime Minister Muhyiddin came to office by cobbling together a make-shift coalition of parties and renegade Members of Parliament through the Sheraton coup to constitute a bare majority. His government had a maximum of 114 MPs out of 222 seats in Parliament.
The coup coalition is fundamentally unstable with Muhyiddin’s own Bersatu has only 31 seats, of whom six were won in the 2018 election, 15 from UMNO crossovers after the election and 10 from Datuk Seri Azmin Ali’s Parti Keadilan Rakyat faction.
They were joined by Islamist PAS 18 seats, and supported by Gabungan Parti Sarawak 18 seats, Barisan Nasional 42 (with UMNO’s 39 seats) and several other MPs. (One UMNO MP has recently passed away). UMNO/Barisan Nasional has refused to join the Perikatan Nasional coalition; hence the ruling government consists of two coalition – Perikatan Nasional and Barisan Nasional.
The Opposition’s biggest bloc is Pakatan Harapan which officially consists of Datuk Seri Anwar Ibrahim’s PKR with 38 seats, DAP (42), Amanah (11). From Sabah, Datuk Seri Panglima Shafie Apdal’s Warisan has 8 seats while UPKO has one. Tun Dr Mahathir Mohamad’s yet-to-be-registered Pejuang has 4 seats while two of his former protégés Syed Saddiq Abdul Rahman and Dr Maszlee Malik are looking for new political vehicles.
Anwar is inclined to work with UMNO’s Datuk Seri Najib Razak and Datuk Seri Ahmad Zahid Hamidi to form a new government but DAP and Amanah are not comfortable with the idea. DAP and Amanah prefer that all on the opposition bench should unite as one bloc before negotiating with others. 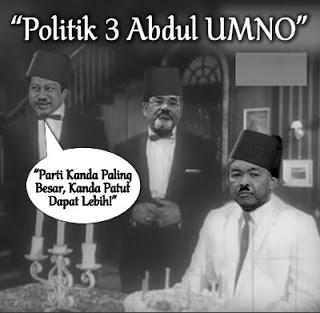 When election comes
To conceive Malaysian politics from now on requires us to think in a three-kingdom framework.  In terms of coalitions, there are now three coalitions:
1. Perikatan Nasional under Muhyiddin
2. Barisan Nasional under Najib/Zahid; and
3. Pakatan Harapan Plus under Anwar/Shafie/Mahathir.
What are the possible scenarios when the general election is called? Whether the Muhyiddin government survives in the short-term, it is very likely that UMNO will run against Bersatu.
PAS is more comfortable with Bersatu. It wants greater dominance in Kelantan, Terengganu, Kedah and Perlis. Since the break in PAS in 2015 which saw the departure of its more moderate faction, the current party leadership has no intention to win seats in West Coast mixed ethnic seats and aims to make it the kingmaker in national politics by winning as many seats in the ‘Malay belt’.
Bersatu would be able to concede almost all seats in these states to PAS as Bersatu is weak anyway. UMNO however would not give up the Malay belt seats to PAS as UMNO members in those states would not allow the leadership to do so.
UMNO is still very much led by Zahid and Najib with little remorse and without any reform agenda despite its defeat in GE14. There are talks of an UMNO resurgent but it is more about mobilising against Muhyiddin and Bersatu in times of economic hardship.  While UMNO has gained some ground, is very much at the expense of the Perikatan Nasional government which Barisan Nasional is also indirectly part of.
However, Zahid and Najib are still toxic to middle ground Malay voters, not to mention the wider national population. Either UMNO steps up to reform and promote a new leadership or there will still be a huge vacuum to be filled by other forces.
I don’t rule out the possibility that UMNO may embark on a journey of removing Zahid and Najib, and dealing with its lack of integrity in a serious manner. But so far that is not happening.  In such a three-kingdom scenario lies a huge vacuum for a resurgent Opposition grand coalition to fill. 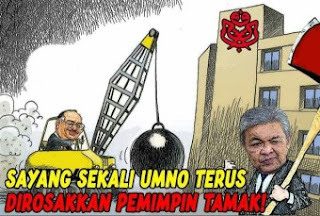 The possible outcomes
In terms of voting bloc, of the 165 Parliament seats in Peninsula, 65 seats are strongholds of the Grand Opposition that brings together strong non-Malay support and significant level of Malay votes in some selected geographical areas. Of the 65 seats, 55 had been won in 2008, 2013 and 2018 while another ten were won in 2013 and 2018. The grand Opposition is likely to retain these seats.
UMNO, even at its lowest ebbs when voters’ hatred against Najib and his wife Rosmah Mansor was collapsing on it, managed to win 54 seats in Peninsula in GE14. It was UMNO’s worst case scenario. Therefore, the remaining 46 seats in the Peninsula are the swing seats that would determine the future of Malaysia.
If the Grand Opposition could win another 35 seats on top of the 65 seats, i.e. winning 100 seats in the Peninsula, it will reach the minimum 112 seats to form a majority government with the help of seats from Sabah and Sarawak.
Right now, we are facing a three-kingdom scenario where the grand Opposition should begin thinking about the 65-seat voting bloc it has in the Peninsula. It must devise a strategy to become the largest bloc in a three-way election.
Even if UMNO and Bersatu as well as PAS are on the path of their civil war, the Grand Opposition should remember one thing: do not give Zahid and Najib a free pass to walk away from prison. It’s difficult to forgive them for the damage they had done to our beloved country. - Liew Chin Tong 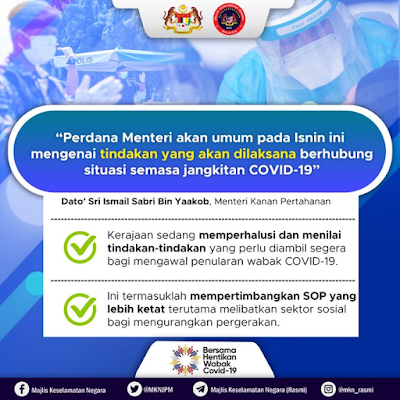 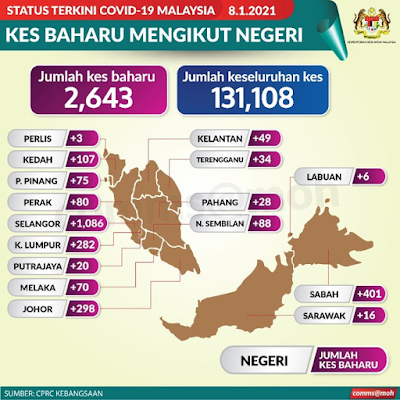 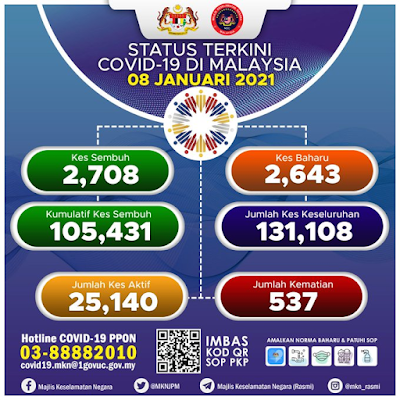