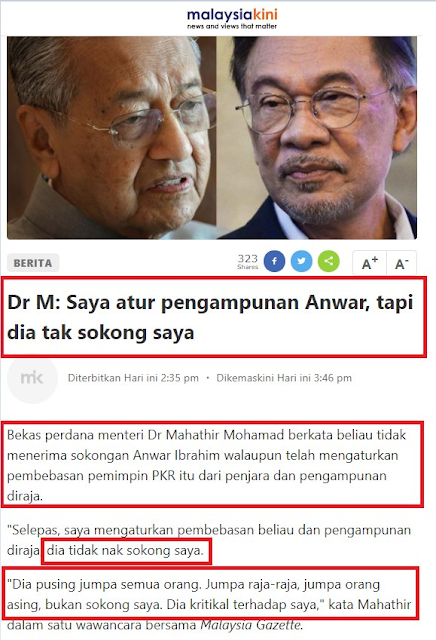 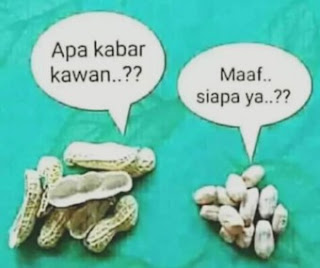 The way Mahathir made it sound was like Anwar owes something to him. Fact is the pardon was part of the deal. So Mahathir was only honoring the deal. Done. He also claimed Anwar being critical of him. But there is plenty of proof online of Mahathir being extremely critical and cynical of Anwar to the extend of re-affirming that he did the right thing by locking up Anwar. - And Justice For All
Sudahlah Mahathir. It was a compromise. Wan Azizah allowed you to be the PM on condition that you get a pardon for Anwar from the Agong. So don't talk big now. By back stabbing Anwar showed what type of a person you are. Just retire and shut up. No one is bothered to listen to you. - Wong Fei Hoong
Sour grapes. Without Anwar (and PKR) and DAP blessings you could not become Harapan leader and then PM. You created the crony capitalism, racial politics, licensing corruption and undermining community cohesion which is now running blindly at high speed over the cliff. - Winter As Come
No, Mahathir, you didn’t get Anwar pardoned and released. On the contrary, you tried to put a spoke in the wheel in the process, hoping to derail it, as apparent from the following sequence of events. On May 14, 2018, Monday, you said the process of pardon “will take some time as we need to adhere to the rules”. However, the Palace issued a statement on the same day that the Agong was satisfied with the procedure and that the Pardons Board would meet the next day, May 15. It was on the Agong’s insistence to have the pardon procedure completed before the start of the Ramadan month (starting on May 17) that the meeting was finally agreed on May 16.
Significantly, it was not you Mahathir, but Anwar’s family who submitted the petition for pardon – on ground of “miscarriage of justice”. - Kim Quek
Mahathir, you dah nyanyuk. Anwar was pardoned DESPITE you and not because of you. The rakyat voted in PH on one of the premises that Anwar would be pardoned. And I think it was LGE who first raised the matter with the then Agong. Please don't take credit for something you didn't do . You had to go along with the agreement and the rakyat's expectation then. If you had had your way, you would have try to stop Anwar's release . Obviously the previous Agong saw through you and offered Wan Azizah the PMship instead. Even though she was a woman but the then Agong was unfettered by the Islamist and traditional thinking of the Malay psyche. As to whether Anwar can secure the numbers to bring down the PN government, it does't concern you since you have said that Pejuang will not support Anwar. You won't support Anwar but you want Anwar and everybody else ( including the rakyat) to support you. I wish Anwar the best of luck and hope he succeeds to bring down the government you brought in through your dishonouring the agreement, time and time again. - Anonymous 5035
Put it this way Tun. He did not support U because U are not honest and U played his back. - Geram 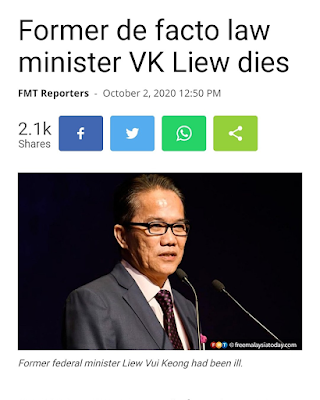 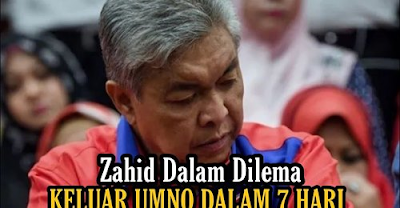 UMNO Falling Apart - Zahid Is Toast If
He Fails To Topple Muhyiddin By Christmas...
Zahid Hamidi blinks. The indecisive UMNO president was trying to play safe when he declared Bung Moktar, the Sabah BN (Barisan Nasional) Chief, had been granted autonomy to decide on Sabah Chief Minister if the coalition emerges victorious in the state election. Actually, Zahid did not want to get the blames in case BN lost the election, hence he put Bung in charge.
But Bung is a joker, not a leader. In fact, the man with a foot in the mouth is not fit to become a state assemblyman, let alone a chief minister. Zahid likes Bung because he is the only one left in UMNO who talks and looks dumber than him. Together with Bung, Zahid feels like a genius all the time. Zahid made the second mistake when he did not take charge after BN won the most seats in Sabah.
Prime Minister Muhyiddin’s hastily glued alliance – Gabungan Rakyat Sabah (GRS) – won a total of 38 Sabah State Assembly seats – just one seat above the minimum 37 required to form the state government. Out of the 38 seats won by the GRS, Perikatan Nasional won 17 seats, Barisan Nasional grabbed 14 seats and PBS (Parti Bersatu Sabah) captured 7 seats.
Zahid Hamidi - Given 7 Days To Pull Out Of Perikatan Nasional
Perikatan Nasional Sabah, despite winning 17 seats, is itself a coalition made of PPBM (11 seats) and STAR (6 seats). All of Barisan Nasional Sabah’s 14 seats were won by UMNO alone (its members PBRS and MCA lost every seat contested). Hence, UMNO argued that even though Perikatan won more seats than Barisan, it doesn’t count as Perikatan is a coalition.
As a party, it is UMNO (not Perikatan) that won the most seats in GRS. Therefore, in a proper order of which party wins the most seats, UMNO comes top with 14 seats, followed by Muhyiddin’s party PPBM (11 seats), PBS (7 seats) and STAR (6 seats). UMNO president Zahid Hamidi said – “The chief minister from GRS must be chosen from UMNO.”
Yet, the thuggish Java-immigrant did not follow through with his threat. He lost control of BN Sabah as well as UMNO Sabah the moment he decided to give a clueless clown like Bung Moktar the free hand in running the show. Besides screaming “Fuck You” in Parliament, gambling in the nearby Philippines casino and stealing money with his wife, Bung is practically useless.
Mr. Bung looked like a fool at the negotiation table. He only managed to get the deputy chief minister post. Even then, he was easily tricked and almost short-changed by newly installed Chief Minister Hajiji. Despite an earlier promise to give Bung the important and lucrative portfolio of works minister, Hajiji had tried to scam him with local government and housing minister post.
It was only after Bung cried, whined and threatened to pull out of the new state government by calling a press conference that Hajiji switched back the portfolios. Clearly, Muhyiddin’s boys tried to test how far could they bully and insult the Sabah UMNO Chief (and UMNO president Zahid for that matter). And backdoor PM Muhyiddin has just found out that Zahid isn’t that strong after all. 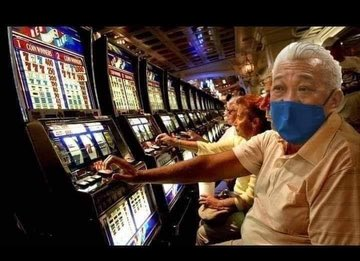 Bung Moktar syiok di kasino...
Under Bung and Zahid leadership, UMNO actually did badly in Sabah. Having won 14 seats out of 32 seats contested, the success rate is only 43.75%. PPBM did better when it captured 11 out of 20 seats contested – a success rate of 55%. To add insult to injury, Muhyiddin had secretly funded Independent and ally PBS candidates to sabotage Sabah UMNO candidates.
As we had said previously, Muhyiddin and his gay lieutenant, Azmin Ali, are the most despicable traitors and pretenders who would not think twice about stabbing friends in the back. The Sabah state election has demonstrated how toxic Muhyiddin is, whose fake humbleness has been mistaken as weakness. UMNO now knows the true colour of PPBM.
Perhaps the clueless Zahid still hasn’t figured out how UMNO Sabah was played by PPBM in the Borneo state’s election. But PM Muhyiddin, Senior Minister Azmin Ali and Home Minister Hamzah Zainudin cannot fool former PM Najib Razak. That’s why Najib’s loyalist, sacked UMNO Supreme Council member Lokman Noor Adam, issued a mind-boggling warning to Zahid.
Things must have gone really bad for Lokman to threaten a sitting UMNO President – giving Zahid 7 days to teach Muhyiddin’s party PPBM (Bersatu) a lesson for bullying, ridiculing and belittling the UMNO Malay nationalist party. Zahid has even been warned that his presidency in the party could be on the chopping board if he does not act against the arrogant backdoor prime minister.
It’s hard to blame Najib faction in UMNO for drawing the knife against Zahid’s perceived weak leadership. As the UMNO president, Zahid is supposed to drive the party towards election victory and to assert the party’s dominance. Instead, UMNO has been seen as getting weaker since the return of Zahid, so much so that the grassroots believed UMNO kowtows to PPBM every time.
Najib, who is upset that he was sent to 12 years in prison for abuse of power, money laundering and breach of trust (CBT) in addition to RM210 million of fine, knew Muhyiddin’s evil plan to take over UMNO. Najib and Zahid would be sent to jail because they are political threats to Muhyiddin. Without both leaders, UMNO will be leaderless and rudderless.
Opportunists like UMNO deputy president Mohamad Hasan has also sharpened his knife against his boss, getting ready to take over the party leadership when both Najib and Zahid are behind bars. As long as Mohamad Hasan is subservient to PM Muhyiddin, UMNO’s greatest assets that PPBM lacks – grassroots and machinery – can be milked to make PPBM a dominant and powerful party.
That was the grand plan of Muhyiddin and Azmin. First, they will send Najib and Zahid to prison. Then, they will merge or rejoin UMNO, provided the majority of the warlords agree to kneel and bow before Muhyiddin as UMNO president. If that is not possible, they will appoint a proxy. And there is a great supply of such nominees, thanks to 61 years of the party’s culture of corruption.

Disgraced warlords like Mohamad Hasan, Hishammuddin Hussein and Khairy Jamaluddin (pix,above) are some of the candidates who are willing to play second fiddle to PPBM. That’s why Najib desperately wants Zahid, a well-known UMNO gangster, to make the move to checkmate Muhyiddin, before the prime minister gets too powerful and his party becomes more dominant.
The fact that Sabah chief minster Hajiji, obviously an errand boy of Muhyiddin, had to make a U-turn to accommodate Bung Moktar’s demand for the portfolio of works ministry shows that PPBM is still weak and could not afford to go against UMNO unnecessarily, at least for now. Therefore, the golden opportunity is now for UMNO to strike back before it’s too late.
At the same time, UMNO also realized that the national cooperation between the party and PAS Islamist party, glorified as “Muafakat Nasional” under the pretext of Malay-unity, is under threat. To put it mildly, the alliance is melting. The Islamist party prefers Perikatan Nasional, an alliance of UMNO-PPBM-PAS, as it creates a “Triangle of Power” to check and balance each other.
UMNO is extremely confident that if BN and PAS join forces, they can win the next 15 General Election without having to share the spoil of war with PPBM. But PAS knew it would play second fiddle to UMNO. Without UMNO, however, PAS has no confidence of winning, even with Muhyiddin’s popularity. Worse, it would create three-corner contests that could benefit opposition Pakatan Harapan.
The UMNO’s strong grassroots and powerful machinery are increasingly upset over Zahid’s lame and incompetent leadership, allowing a smaller party PPBM insult and bully the big brother UMNO. To teach Muhyiddin, Azmin and Hamzah a lesson, they are willing to work with enemy PKR president Anwar Ibrahim. They thought the desperate Anwar could be controlled.
Zahid has to decide fast and take advantage of the grassroots’ anger toward the ungrateful PPBM. He must remember that he won the UMNO presidency in 2018 with just 99 out of 191 divisional votes – just 52% of the total votes. Even then, he won with vote-buying. Like it or not, the war has started. If Zahid fails to topple Muhyiddin by Christmas, allowing the PM to win the Budget Day on Nov 6, he is toast. - FT 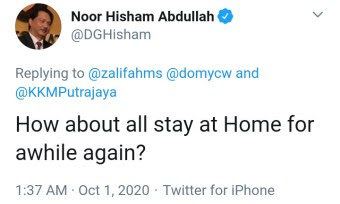 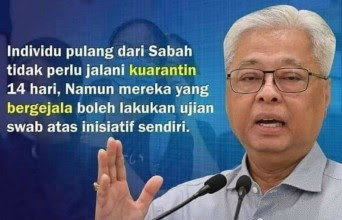 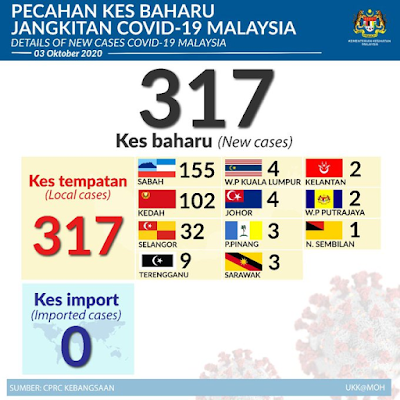 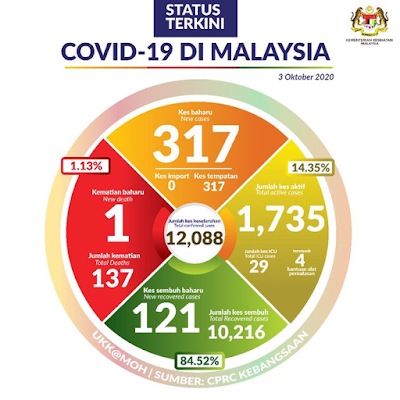