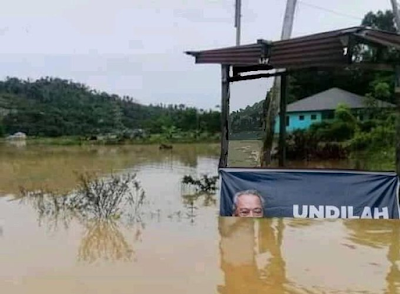 “‘Abah’ wants to cane the people. Why don’t he start with his own ministers? The people are okay, you are the stubborn ones,” said PKR’s Johor Baru MP Akmal Nasir.
Muhyiddin and his supporters have referred to him as “abah” since he took power, in a bid to cultivate a warm paternal personality with the public.
“You want to cane? Cane the minister Takiri first,” wrote Muar MP and former youth minister Syed Saddiq Abdul Rahman. - malaymail 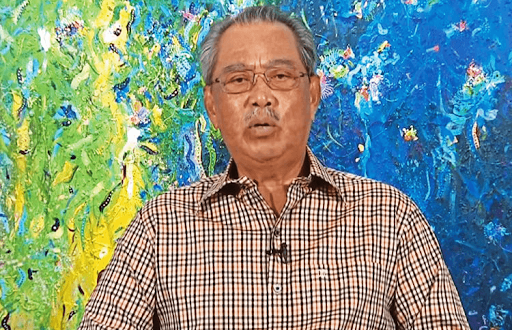 A 1-Year-Old Baby Has Died, Yet
Muhyiddin Could Joke About “Abah” and “Rotan”...
Facing a backlash for creating a new wave – Third Wave – of Coronavirus infections, Muhyiddin Yassin was forced to do some damage control. His speechwriter must have thought the backdoor prime minister could once again hoodwink the simple-minded and ignorant Malay voters by flashing his trademark “Abah (father)” gimmick to cleanse his sins.
If a crook like former Prime Minister Najib Razak could smile and walk freely with his shameless “Malu Apa Bossku” (What’s the shame, my boss?) moniker, how hard could it be for PM Muhyiddin to also shamelessly use “Abah” to offset or erase all the sufferings – including deaths – of innocent people infected by Covid-19 as a result of his lust for power?
His PR team has been cracking heads to twist and spin the Sabah Clusters of Coronavirus. Everything started when the power-hungry PM “engaged” former Sabah Chief Minister Musa Aman to snatch power from Sabah Chief Minister Shafie Apdal through a coup. Shafie foiled Muhyiddin’s second coup when he advised Sabah Governor to dissolve the Legislative Assembly – leading to a state election.
However, during the election campaign from Sept 12 until polling day on Sept 26, social distancing was not fully enforced or practised. For obvious reason, the police did not take any action against politicians (especially Muhyiddin’s band of defiant and arrogant ministers), campaign volunteers or supporters for breaching the health SOP (standard operating procedure).
Yesterday (Oct 6), thanks to “Muhyiddin Cluster”, Malaysia has reported 691 new cases of Covid-19 in the past 24 hours – breaking another new record. In essence, the country has plunged into its worst Coronavirus level since the pandemic started in January. To make matters worse, there were four deaths yesterday, including a one-year-old toddler. The blood is on Muhyiddin’s hands. 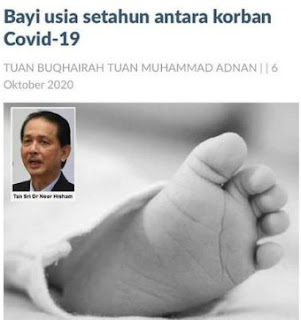 Earlier, drama queen Muhyiddin had blamed foreign immigrants in Sabah for the sudden spike in infections. But yesterday, during a live telecast from his home where he is undergoing his 14-day mandatory quarantine period, the prime minister finally admitted that the campaign in the just concluded Sabah state election was among the probable causes of the spike in Covid-19 new cases.
Still, he blamed people who did not observe social distancing and refused to wear face masks. He blamed the lack of border control in Sabah. He blamed the lack of screenings. He blamed illegal immigrants for the Sabah Clusters. He blamed prisoners, who later infected their detention centres, for the Kedah Clusters. Heck, he even blamed people who criticized his administration for politicising the situation.
The clueless and useless prime minister talked as if it was the opposition, not his government, who runs the prison, immigration and border patrols. Like President Trump, PM Muhyiddin blames everyone and everything under the sun and moon, but himself. He appears to have forgotten that he’s the PM, indirectly admitted the incompetency of his own backdoor government.
The “munafiq” prime minister claimed that his government does not practise double standards in enforcing the 14-day self-quarantine. He bragged about his own quarantine as proof, along with seven other ministers and six deputy ministers who are also currently under quarantine at home. Muhyiddin must have thought that all the people are as dumb as his half-baked ministers.
In truth, Muhyiddin and his ministers reluctantly locked themselves up in quarantine because they were either infected or exposed to Minister of Religious Affairs Zulkifli Mohamad, who was tested positive for Covid-19 after he skipped self-quarantine for 11 days since returning from Sabah. But how did so many ministers come into close contact with Zulkifli?
Apparently, the PM was chairing a special National Security Council meeting on Oct 3 that was also attended by Zulkifli. Exactly why a religious affairs minister was in the meeting is beyond comprehension. Among those present were four Senior Ministers – Ismail Sabri Yaakob, Azmin Ali, Fadillah Yusof, Radzi Jidin – and Abdul Hamid Bador (Inspector-General of Police) and Chief of Defence Force General Affendi Buang. 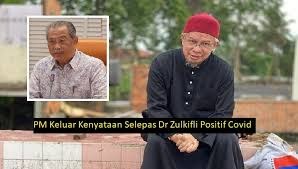 Here’s the best part – Muhyiddin was exposed to have a golf program at Lotus Desaru Beach Resort. The golf tournament – 2020 Founders Cup – started from Oct 1 to Oct 4. So, like Najib Razak, who golfed with Barack Obama in 2014 while his country battled the worst floods in decades, Muhyiddin was eager to play golf while the nation was plagued with a new wave of Coronavirus.
It was both pathetic and entertaining to hear the prime minister saying that now is not the time to look for someone to blame for the spike in Covid-19 cases, the new wave of infections that would not have had occurred if he did not try to snatch power in Sabah. Was it not his regime who had been blaming the previous Pakatan Harapan government for the earlier wave of Coronavirus cases?
Muhyiddin’s blue-eyed boy, gay Senior Minister Azmin Ali, had previously claimed that more Malaysians would have died from Covid-19 if Pakatan Harapan were still in power. The fact is, the country registered its first death on March 17, more than two weeks after Muhyiddin and Azmin’s betrayal. Hence, it’s not an exaggeration to say that all the 141 Coronavirus deaths are on Muhyiddin’s hands.
It appears that karma has arrived earlier than anticipated. Less than two months after Azmin bragged about the excellent job done by his boss in containing Coronavirus, the virus returns in a bigger wave to teach the arrogant backdoor Perikatan Nasional a lesson. Go ahead Muhyiddin and Azmin, quickly claim credit again for winning the war against the virus.
When the people on the street obediently observed the social distancing and wearing masks leading to the flattening of the Coronavirus curve, Muhyiddin took all the credit and blamed the previous government. When his own ministers disobeyed the same set of procedures, Muhyiddin told people not to point a finger at him and blamed immigrants and prisoners instead.
Worse, despite the death of a one-year-old toddler, Muhyiddin somehow finds it amusing to use his trump card “Abah” to joke that as the “father” of 33-million people, he has to start using “rotan (cane)” against people who breach the SOP (standard operating procedure). He should stop making people’s toes laugh with his dumb drama. 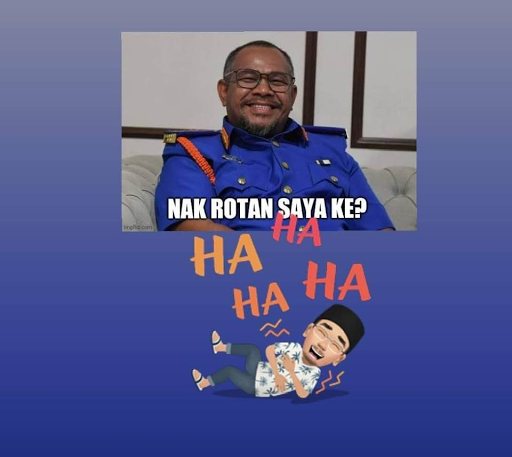 Not only the prime minister should cane himself first for triggering the 691 new cases of Covid-19, he should also explain why his own minister, Khairuddin, remains untouchable despite two months’ of police investigation. Mohd Khairuddin Aman Razali had visited Turkey from July 3-7, but upon his return from Istanbul, he skipped the 14-day mandatory quarantine.
The police and the Attorney General’s Chambers have been passing the ball – investigation papers – to each other millions of times, as if the case was more sophisticated than the 1MDB scandal. Based on the public anger on the social media over the special treatment accorded to his own ministers, Muhyiddin’s “Abah” stunt has backfired spectacularly.
Stunningly, despite a record 691 Covid-19 new cases, PM Muhyiddin said that his government has not considered enforcing a nationwide lockdown again, arguing that doing so could lead to the collapse of the social and economic systems. He appears to have admitted his own mistake in locking down the nation back in March, when he ordered the MCO (movement control order) from March 18-31.
Exactly how the backdoor government justified that there was a need for a nationwide lockdown in March when the daily cases spiked to 190 cases but argues that the same lockdown is not required despite a spike of 691 cases? Should not the incompetent government at least lock down Kedah, the state with the highest number of infections?
Does the backdoor government have any threshold to restart the lockdown again? Based on the exponential surge of cases, it’s safe to predict that it’s a matter of time before new infections breach the 1,000-milestone. Will Muhyiddin lock down the nation by then, with more deaths recorded daily? With so much inconsistency and hypocrisy, this PM should be ashamed to have the cheek to call himself “Abah”. – FT 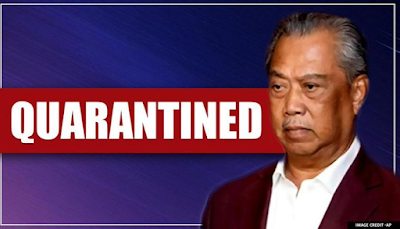 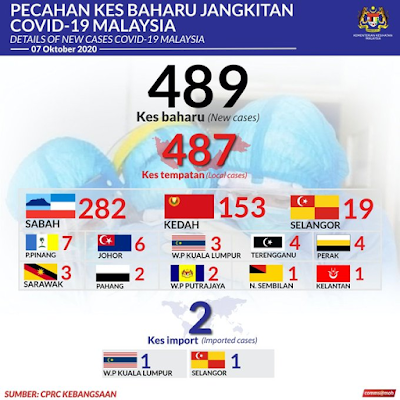 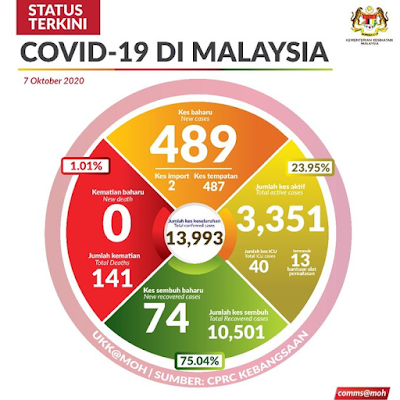