Events unfolding the last weeks reached a climax when the Pakatan Harapan government, led by Dr Mahathir, reneged on its promise to ratify the much-anticipated UN-sponsored Rome Statute. In doing so we have joined the ranks of other non-signatory countries such as the People’s Republic of China, India, Saudi Arabia, Israel and Indonesia, to name a few. Incidentally, United States of America and Russia were signatories once but have since withdrawn ratification for reasons best known to them.

The Rome Statute forms the basis for the establishment of the International Criminal Court (ICC) at The Hague. It was adopted following a diplomatic conference in Rome on July 17, 1998, and was enforced worldwide on July 1, 2002. As of March 2019, 124 member countries of the United Nations are party to the statute. Unfortunately, Malaysia is one of the handfuls of countries who has yet to ratify.

The Rome Statute oversees four international crimes namely, genocide, crime against humanity, war crimes and the crime of aggression. The ICC can investigate and prosecute those committing the aforementioned crimes when states are unable or unwilling to do so themselves.

The arrest of Chile’s dictator General Pinochet in London on October 10, 1998, for numerous human rights violations in Chile and his subsequent trial in Chile, is a case in point. Pinochet was also accused of amassing over USD28 million when he was the de facto leader of Chile from 1974 to 1998.

In short, the ICC is a court of last resort to prosecute those who committed atrocities in places where national authorities could or would not step in. Had America not decided to use Emperor Hirohito as “a tool to control Japan” he would have been tried along with his Prime Minister, General Hideki Tojo.

Hypothetically speaking, had Najib Razak refused to concede defeat in spite of his party’s loss in the May 9, 2018, general elections and, aided by a corrupt Election Commission, no official results were forthcoming, Pakatan Rakyat would remain in political limbo for good. Scandal-plagued Najib, having gained the upper hand, would declare a state of emergency to reinforce his power. The police and the military would meekly follow whatever Najib told them to do. After all, cousin Hishamuddin Hussein was the Defence Minister and Javanese immigrant, Zahid Hamidi, was the Home Minister.

To flex his political muscle Najib would have decreed that all opposition leaders be incarcerated while his one-time mentor now nemesis, Dr Mahathir be abducted just like Pastor Koh and activist Amri Che Mat using the Police Special Branch to do the dirty work. And while his enemies languished behind bars Najib, his wife Rosmah and his corrupt ministers would continue to plunder the nation and live happily ever after.

If the above scenario happens what can we do? Frankly speaking, there is nothing we can do other than to knock ourselves silly for allowing the unthinkable to happen. However, had the country signed the Rome Statute, Najib could be investigated and prosecuted for committing one of the four fundamental crimes mentioned.

It is simply ridiculous that a likeable monarch like Sultan Ibrahim of Johor would object to the country ratifying the Rome Statute. There are absolutely no discernible reasons why the sultans should reject the international treaty unless they have plans to commit the four international crimes – genocide, crimes against humanity, war crimes and crime of aggression.

And like the ICERD (International Convention on the Elimination of All Forms of Discrimination) Prime Minister Dr Mahathir on Friday, April 5 announced that Malaysian would make another U-turn by not endorsing the Rome Statute.

On the same day Umno kingpin Ismail Sabri, the former Minister of Rural and Regional Development, announced that Selangor Umno would protest to the Sultan of Selangor against Malaysia acceding to the Rome Statute as “it affects the sovereignty of the Malay rulers” he claimed.

Well, it does not take a rocket scientist to conclude that after inciting the Johor Sultan, Umno is roping in the Selangor Sultan to go against the Mahathir government. And it is not difficult to put the sultans at loggerheads with Dr Mahathir, as the grudge between the two started decades ago in 1993 when Mahathir stripped the royalty of its legal immunity.

There were even rumours of a possible military coup should the inevitable happen. Being a former soldier I am somewhat amused by these revelations. Coup is a foreign word to our armed forces. The closest the country had come to one was when General Mohamad Sany, the then Army Chief, threatened to let soldiers on the streets if their demand for a pay revision was not entertained by the government. This was in 1972. Fortunately, nothing untoward happened.

The general consensus is Mahathir is pussyfooting in sending all these Umno goons to prison for corruption, money laundering, grand larceny, tax evasion and what have you. Instead in an attempt to hasten the transformation his nascent political party PPBM (Bersatu) into an Umno lookalike he has been happily accepting corrupt lawmakers from Umno.

And worse, Mahathir’s own party lacks talents so much so that even leaders with fake degrees are being treated like lords. Instead of leveraging on his earlier promise to promote meritocracy and communality, he chooses to play the overused 3R game – race, religion and royalty. This concoction is deemed unsavoury and counterproductive as well.

It is one U-turn after another and peace-loving Malaysians are beginning to get tired of this charade. The more they see apa malu bossku mucking around in his white round-collar T-shirt, the more pissed off they will be. - Fathol Zaman Bukhari,Ipoh Echo

Putrajaya to call the bluff of Rome Statute opponents 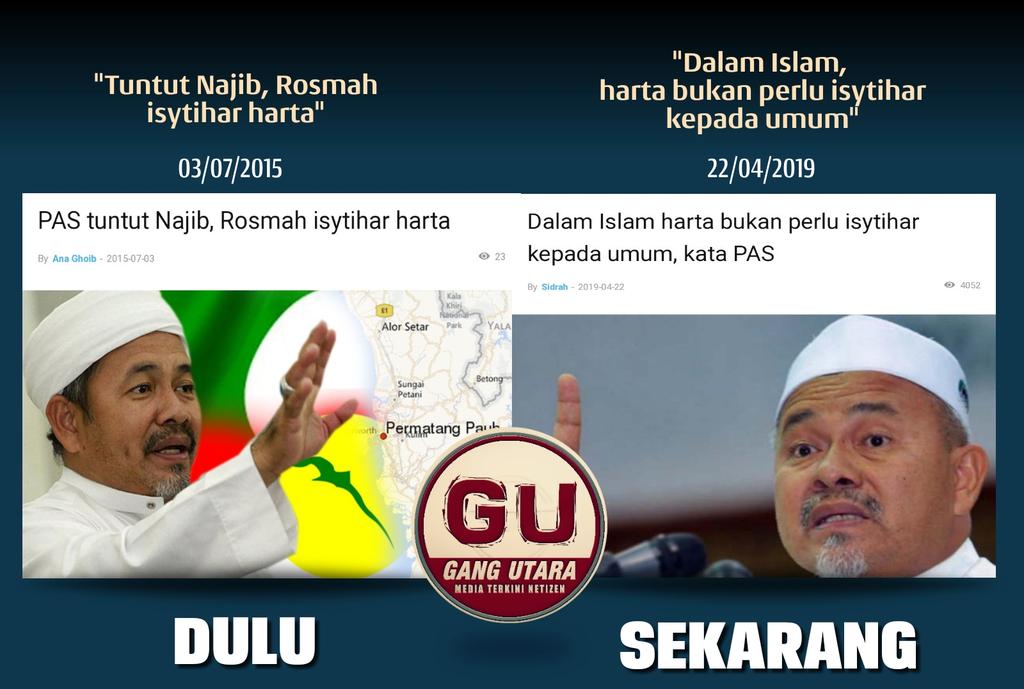