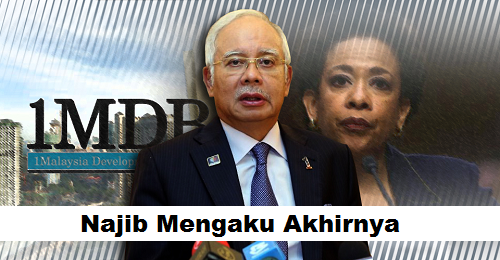 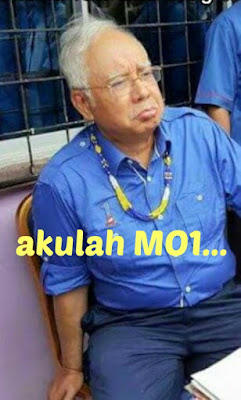 Yes that is what Rahman Dahlan is also saying. That there is NO ARAB DONOR.

Here is Malaysiakini with the same story...

OSTB : I say kalau ini macam ah, then why didnt the ahli kabinet kleptokrasi just admit this from July 20th when the US DOJ made that media statement?  Why have they been denying that Najib is MO1 for so many weeks.

One anak s*ndal even said that MO1 was the DYMM Agong. Sudah lupa kah?

The prepaids aka blogger pelacur have been talking rubbish about this as well.

Now the Minister Abdul Rahman Dahlan (who by the way is the Barisan Nasional's  Strategic Communications director) has strategically communicated to the whole world that Najib is MO1.  Case closed lah.

Rahman Dahlan now confirms that this thief who defrauded the Malaysian people is Najib Razak.

By confirming that Najib is the MO1 described by the US AG, Rahman Dahlan now also confirms the rest of the US AG's statement ie there is no mysterious ARAB donor either.

Never before in our history has there been a more stupid group of people who were members of a political party who admitted publicly that their leader was a thief and still accept the thief as their leader.

Never before in our history has there been a more stupid group of people who were members of a Cabinet of Ministers who admitted publicly that their leader was a thief and still accept the thief as their leader.

Never before in our history has there been a more stupid group of people who continued spinning stories to cover up for their leader who has already been confirmed as a thief by their own Minister.

If Najib is MO1, are monies in his account 1MDB funds? 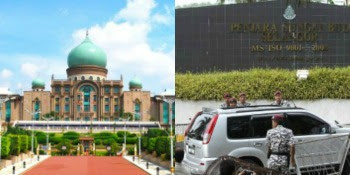 From Seri Perdana to Sungai Buloh - A journey awaits!

Someone asked me recently, if Najib will be prime minister for any much longer? As I pondered an answer to that question someone else ventured an opinion that Najib will be PM for as long as Umno backs him up...and that, looks like, forever.

I asked if Tunku was still PM? Is Razak still PM? What about Hussein Onn, Mahathir and Pak Lah...are any of them still PM? For you see being PM of any country is not one that you do for life. 22 years seems to be the record for any one to be PM. How long Najib will be PM for is to be seen.

There is one significant difference between Najib and all the other PM's that came before him. All the other PM, with the exception of Razak who died in office, all of them retired - none of them spent their retirement in Sungai Buloh.

Najib will go where Marcos, Suharto, The Shah of Iran, Gadaffi, Ceicescu, Idi Amin and their likes have gone - either to a premature death via execution, exile or, as in Najib Razak and Rosmah case, Sungai Buloh, after a suitable period spent in the courts pleading their case.

I can already see some of you smiling ...you already know where I am going. "Yes" brothers and sisters...for Najib and Rosmah, it is either Seri Perdana or Sungai Buloh - with a possible short window of opporutinity to pack in between the time from Seri Perdana to Sungai Buloh...though it must be said that that short time to pack is more than enough for you do not need much even for an extended stay in Sungai Buloh.  Anwar would be the "go to person" for Najib and Rosmah to get advise from on this!

The problem we now face is that our "enemies" within the country wear the same clothes as we do. Their children go to the same school as ours do. Some are our neighbours and others shop at the same shops as we do....and yet in thoughts and deeds we are so very different.

There was a time when the Malays in Umno proclaimed "Umno right or wrong"....and the Malays would rally to their cause. When Umno was fighting for the right causes and it's leaders were the true champions of the Malays and Malaysian everywhere, Malays and  Malaysian voted for Umno and BN. But not anymore. Not when Umno is about the vested interest of its political criminal elites, not when corruption and money politics are embedded in the very veins that gives life to Umno. Not when Umno is about Najib and Rosmah!

In Australia, more often than not in any general election, you go to vote, go to sleep and wake up to the results - a new PM or the current PM is retained. In the recent decade in Australia, you go to sleep on the night of the election not knowing who will be PM by the next morning - that is how close the election has been. It is the people that decides the outcome.

In Malaysia even when you have got the numbers to claim a popular mandate - as Pakatan Rakyat did in the last election, you are still denied government. Elections are bought legally and illegally. The people are duped, scammed and most times simply told lies so that the incumbent PM holds on to political power. There is certaily no political democracy anywhere to be seen in Malaysia. What more democracy, for the masses.

But at each general election, the time for reckoning nears. At each election, real opposition to BN grows not only in the number of votes they lose but also their numbers in parliament dwindles.

For this BN under Najib Razak the illusion of might and power seems to be almost complete. Is not the leader of the opposition languishing in jail? Has not the Pakatan Rakyat that won the popular mandate at the last election dismantled and buried under piles and piles of concrete with PAS now on side with BN to add insult to injury? Has not BN taken back Perak and Kedah?

For sure all this true. what is also true is that the BN coalition is still a one-party political entity. In all things BN it is always and has always been Umno, Umno and Umno. MCA has lost its place in the hearts of the Chinese and MIC, is as always, what the Indians have been to themselves - a disappoint of the kind that sees no end to the malaise and impasse that successive greedy leaders have imposed upon their own kind. In Sabah and Sarawak an uneasy balance between power, greed and the odious practice of money politics prevails at the expense of the people. All these are illusions for the reality augers ill for Umno. The success or failure of what Mahathir and Mahyuddin wants to do with their new politicl entity can only be measured by the nuber of Malays in Umno who will cross over to their new political entitiy. Will it be an exodus or a trickle?

Always these choices have left the Malays confused and divided. Always the Malays are not faint at going for each others throat weakening again that once solid Malay block that Umno once presented to the "others" which in the past had allowed the Malays to dominate unquestioningly and for Umno to represent the Malays without any real challenge to their claim to be the "Champion for  and of the Malays".  But not anymore.

Today whenever I write of Najib, Rosmah, Umno and its coalition partners in BN, I am certain of an audience of readers who not only read what I write but are not shy of voicing their contempt and disgust at what the leader of Umno are now doing to relegate our country to the ranks of the most corrupt in the world and heading towards talk of Malaysia being a "Failed State"...and interestingly enough comments are no longer made by "anon" or "anonymous"! No one is now afraid of putting their names against any negative or "ISA inclined" comments about how corrupt Najib and Rosmah are.

About how money politics is needed by Umno and its coalition partners as air and water are needed by us all to survive. Not anymore...you are no longer afraid of standing up and being counted.

For now, the wheels of Justice have begun to turn against Najib and his corrupt cohorts but even as they turn, they are still being thwarted by the relentless persecution by Najib and his cohorts, of those who seek to expose their wrong doing and corrupt ways of government. But already chinks are beginning to appear in Najib's armour.

The US DoJ has moved and moved decisively against 1MDDB and 1MDB is linked directly to Najib. And closer to home, Rosmah son by another marriage is named as one of those being hunted by the US DoJ for activities that children of the PM's wife should not really indulge in.

Already a growing tide is being turned against Najib within Umno. Some are still vocalizing dissent while others have done what they should have done years ago - turn their back on Umno. The MCA is as relevant to the Chinese as MIC is to the Malays.

With that twit of an IGP still embedded within PDRM, PDRM is still under the armpit of Najib and we await when that once much respected PDRM will surface for some fresh air. The same can be said of the Judiciary and government departments and civil servants - all servants to that most neccessary of life's needs : dedak. But the government is leaking like a seive, PDRM gets hantamed everytime they do Najib's bidding, and all eyes and ears are tuned acutley to detect any further trangressions by PDRM and anything other part of the government that deems itself to be Najib's ball carrier and whtever part of Kak Rosmah they want to carry for her.

So the prognosis is that the tide is turning against Najib. Like the impatient durian plantation owner that awaits the first durian to fall to signal the start of his "durian runtuh" season, most Malaysan are eagerly and impatiently waiting for that tide against Najib to turn into a Tsunami of sorts.

I have no reason to believe otherwise. It is open season in the hunt for Najib Razak, Rosmah Mansor and Umno...andother BN partners will suffer collateral damamge - of that we are all certain.

But first things first. First Najib, Rosmah and then Umno! Who dares to predict that Najib, Rosmah and Umno will not be bedfellows in Sungai Buloh in the not too distant future? 2017 perhaps. Perhaps earlier! Whenever that is...it cannot come too soon! - Hussein A.Hamid,steadyaku47 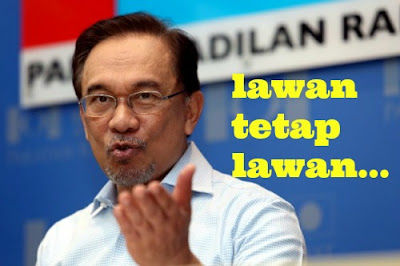