Recently I said that a Cabinet reshuffle was in the works and that the Chairman of Tabung Haji as well as the mami woman would be back in the Cabinet. Well, both have not happened - yet.

Recall I blogged a loooong time ago that Mukhriz Mahathir (who was still MB of Kedah at that time) was to be dropped from the Majlis Tertinggi? Caused quite a ruckus in Kedah. It did not happen either, at that time. But Mukhriz has since been chopped and dropped.  Ultimately it did happen.

The source of my info for both the above is the same. Cavalero mucho grande.

To all you critics of Tun Dr Mahathir, can you tell us what was Dr Mahathir's reaction when his son was axed as MB Kedah? He hardly said anything. Mukhriz has to beat his own path in his political career.  Just like when Dr Mahathir was PM for 22 years he did not allow any of his kids to become even Ketua Cawangan UMNO.  So all this talk about Mukhriz becoming the next PM is just that. If he does, it will be through his own effort and work. 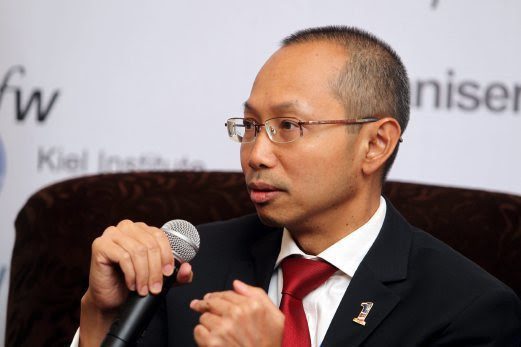 Wahid Omar(pix above) has left the Cabinet on June 4th - prematurely people say because his senatorship could have been extended another three years. I believe Wahid bin Warak came to his senses. He was inside a den of thieves - the biggest thief being his mentor who had been charting the course of his career.

Rumour is that Rahman Dahlan (who has gone deathly quiet - have you all noticed) wants out of the Cabinet. This has apparently been going on for a few weeks or months. Rahman is possibly undergoing another 'mencari kebenaran' phase in his life as well.

Unless you have exceptionally thick skin, any normal person will go quite insane pretending not to see all the stealing, thievery and all the crap that is going on in the gomen.  Looks like Rahman Dahlan may be cracking up as well.

Rahman Dahlan (pix below), if you quit the Cabinet, then of course we cannot call you stupid anymore.

The other person now rumoured to want to quit is Dato Mustapha Mohamed (pix below), the Minister of MITI. An sms from some connected people (Chairman, Majlis Tindakan Eko.. ...) said that there has been a "falling out between Tokpa and Najib".

Either on the way out or he wants to leave.  I wont be surprised. The fact is Tokpa wanted to leave even before the last GE but was asked to stay on.

As I said you must have exceptionally thick skin to still pretend not to see or smell all the sh*t that you are sitting on, everyday. Tak malu ke? Your boss is not only a thief but such a stupid thief.

Subra and the MIC can run for miles on one Milo tin and one chicken curry. No surprises there.

But I dont know how Liow Tiong Lai and the MCA can still stay in the cesspool. I say towkay, Cina tak tahu malukah?

Wahid was Minister in the PM's Department. No need to reshuffle. If Rahman Dahlan and Tokpa leave, there will be a reshuffle. It maybe mamak power again !!

That video showing a short dumpy woman boarding a private plane. You can see the bag carriers (about 17 of them) carrying 25 suitcases or more onto the plane.

It is a flight hazard to put suitcases in the passenger compartment. If there is turbulence the large bags may fly around inside the passenger area.  This is certainly in breach of safety regulations.

But why not just put the suitcases in the luggage compartent? What is so special or valuable that the more than 25 suitcases must go with the sole passenger (plus maybe a few more).

If there were other passengers surely their suitcases would have been loaded in the luggage storage of the plane.

Depositing large amounts of cash in Turkish banks may get the Turkish banks involved in money laundering. The Turks are not very clever either.

Diamonds can be kept in safety deposit boxes in a bank - no money laundering regulations involved. But you dont need suitcases to carry diamonds.

If the suitcases came back empty or did not come back then you know that the short dumpy woman is building a nest somewhere outside the country.

They are preparing their getaway nest.  The conclusion to this cartoon show is so predictable.

While on a Flight to Turkey it may be useful to read The Flight To Varennes.  But these people are not the reading kind. - syedsoutsidethebox