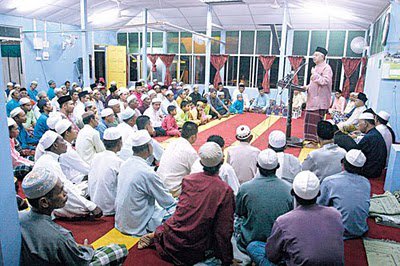 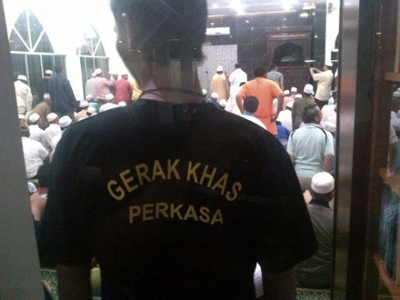 I saw a man with sickle at Kedah mosque fracas...

A PKR leader who was at the Alor Setar mosque which was stormed by Perkasa members last weekend said he saw a man carrying a kerambit (a small sickle).

According to PKR central leadership council member Abdul Rahman Yusof (left), the man was carrying it in the front pocket of this vest.

“I saw that he kept touching the kerambit.

“I feared that if there was a blackout, something terrible might happen, but luckily the emergency lights kicked in when the power went off,” he said.

Masjid al-Hussain in Seberang Pumpung was stormed by Perkasa members after the maghrib (dusk) prayers on Sept 2, as Perkasa was unhappy that PKR de facto leader Anwar Ibrahim was to give a religious talk (tazkirah) there.

Perkasa claimed that the action was to stop mosques from being abused for political reasons.
Responding to this, PKR central leadership council member Latheefa Koya, who was present at the event, said it was “ridiculous” to suggest any political abuse as Anwar gave a religious talk.

“The imam invited him to speak, it wasn’t political, and he had a political ceramah at another event after the tazkirah,” she said.

‘No right to act criminally’

PKR vice-president N Surendran, who was outside the mosque when it happened, added that even if it was political, Perkasa had no right to storm the area.

“Whether it is political or not is besides the point. Does it therefore entitle Perkasa to engage in criminal action, to hit people or to riot?” he asked.

“We want the police to throw this book (the Penal Code) at Perkasa.”

Both Surendran (left) and Latheefa said that the only reason the “dangerous” situation did not escalate was the restraint shown by the PKR supporters and congregration.

Surendran added that he witnessed organisers make repeated “desperate calls” to the police, but “four or five” officers only showed up an hour later, “and only stood there”.

Condemning the act today, PKR information chief Muhammad Nur Manuty said that Perkasa’s action was an act of “barbarism, perpetuated in the dark ages by those against justice, truth and freedom”.

“Even the Prophet Muhammad was hurled with rocks and pieces of wood when he was preaching to the people of Mecca,” he said.

Meanwhile, Perkasa denied allegations that PAS Pokok Sena MP Mahfuz Omar was almost hit by a shoe hurled by a Perkasa protester into the mosque.

The Kota Setar Perkasa chief also denied that anyone was physically hurt in the incident , and claimed that it was the mosque committee members who turned off the speakers, and not Perkasa members.

He was reported by Utusan Malaysia as saying that Perkasa members were protesting peacefully before one of them was allegedly choked by a personal aide of Anwar, which infuriated other members-malaysiakini 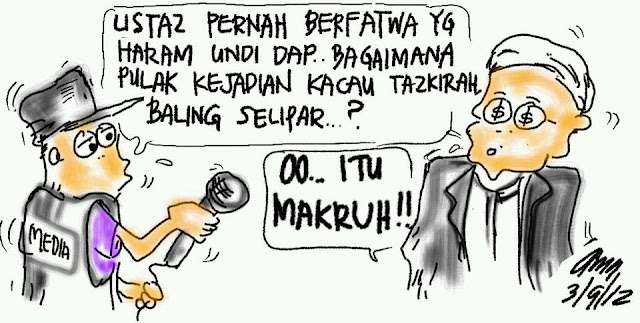