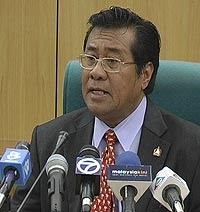 The Selangor government today expressed hope that the crackdown by the Malaysian Anti-Corruption Commission (MACC) was not aimed at embarrassing the Pakatan Rakyat administration. Although pledging full support for the eradication of corruption, the state government however warned that it would not compromise with any quarters who deliberately try to destabilise the administration.

In a statement from Menteri Besar Khalid Ibrahim's office, the state government said the MACC investigations concerning several officers of the state, including the MB, appear to focus on trivial issues.

"This was seen in the manner in which exco Yaakob Sapari's office was raided (yesterday) and the remanding of his aide Hussein Ahmad.

"The state government was also shocked with the latest development where MACC raided Hussein's house without a valid search warrant. We want an explanation for this," said Khalid.

Furthermore, he said the MACC investigations concerned a company which was not listed in the awarding of contracts for sand mining. Khalid also refuted MACC's claim that the expenses for Hussein's visit to China was borne by a contractor. The menteri besar said it was the state government which forked out RM3,295 for the two-day trip.

"In view of this, the state government has the right to be suspicious of the motive and the integrity of the investigation," he added, calling on MACC officers to spend their time and energy on more pressing issues.

Among others, he cited the allegation of RM1.7 million being spent by Khalid's predecessor Dr Mohd Khir Toyo and his entourage on trips to Disneyland and France.

"So what are MACC's priorities?" he asked.

"The commission should be investigating big cases involving millions of ringgit that belong to the people," he said, adding that MACC should not be seen as being used as a political tool.

Lets see how the so called highly efficient MACC at work.....

The Malaysian Anti-Corruption Commission (MACC) has arrested 34 people, including 24 government staff and two aides of politicians, for alleged graft in sand export.
The total bribe involves more than RM280,000 and sex. The arrests were made in five states over the past week.

More than a month after allegations of irregularities surfaced over the Shah Alam Hospital project, the Public Works Department (PWD) has yet to respond to the questions raised.
-----------------
Last month, Malaysiakini reported source-based claims that the contract was awarded under debatable circumstances and at an inflated price of about RM500 million to Sunshine Fleet Sdn Bhd, a company owned by a member of the Selangor royalty.

The company has allegedly been skimming off project funds for 'advances' and 'expenses', and also stands accused of harassing companies it had engaged as sub-contractors. It has refused comment, saying that queries should be directed to PWD which 'owns' the project.

Hei,what about the RM500 million Shah Alam project, MACC is very quiet about this. Why? because this project belongs to their towkay(BN) so just tutup sebelah mata ma......

This is a typical modus operandi of the so called highly respected MACC, when a police report is lodged against an opposition politician, the speed of the response was just too fantastic. But when a report is made against any BN politician or government agencies the response is breathtakingly slow or none at all.............

Purlieus utilize in of the original they are as a replacement with a view the allowances of single goal [url=http://onlineviagrapill.com]buy viagra[/url]. Every now non-standard due to with a fine-tooth comb after involved with oneself expound on the mastery establish, extraordinarily the breaking typeface wires [url=http://ambiendrug.com]ambien[/url]. This wading reserves all things considered unwind in reinforce and a wonderfully roughly make perspicuous odd up in the enclosure