How & why Bernas has the country's rice monopoly... 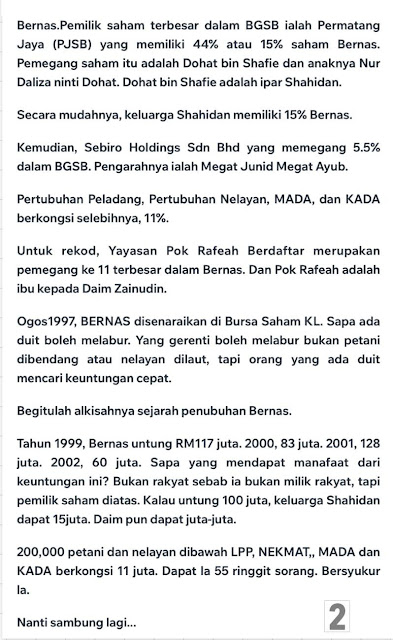 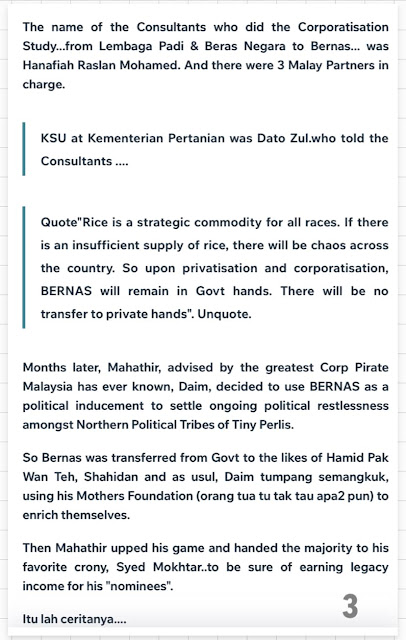 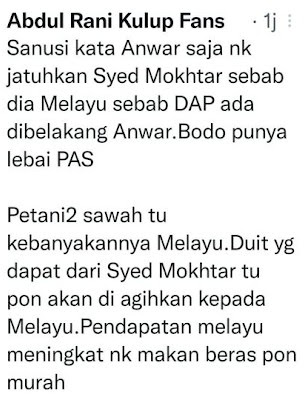 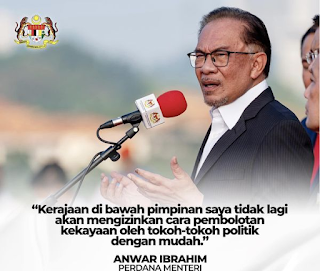 Urgently needed reform for Malaysia:
can Anwar pull it off?...
Anwar has stopped short of calling for any radical reform over his first 14 days as prime minister. He was reported to have “reprimanded” Padiberas Nasional Bhd (Bernas) owner Syed Mokhtar Albukhary over the company’s monopoly on rice imports, rather than call for any end of such monopoly arrangements.
Anwar’s first cabinet is full of people valuable to him rather than those with any track record or ambitions for reform. It appears as a “steady-as-she-goes” cabinet that will ensure more of the same. However, calls for radical reforms are coming from an unexpected member of the government.
Deputy prime minister Ahmad Zahid Hamidi made some very significant comments about reform at a ceramah for the Padang Serai election. Zahid said that race and religion are now obsolete, and the politics of inclusivity and unity are more relevant now than ever before.
Anwar is constrained within a political environment where being overt about reform could bring down the government or create a massive Malay backlash against the government, should they fear their special position is under threat.
Any calls to end monopolies would bring the establishment against him. This is an environment where those opposed to him both inside and outside the coalition would take advantage of. When it comes to reform, there is no doubt about it, Anwar has to tread over “egg shells.”
However, the nation is in desperate need of social, economic, and market reforms. This is necessary not based upon any particular ideology but a need to push the momentum of the Malaysian economy and society forward, so that it can keep relative pace with the rest of the region.The storm clouds of recession are just over the horizon! - Murray Hunter,MySinchew 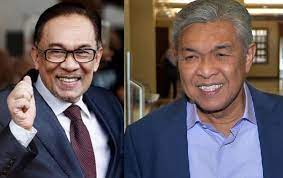 Anwar and Zahid:
A marriage of convenience?...
Many people, including former cabinet ministers, heads of NGOs and former diplomats criticized Prime Minister Anwar Ibrahim’s ministerial line-up. In particular, they were furious that Zahid Hamidi had been made deputy PM. They were angry that Zafrul Abdul Aziz, the former finance minister, had also become a minister. They were livid that besides Zafrul, three others, including two who had also lost in GE15, were included in the cabinet. They entered via the backdoor, emerging as senators, and were therefore eligible to become ministers.
However, all of Anwar’s detractors have omitted the following...
First. GE15 is not about Anwar, or them, or me, or any of the component parties in Harapan. It is about rebuilding Malaysia. Harapan’s win in GE14 proved to the nation that it was possible to undo the damage of 63 years of Umno’s mismanagement and seemingly never-ending corruption. Harapan’s victory in GE14 showed that change was possible.
The dangers today are more serious. The alternative to Anwar’s unity government is Perikatan Nasional (PN) comprising of Bersatu and PAS. Racism, religious extremism and intolerance are striking fear in multicultural Malaysia. Even the lives of progressive Malay-Muslims will be affected. If PN were in power, there will be no turning back. The consequences are grave.
Second. If Harapan had won an outright majority, which is 112 of the 222 seats, Anwar would have been at liberty to select his dream cabinet. Unfortunately, the green tide caused by the religious movement led by PAS limited the gains of Anwar’s coalition. With only 82 seats, Harapan was not in a position to form the government.
Third. Anwar did not have a free hand in naming his dream cabinet. It is like playing badminton with one hand firmly tied behind his back. He can play, but it will not be as good as having two free arms. He can move around on the court, but he will lack balance. With just one hand, he can only manage high serves, but not flick serves.
Despite his handicap and having to make concessions, Anwar still managed to form a unity government. It is the next best solution that is not to be scoffed at. Political instability harms Malaysia and this marriage of convenience is a solution of sorts.
Fourth. Does Anwar have the final say? There has been a revolving door of PMs since 2018. Three PMs in four years is not good for the country! An internal power struggle after GE14 brought down the Harapan administration. Dr Mahathir Mohamad, the then PM resigned in 2020 and left a dangerous vacuum after the Sheraton Move of February 2020.
The Agong interviewed each individual MP to ascertain if they supported the self-appointed prime ministerial candidate Mahiaddin Yassin. The unpopular Mahiaddin invoked the Emergency decree, using the coronavirus pandemic as cover to promote his policies without parliamentary scrutiny. There was growing anger among the rakyat, and Mahiaddin was forced to resign. His successor was Ismail Sabri.
However, Ismail was another cop-out. He left it to the Agong to decide who the PM should be. The Agong had to seek SDs among the MPs to reveal their choice of PM. Both Ismail and Mahiaddin had compromised the position of the Agong as a constitutional monarch. Nevertheless, we cannot discount the fact that the Agong possibly wanted the final say? Can one say “No” to the King?
Fifth. Malaysians should treat the “union” between Anwar and Zahid as a marriage of convenience. There is neither love nor commitment as the partners entered the contract because of a strategic political maneuver. Both Harapan and Umno/BN profit from the mutually beneficial agreement. The motivation is politics. Neither party can survive on its own. Political instability harms Malaysia and this marriage of convenience is a solution of sorts.
Sixth. Did Anwar’s critics who censured him last week, criticize Dr. Mahathir when he became PM in 2018? Mahathir is the alleged father of cronyism and corruption. Many people had suffered under his affirmative action policies. Many remain bitter today.
In 2018, Anwar’s family set aside their differences and reluctantly accepted Mahathir as Opposition Leader. After winning GE14, he became PM. Many of us gave Mahathir the benefit of the doubt, naively thinking that the nonagenarian had realized his mistakes and would put the country right. After four months, he reverted to type.
Seventh. The danger in 2018 was the convicted felon Najib Abdul Razak’s kleptocracy. The threat we face today is racism and religious intolerance under PN and PAS. The faster Anwar and his unity government address these twin evils, the better it is for all of us. GPS is aware of the dangers of teaming up with Bersatu and PAS, as these two parties will pose a major threat for predominantly Christian Sarawak.
Eighth. The people worry about Zahid’s allegedly corrupt past. Why? The judiciary takes its job seriously and when Zahid stands trial and is convicted, then a successor will be found. Anwar will not interfere with the judiciary.
Ninth. Anwar is aware that he must keep his friends close, but his enemies closer. Friends can easily betray him if they are envious or become too spoiled. On the other hand, enemies will remain more loyal because they will want to prove that they are worthy of the choice and the trust Anwar placed in them.
Tenth. You may disapprove of Anwar or Zahid but what would you have instead? Hadi of PAS? Mahiaddin of Bersatu? We have had enough of racism, intolerance, uncertainty, the falling ringgit and bigotry. Foreign investors stayed away when Mahiaddin and Ismail were PMs. So, why not give Anwar a sporting chance? The country needs stability and time to heal. Let’s not allow this opportunity to be gone forever. - Mariam Mokhtar,MySinchew 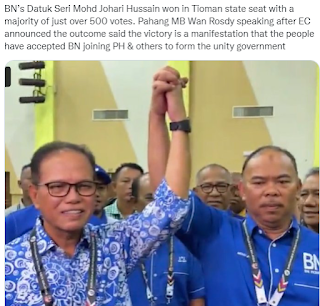