From Hadi’s ‘pillow mate’ to his worst enemy... It is an open secret that PAS has been constantly ‘harassing’ newly minted Prime Minister (PM) Datuk Seri Anwar Ibrahim with the appointment of UMNO president Datuk Seri Ahmad Zahid Hamidi as Deputy Prime Minister (DPM) being leveraged upon as an ammunition to pound the Pakatan Harapan (PH) chairman with a series of analogies.
In doing so, the Islamist party’s president Tan Sri Hadi Awang is seemingly elevating himself to the stature of a ‘perfect Arabian knight of some sort’ to justify to his supporters principles that made him turned down Anwar’s invitation for PAS to join the latter’s unity government. 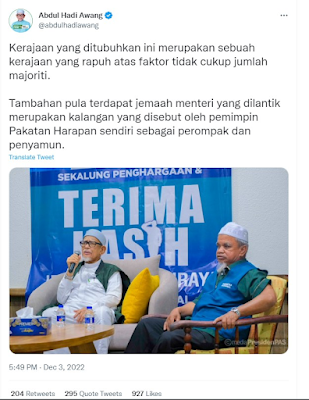 “The government that was established is a fragile government due to the fact that there is not enough of a majority,” he penned on Twitter yesterday (Dec 3) evening. “In addition, there is a group of ministers whom PH leaders themselves dubbed as robbers and bandits (supposedly referring to UMNO) … We be patient a while longer. This is the test from the God Almighty on us.”
With 49 seats and Hadi has nothing to show for it at Federal level. Has not been offered anything. Not even an office boy position in the PH Unity government thats almost done.That is why Hadi is fuming. Such is politics. One moment you are the nation's envoy with Ministerial status to the Middle East, and the next you lost an RM$80K a month job plus the perks, prestige, and spoils of public office that come with it says Hussein Abd.Hamid
The moral – or irony – of the story is that Hadi and PAS were once in a government where the penyamun and perompak supported the Cabinet of ex-PMs Tan Sri Muhyiddin Yassin and Datuk Seri Ismail Sabri Yaakob for more than two years (March 2020 till Oct 10). 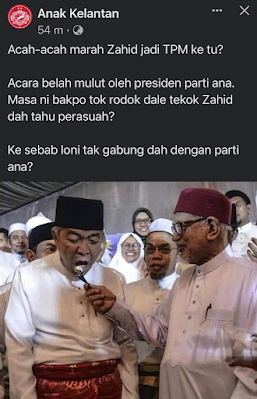 An unnamed political analyst has pointed to the “lightning speed” at which PAS “reverses its cards” against PH with Hadi now claiming that Anwar has appointed penyamun and perompak in his Cabinet now that PAS is in the opposition alongside Bersatu (the more bizarre is that PAS was once part of the 2018 PH coalition),
Following the Sheraton Move defection in March 2020 which saw the collapse of the PH government and PAS became part of the Barisan Nasional (BN)-Perikatan Nasional (PN) set-up, the analyst recalled that “it was fine” for Hadi and PAS “to be sitting, eating and drinking with the perompak”. 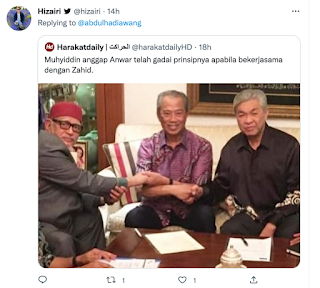 But when UMNO decided to join Anwar’s unity government – leaving PAS behind – it is finding it difficult to move on and started to portray the former as “being inhabited by crooks”.
However, the analyst contended that the problem does not lie with UMNO nor BN. “They (PAS) are not able to accept the fact that Anwar is the PM before any PAS member becomes one. They are a very ambitious lot,” the analyst who runs a think tank in Riau, Indonesia told FocusM.
Nonetheless, when the PN was in power, PAS supported both Zahid and the now-convicted and imprisoned ex-PM Datuk Seri Najib Razak. This adds to the absurd situation with netizens who don’t forget easily, trained their guns at Hadi and PAS for their roles in the previous two administrations with pictorial evidence - Focusmalaysia 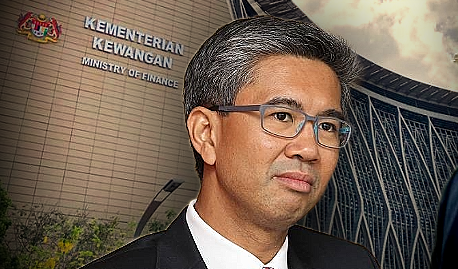 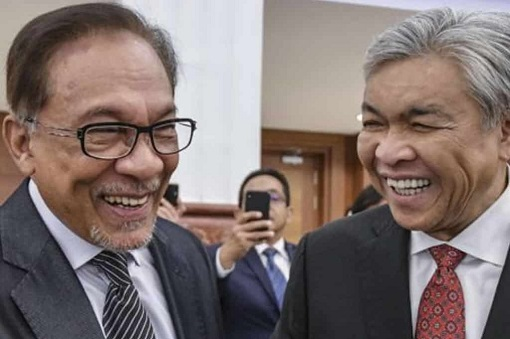 If Pakatan Harapan supporters cannot accept Zahid as Deputy PM, then they must be ready to accept the possibility that Zahid will be pressured to quit the unity government and support racist bigot Mahiaddin (Muhyiddin). Armchair critics conveniently forget that unlike the 2018 General Election, Pakatan Harapan did not win the 2022 General Election, therefore forcing them to share power.
Without kingmaker Barisan Nasional’s 30 MPs, neither Pakatan Harapan (82 MPs) nor Perikatan Nasional (73 MPs) can form a government. Angry Pakatan Harapan supporters should ask themselves why they didn’t win at least 112 MPs to form a new government on their own without having to give Deputy PM to Zahid, not to mention surrendering five additional ministries to Barisan Nasional.
Unlike 4 years ago, where PKR, DAP, Amanah and Bersatu (before Bersatu president Muhyiddin’s infamous “Sheraton Move” betrayal) shared the spoil of war among themselves, Pakatan Harapan’s 82 MPs translates to just 55% of the total 148 MPs participating in the unity government with two-thirds majority. They now need to share the cake with more strange bedfellows.
Not only Zahid was appointed Deputy PM, he was also appointed Rural and Regional Development Minister. It was specifically designed in such way to help UMNO wins back rural Malay voters, who had swung to Perikatan Nasional in droves. People who don’t understand this simple strategic move should go read the Romance of Three Kingdoms. Anwar needs to re-balance the power.
Anwar, and Pakatan Harapan for that matter, is lucky that UMNO still commands about 30% of the Malay vote bank. It would be game-over if Perikatan Nasional, successfully enticed 50% of Malay voters with racist bigotry, manages to swallow UMNO’s entire machinery and grassroots. Bersatu, formed to kill UMNO, is halfway in a reverse takeover of the Malay nationalist party.
Once Bersatu takes over UMNO, it will become a new UMNO with 100% dominance over Malay community – only 100 times more corrupt, radical, parasitic, extremist and racist. This is not an exaggeration. Already, the Terengganu government, having fallen into the hands of Perikatan Nasional, has outlawed unisex hair salons or barbershops – whether operated by Muslims or non-Muslims. 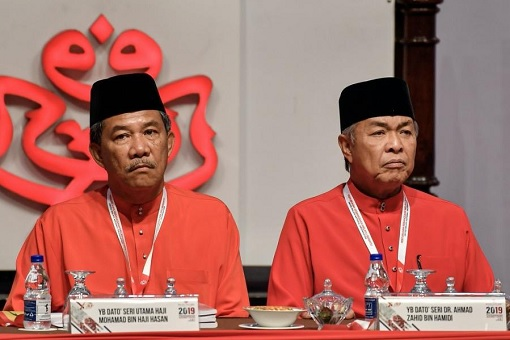 Non-Muslims who whine, moan and bitch about Zahid as deputy prime minister should instead imagine this scenario – Hadi orders a total ban on lion dance, Chinese and Indian festivals including Christmas celebration, beer and alcoholic beverages, pork, entertainment centres like cinemas, short skirts, and even outlaw Chinese names or demands 70% ownership in all Chinese businesses.
Sure, Zahid is a bad guy because he is still facing 47 corruption charges. Do you really think the leaders of Sarawak-based GPS are clean and innocent? Even Sarawak Premier Abang Johari is just a proxy of Abdul Taib Mahmud, the most corrupt former Sarawak Chief Minister (1981-2014) who is now the “untouchable” Godfather in his capacity as the Governor.
Besides, Zahid’s new position isn’t prestige at all because the office of deputy prime minister is not provided for in the Constitution of Malaysia. It’s nice to have, but not necessary. However, in the case of UMNO, it is absolutely necessary to give the party president the position to prevent mutiny against Zahid, who has so far shown incredible support for Anwar.
UMNO deputy president “Tok Mat” Mohamad Hasan cannot be appointed as Deputy PM due to his dubious support for Pakatan Harapan. Compared with Zahid, he lacks grassroots support. Tok Mat could easily switch sides to Perikatan Nasional as he likes to play safe when comes to tough decision. He is appointed defence minister to satisfy UMNO-Malay file and rank.
More importantly, Gabungan Parti Sarawak (GPS) obediently follows UMNO direction, even after the Malay nationalist party suffers its worst defeat in history. So, “Gangster Zahid” does not only directly controls 30 UMNO MPs, but indirectly controls 23 GPS MPs. Like it or not, without Zahid in charge of Barisan Nasional, it would be a challenge for Anwar to even negotiate with GPS.
People who hypocritically condemned Anwar for appointing Zahid could not explain why 50% Malays had voted Perikatan Nasional anyway, even though crooks like Najib’s stepson Riza Aziz, Musa Aman, Ahmad Maslan, Abdul Latiff (brother of Abdul Azeez Abdul Rahim) and Tengku Adnan were freed by the backdoor Prime Minister Muhyiddin Yassin.
Muhyiddin Yassin and Zahid Hamidi 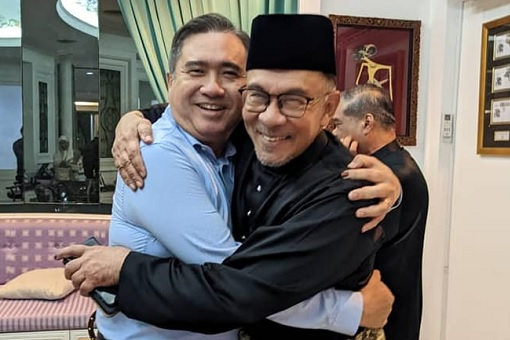 And was it not during Sabri administration, of which Perikatan Nasional was part of, that saw the acquittal of Zahid’s 40 corruption charges? How do you know that the Attorney General’s Chambers appointed by Muhyiddin would not also free Zahid of his remaining 47 charges? So, it’s acceptable for Mahiaddin to free crooks, but unacceptable for Anwar appoint a suspected crook?
The question should be asked why the backdoor administrations of Muhyiddin and Sabri failed to send Zahid to jail during its 33-month rule. Just because Zahid is made deputy PM, it does not mean he will escape prison under Anwar administration. If the judiciary system finds him guilty, it would be hard to keep him. For now, the UMNO president is innocent until proven guilty.
Still, is it fair that the Democratic Action Party (DAP) was given only 4 ministerial positions, although the party won a whopping 40 parliamentary seats? Why Anwar’s PKR party gets the lion’s share – 8 ministries despite winning only 31 seats? How to justify 6 ministries for UMNO who won 30 seats? Even GPS with only 23 seats gets a staggering 5 ministers.
The answer can be found from DAP’s secretary-general Anthony Loke’s statement – willingness to “sacrifice everything” to help Anwar succeeds as 10th Prime Minister. Meaning, even if the party gets zero ministry, it would still support the Pakatan Harapan leader unconditionally just to stop racist bigots like Muhyiddin and Hadi from destroying the country.
Pakatan Harapan’s 22-month rule after the 2018 General Election has shown that everyone would lose if DAP insists on getting finance minister or other sensitive ministers at a time when extremists Bersatu and PAS actively stir up racial and religion sentiments among the Malays that the Malay-Muslims have lost power to the “Chinese, Christians and Communists”.
Did anyone notice how the disappointed Hadi Awang suddenly lost all the ammunition to attack Anwar administration as a Chinese-dominated government after the cabinet was unveiled? Even the once despicable Zahid has showered praises on DAP for prioritizing national imterests more than party or individual interests, telling Muhyiddin to learn from DAP.
Surprisingly, Lokman Adam, Najib’s loudest cheerleader and one of UMNO’s biggest racist, has been actively promoting Chinese-majority DAP to the Malay audience on social media. What DAP fails to convince the Malays in over 60 years could be easily explained by the same UMNO leaders who are the specialist in the game. In fact, Lokman has suggested the Barisan Nasional and Pakatan Harapan alliance could continue beyond the next 5 years. - FT
DAP’s sacrifice...
DAP’s secretary-general Anthony Loke Siew Fook might not find himself in the good books of staunch DAP members/supporters for his over-compromising stance in terms of Prime Minister (PM) Datuk Seri Anwar Ibrahim’s Cabinet composition but he has surely won the heart of Twitter user Ainur Rabiatuadawiyah.
She joined many young pro-Pakatan Harapan (PH) netizens who have come out to express support for Anwar’s unity government but was specifically touched to the core by the Seremban MP’s gesture of “willing to sacrifice everything to help Anwar Ibrahim succeed as Malaysia’s 10th PM.

In a media conference yesterday (Dec 3), Loke reiterated that DAP has rendered undivided support to PH chairman Anwar Ibrahim to become PM unconditionally and without setting any expectation in terms of number of Cabinet positions.
He added that DAP was even willing to sacrifice itself if it were to pose a “stumbling block” to the formation of an Anwar-led government.
So full of respect for Loke that Ainur Rabiatuadawiyah went on to defend her teary emotion when another netizen teased her that while Loke was among the performing ministers in the previous PH government, she need not be overwhelmed by emotions.
“Why are you bitter? He said in the DAP media conference earlier that DAP will support Anwar unconditionally, ie they are OK to get only four ministerial posts despite having 40 MPs. Then he said what I tweeted and much more.” 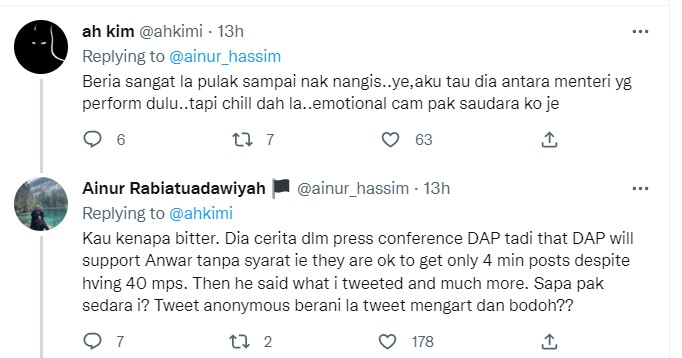 Loke also ranked highly in the list of Pemikir Malaysia’s list of PH heroes who have helped Anwar save Malaysia from extremists. 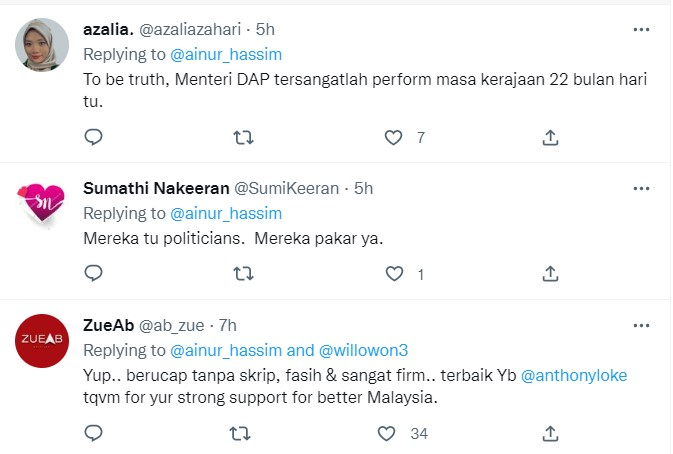 JOKER also has full of praises for Loke who has made the electorate in his Seremban parliamentary constituency proud. - focusmalaysia 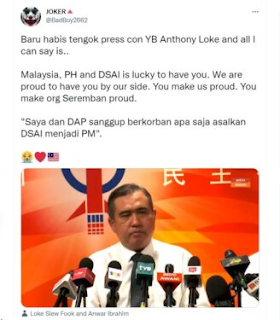 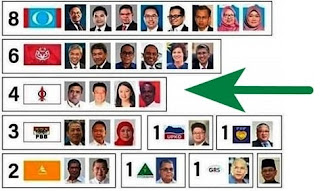