Police have failed to obtain a remand for former Bar Council president Ambiga Sreenevasan arrested during the anti-GST protest yesterday, but the 29 youths detained were not as fortunate.

"The 29 were arrested for releasing an orange smoke flare (at the protest), as if it is a heavy offence," Yesudas said in a Twitter posting.

Upon her release, Ambiga appealed to the public not to forget the 29 who will be behind bars for up to three more days, calling their remand "ridiculous".

"They got into the station handcuffed and chained.

"I am very concerned. They are the youths of this country and we owe it to them to find out why they are treated the way they are.

"We owe it to them to ensure that they are not treated like criminals even before a case is made against them," she said.

The 29 youths had their remand hearing at the Dang Wangi district police headquarters while the remand application for the protest leaders was done at the Jinjang police detention centre.

The multiple arrests following the peaceful May Day rally yesterday in Kuala Lumpur have sparked an outcry from civil society, calling it an abuse of police powers.

The arrests appear unabated as activist Hishammuddin Rais (left) was arrested shortly after the four were released at Jinjang police detention centre.

"I was arrested at home at 2.30pm. I am now being brought to Dang Wang district police headquarters.

"Seven police officers came to my house... I am accused of illegal assembly under Section 143 (of the Penal Code)," he said in a series of messages.

PKR vice-president Rafizi Ramli was also arrested this morning after surrendering himself at the Kuala Lumpur police headquarters.

Police have also summoned PKR vice-president Tian Chua, but has yet to arrest him.

"I told them that I was already on my way to Permatang Pauh; they have not contacted me again," he told Malaysiakini

PKR vice-president Rafizi Ramli was arrested today after presenting himself at the Kuala Lumpur police headquarters after being summoned by the police.

He was held under Section 143 of the Penal Code for being a member of an unlawful assembly, according to Rafizi's Facebook posting.

Meanwhile, the police have unsuccessfully sought to detain former Bar Council chairperson Ambiga Sreenevasan longer than the 24 hours they are allowed by law to hold her.

The trio were arrested last night for their involvement in yesterday's anti-GST protest.

A team of lawyers entered the detention centre around 11.10am for the hearing while Ambiga arrived in a police van at about 11.50am.

She appeared in good spirits, smiling and waving at the media as the vehicle entered the detention centre.

Also spotted in the vehicle is PAS central committee member Hatta Ramli who surrendered earlier today, on police request. He, too, was released later.

Meanwhile, some 40 supporters have gathered outside the Jinjang detention to show support and cheered when Ambiga and Hatta arrived.

Speaking to journalists outside the detention centre later, PSM treasurer A Sivarajan said the anti-GST protest yesterday was peaceful.

He said a smoke bomb going off at the rally was an isolated incident and should not be used as an excuse to crack down on the organisers.

"The protest was peaceful, with more than 10,000 people. None of the people got hurt and none made any police reports.

"This sporadic event (smoke bomb) is anyone's guess. If police said so, then catch that person... for us, it was very peaceful and we finished, we dispersed," he said.- mk

Ambiga told Malaysiakini that a police officer had informed her lawyer about this.

"I will be going to the Dang Wangi police headquarters. The police told my lawyer that I will be arrested and held overnight.

"I am shocked by this. It was a peaceful rally," she said.

The gathering in Kuala Lumpur, which brought together 20,000 people to march from various points to Dataran Merdeka and then to KLCC in protest of the consumption tax, had dispersed at 5.30pm.

Ambiga was also the former co-chairperson of Bersih, a movement which held mammoth street rallies in the past to press for electoral reforms. She is currently the patron of NGO Negaraku.

"(Ambiga will be) investigated under Section 143 (for unlawful assembly). She's not even one of the organisers," Latheefa told reporters.

Ambiga herself did not know what information police wanted from her.

"I just said a few words in the beginning (of the protest)," she said.

Meanwhile Arutchevelan, who arrived at 10.50pm, said police had initially told him all was well.

"After the protest, I called the Dang Wangi public order chief, and he said everything went well.

"So I'm amazed they made arrests," he told reporters.

He said May Day is celebrated worldwide and therefore to crack down on the rally was uncalled for.

"I'm not sure (if they will detain me overnight),  but I am prepared," he added.

Loke said he was halfway to Seremban when he was called to Dang Wangi.

"They said they cam arrange a police transport from Seremban if I don't come.

He too does not know if he would be arrested.- mk

PKR has been offering grilled lobsters whereas BN is going around the Permatang Pauh constituency with a Xiaomi - a China-made mobile phone - to woo voters.

These are not vote-buying schemes in the by-election, but campaign strategies by the two arch rivals.

Azman and Salleh, however, have been silent about their respective campaigns.

The week kicked off with several 'stunts' by Wan Azizah, including a press conference in Kubang Semang where she cried 'victim' while waving a mobile prepaid card.

"I am a victim of GST. I have to pay an extra six percent just to reload my phone," she said.

Later in the afternoon, Azmin Ali (right in photo below) donned a blue apron as well as a white cap and grilled lobsters for the residents on Jalan Kg Baru.

And as the smell of freshly grilled lobsters wafted through the air, the Selangor menteri besar said, "These lobsters are GST-free".

"This is not what you eat daily but they are not GST-ed, like your baby’s milk or pampers, your maggi mee or sardines," he added.

Lobsters are classified as basic food under the 'crustaceans' category, which has zero GST.

On Wednesday, Azizah went shopping at a local mini-market in Kubang Semang. After paying the bill, she exclaimed, "I know exactly how housewives feel".

"They are the ones who feel the burden as they purchase these items everyday," she said, cradling a basket of groceries.

Yesterday, she also launched the "Don’t tax my children" campaign, which is bound to resonate well with ordinary folk, who already feel the pinch of rising cost of living.

'Say No to GST' is Pakatan's battle song, a brilliant one, as the party rides on public discontent against the new tax since it was implemented on April 1.

In contrast, BN's style of campaigning seems like a tame affair. Its battle cry: "Enough, this is our turn" sounds like DAP's 'ubah' campaign, and might confuse voters.

From the onset, the coalition has little to play with except to wave the development card.

Race or religious issues - which were often played up in previous by-elections - took a backseat this time.

Suhaimi can only boast of his impressive entourage, which includes the likes of top BN leaders such as Deputy Prime Minister Muhyiddin Yassin and Home Minister Ahmad Zahid Hamidi.

But there is nothing explosive or exciting about his campaign.

BN is banking on his pleasant demeanour, for just as Wan Azizah, 63, is motherly, the 44-year old Suhaimi is brotherly.

Posters of Suhaimi show him sporting a simple T-shirt, just like the typical kampung boy.

During his walks, he shakes hands with everyone, even children, and is always similing.

To the Malays, Suhaimi describes himself affectionately as "Abang Mie", to the Chinese, he calls himself "Xiaomi".

By calling himself Xiaomi, Suhaimi gives the impression that voters can have easy access to him.

However, it definitely takes more than charm to be a parliamentarian.

Suhaimi has been dodging questions on the GST, preferring to promptly exit the scene, albeit politely, when reporters pose the question.

He has also declined an invitation by human rights NGO Suaram to debate with Wan Azizah on the GST issue.

It seems that he prefers to take subtle swipes at Wan Azizah.

He pledges to stay put in Permatang Pauh, hinting that unlike the PKR president, he does not need to juggle between two constituencies.

Wan Azizah, however, has retaliated, saying that she has two heavyweights on her side.

In Kajang - where she is the assemblyperson - Azmin, her deputy chief, is the Selangor menteri besar. In Penang, her closest ally is Chief Minister Lim Guan Eng.

Both have promised to look after her seats if she wins Permatang Pauh again for the fourth time.

It remains to be seen if these political gimmicks would translate into votes.

Reporters are waiting with bated breath for something exciting to happen, but the ‘shocker’ which the home minister promised earlier, has yet to come.

Permatang Pauh goes to vote on May 7, with early voting on May 3.-mk 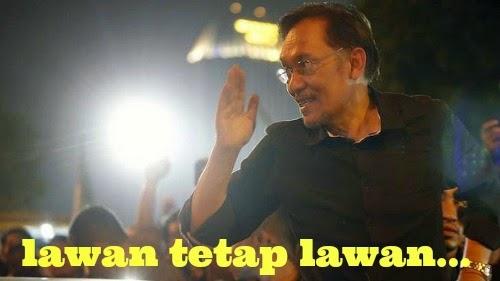