Why make crash finding only after 12 days...

The timing of Prime Minister Najib Abdul Razak's announcement that MH370 fell into the Indian Ocean last night became a point of contention at the press briefing by Malaysian authorities today.
A reporter from China had questioned why Malaysia had made such a conclusion only last night although satellite data cited was available since March 12.
To this, the investigation team said there was no intended delay and that time was needed for further corroboration and analysis.
Acting Transport Minister Hishammuddin Hussein said that satellite data alone is not conclusive as shown when the search was concentrated in the South China Sea.
"We received satellite data from China sighting (debris) in the South China Sea (and) redirected our search in areas we had already searched, and it was negative," he said, to illustrate his point.
Department of Civil Aviation director-general Azharuddin Abdul Rahman added the satellite data received on March 12 needed to be analysed as on its own, it was only a series of "handshakes" between the plane equipment and the satellite.
"As a result of the analysis by the United States team, together with Federal Aviation Administration, (the team) came up with the two corridors and this was announced in Mar 15.
"It took that long because it needed a lot of work to analyse the sixth handshake. Yesterday, there was refinement of the information on the sixth handshake and this is to be refined again," he said.

Remote chance of survival
The satellite in question is owned by Inmarsat, a British satellite telecommunications company. The satellite is geostationary and sits above the Indian Ocean.

To another question, MAS CEO Ahmad Jauhari Yahya said that given the available evidence, it is highly unlikely to find any survivors.

"The plane would have very little fuel by then and there are no land mass nearby. I suppose we can conclude it must have went down in the water.

"That is a very remote area. We are talking about (spending) 18 days (in the water)... For anyone to survive that long is extremely, extremely remote," he said.

However, Hishammuddin assured that search and rescue efforts are still underway.

"God willing, we will save (them) if they still can be saved," he said.- mk

Since Malaysia Airlines Flight MH370 vanished after mysteriously cutting communications with air traffic controllers, the aircraft's automated ping to Inmarsat's satellite has been the only clue to its final whereabouts.
Building on that data, authorities today revealed the aircraft finally "logged off" from the satellite network by 9.15am and the timing was consistent with the aircraft's fuel limit.
"No response was received from the aircraft at 0115 UTC (9.15am Malaysian time), when the ground earth station sent the next log on/log off message. This indicates that the aircraft was no longer logged on the network.
"Therefore, sometime between 0011 UTC (8.11am) and 0115 UTC (9.15am), the aircraft was no longer able to communicate with the ground station.
"This is consistent with the maximum endurance of the aircraft," acting Transport Minister Hishammuddin Hussein told a press briefing in Kuala Lumpur this evening.
To date, Malaysian authorities have not once uttered the word "crash" despite already indicating all passengers had likely perished after the plane went down in the Indian Ocean.
However, Hishammuddin's assertion that Inmarsat's satellite losing connection with MH370 by 9.15am gives an indication of the time frame the aircraft may have crashed.
It gives investigators an idea of MH370's final resting area as the aircraft could have still flown on between the last complete satellite handshake at 8.11am and 9.15am, when the connection was lost.

"I must emphasise that this is not the final position of the aircraft," he said in reference to the 8.11am handshake.

Hishammuddin further revealed investigators have observed a seventh and partial handshake that was sent out at 8.19am from the aircraft.
"At this time this transmission is not understood and is subject to further ongoing work," he said.
This was on top of the previously reported six complete handshakes that were sent out with the last one being at 8.11am after the Aircraft Communications Addressing and Reporting System (Acars) was turned off.
These pings were also the basis of analysis that finally concluded that plane ended up in the southern Indian Ocean.
Responding to scepticism over investigators' confidence, Hishammuddin said Inmarsat and the Air Accidents Investigation Branch (AAIB) had measured the "Doppler effect" experienced by the pings which is also known as Burst Frequency Offset.
'Good correlation with southern corridor'
This measured Doppler effect was then plotted along side what the predicted Doppler effect would be if the plane had flown in the northern or southern corridor.
"The analysis showed poor correlation with the northern corridor, but good with the southern correlation corridor...
"In order to establish confidence in its theory, Inmarsat checked its predictions using information obtained from six other Boeing 777 aircraft flying on the same day in various directions. There was good agreement," he said.
The ping is sent out in a form of wave. The top point of every wave, like water ripples, spreads out uniformly.
However, when the wave is emitted from a moving object, then the speed of every wave points will vary, depending on a number of factors, including the object's own velocity relative to the receiver.
The easiest way to observe the Doppler effect is in how the sound of the siren on board a moving police car appears to change as it passes an observer.
In this case, Hishammuddin said, the Burst Frequency offset changed depending on location of the aircraft on an arch of possible positions and the measured Doppler effect indicated in was in the southern Indian Ocean. - mk

No one, and I mean NO ONE without any assistance on-ground can take control of a modern jet and make it disappear.

NO ONE can just board a plane, and hijack it without any distress signal.

NO ONE can subdue 2 pilots, 10 flight crew and 227 passengers without having arms on board (or have tampered with the planes systems while the plane was still on the ground in dock) to take control of a plane while in flight.

NO ONE who is not trained and an expert can disable all of a plane's communication systems while in flight.

NO ONE without the flight training and expertise can fly a meticulously planned flight route that evades national and military radar with all communications disabled.

NO ONE can simply make a plane disappear in complete silence.

And, there is NO REASON to crash a plane into one of the most remote parts of the Indian Ocean unless SOMEONE WANTED #MH370 to just disappear and to make SAR so impossible that the reason for the disappearance remains as #MysteryMH370 - f/bk 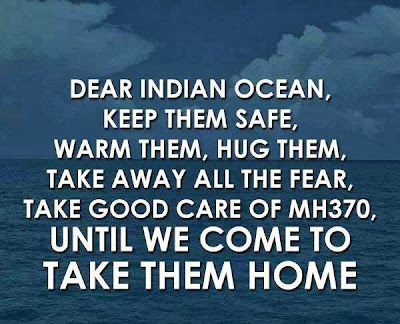 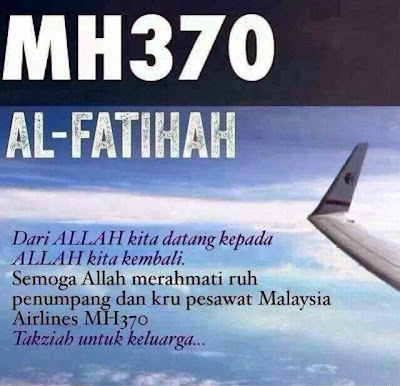