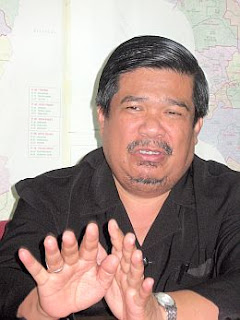 PAS central committee member Mohamad Sabu said should the voting pattern in Hulu Selangor continue into the next general election, the Barisan Nasional can forget all hopes of wresting back Selangor from Pakatan Rakyat.

"This also means Penang will be remain under PR, Perak will throw out the BN state government and Negeri Sembilan could also follow suit," said Mohamad Sabu.

He said the PR would be able to win more state seats in Selangor although it could lose some of them to BN.

The recent Hulu Selangor by-election saw the BN wresting back the parliamentary seat from PKR which won in 2008 with a wafer thin majority of 198.

"UMNO leaders have succeeded in convincing the majority Malay voters that BN is Malay and vice versa. That was why they voted for BN," he added.

As such, he said PAS faced a huge challenge to explain to the people that UMNO and BN had been in fact traitors to the Malays since independence in 1957, and made use of narrow racism for their own interests.

He said this was because PAS was a majority-Malay party and it carried a burden to "free the Malay mind from such deviant thoughts which placed the interest of Islam and Malays on UMNO."

"We should leave our fate to God, not UMNO. It is unfortunate that a section of Malay political leaders tie their destiny to UMNO, ostensibly to defend Malay and Muslim interest," he said.

He reminded that if the PR leadership continued to administer the state governments to ensure they were corruption-free, not given to extravagance, live in moderation and were prudent in financial management so that money could flow back to the people, the current support for PR can be sustained.