Najib and Zahid May Be Plotting How
To Strip And Plunder UMNO Assets...

When Mahathir Mohamad openly invited all Malay parties, including the UMNO, to join his party PPBM (Bersatu) under the pretext of Malay unity, it raises eyebrows. To the people who had shed sweat, tears and probably even blood bringing down the corrupt and toxic UMNO last May General Election, the prime minister’s invitation was seen as a betrayal of the highest degree.

For a while, Ahmad Zahid Hamidi, the UMNO president who suddenly made an unexpected but shameless comeback from his so-called garden leaves, thought that Mahathir’s invitation was like a gift from the God. Could it mean his prayers have been answered and his record 87 corruption charges would be dropped and he gets to walk away scot free if he joins the old man’s party?

Zahid probably had slapped his face a couple of times in disbelief over the offer. Even his colleague, Khairy Jamaluddin, son-in-law of former PM Abdullah Badawi, has advised his party UMNO to give a serious thought to the invitation to join hands with rival Bersatu. Khairy too believed the offer was too good to be ignored. Clearly, life as an opposition is too tough after ruling the country for 61 years.

The next warlord who was equally excited to the extent he almost orgasm at the proposal was Hishammuddin Hussein, the cousin of former PM Najib Razak. He too said UMNO’s top leaders should not dismiss any chance of a new political cooperation if it can unite their race, even though his reason to join Mahathir is to gain immunity from prosecution over past corruptions.

But Zahid Hamidi figured he had to play hard to get. After all, his party has 37 MPs, more than Mahathir’s party which possesses only 26 MPs. It probably crossed Zahid’s mind that he might not be accepted. But if Mahathir wants to acquire UMNO, it has to be sold as a complete package. Hence, the UMNO president rejected the prime minister’s invitation.

The 93-year-old Mahathir later made an incredible clarification. His invitation apparently was for “members” of other Malay-based parties – not the Malay parties. So, Zahid’s illusion, and Najib’s for that matter, that the ruling Pakatan Harapan (PH) coalition would be enlarged to accept UMNO as a new component for the sake of Malay unity was crushed.

To be fair, everyone had the perception that Mahathir’s offer was for Malay parties, including UMNO Malay nationalist party and PAS Islamist party, to join the ruling Pakatan Harapan coalition. Perhaps the premier was a bit senile. But it’s also absolutely possible that the old fox was testing the water, having fun watching crook like Zahid Hamidi squirming and begging to be invited.

Essentially, Mahathir’s clarification that UMNO as a party cannot join Pakatan closes the door for big time crooks like Najib Razak, Zahid Hamidi, Tengku Adnan and Abdul Azeez Abdul Rahim, just to name a few, from any immunity deal. The line has been drawn. Those crooks can never be forgiven as long as Mahathir sits on the throne.

Two days ago (July 9), out of the blue, ex-PM Najib was appointed chairman of Barisan Nasional (BN) advisory board, whatever that means. His appointment was unanimously agreed upon by the BN Supreme Council. The funny thing about welcoming the crook back to BN is that there was previously no advisory board. The post was created specially for Najib.

Exactly what can Najib advise the BN now when the same coalition was defeated under the leadership of the same man in the May 9th General Election last year? If he is such a gem, he should not have had stepped down as UMNO president after BN’s defeat in the 14th General Election. It’s an educated guess that both Najib and Zahid had planned to make the comeback together.

Khairy, probably the smartest man left in UMNO, said he was not happy with the return of his former boss Najib. He had earlier expressed his displeasure at the comeback of Zahid too. Hishammuddin has opted to play safe, offering neither support nor objection to the return of his cousin. Surprisingly, the biggest critic came from Nazri Aziz, once the biggest supporter of Najib in his 1MDB scandal.

Nazri said – “Who did we lose under (in the last general election)? What kind of advice can he give us? I think it is regressive.” Does the appointment of Najib as UMNO adviser prove that neither the leaderships of acting president Mohamed Hasan nor president Zahid Hamidi were effective, despite the trumpeted propaganda that UMNO and PAS alliance will crush the current government?

On the surface, Najib’s comeback looks positive. Like a white knight in shining armour, he could inject his fund – “Malu Apa Bossku (Why The Shame, Boss) moniker” – into UMNO and rejuvenate the almost bankrupt corrupt party. But if even his cheerleader Nazri could smell a rat with the return of his former boss, the crooked Najib is definitely up to something not good.

The last time Najib modified the constitution of SRC International Sdn. Bhd., a subsidiary of 1MDB, at an extraordinary general meeting (EGM) to make him the “adviser emeritus” of the company, he controlled the company and ordered retirement fund KWAP to loan RM4 billion to SRC, a company known as “Najib’s company”.

Yes, Najib’s express appointment as the adviser to UMNO, a non-existent position previously, has very little to do with strengthening the party. It was actually a humiliation to UMNO Council of Advisors chairman Tengku Razaleigh Hamzah, who was surprised at Najib’s appointment. Effectively, Najib’s new role as an adviser will make Razaleigh’s role redundant and obsolete.

It’s both entertaining and amusing that the foolish Razaleigh has thrown his support behind Najib, not realising that the crook has come back to plunder the party’s coffers. Coincidentally, all the crooks – Najib Razak, Zahid Hamidi and Tengku Adnan – are part of the roundtable plotting how to strip UMNO assets as the party faces the prospect of de-registration.

It was reported that UMNO once has assets totalling RM100 billion under proxies, trustees and nominees. UMNO president and its treasurer, who happens to be Zahid Hamidi and Tengku Adnan respectively, are a handful of leaders currently possessed the information of all the asset holders. However, the dumb Zahid probably was clueless as to how to recover the assets.

That explains the real reason as to why Zahid suddenly made a comeback from his garden leave, and the sudden appointment of Najib as BN adviser. Obviously, Najib cannot be made the UMNO Council of Advisors chairman since Razaleigh occupies the position. If there’s one man who can plunder and steal UMNO’s remaining assets, that man has to be Najib Razak.

Mr Treasurer Tengku Adnan was tasked with tracking down UMNO’s cash and property since last October. By now, he should have a list of assets belonging to the party. Sure, over the time, not all of the RM100 billion can be recovered. But there should be billions worth of assets left. Recently, UMNO sold its 123 million shares in Media Prima Bhd for RM73.81 million.

UMNO secretary-general Annuar Musa has announced that the party will sell more assets to boost its finance and cash-flow. UMNO members should start tracking where that money is being parked. Facing the likelihood of being declared illegal, Najib’s wide experience in money laundering is definitely useful in advising how to transfer cash out of UMNO to unknown entities.

To fight the present government, UMNO and BN need truckloads of money to mobilize its supporters. Selling assets for cash is one thing. Siphoning them for the rainy day is another thing. The very fact that Najib’s appointment was done with such secrecy, so much so that even Razaleigh was kept in the dark, speaks volumes that the crook’s mission isn’t just to blow his horn about “Bossku”. - FT 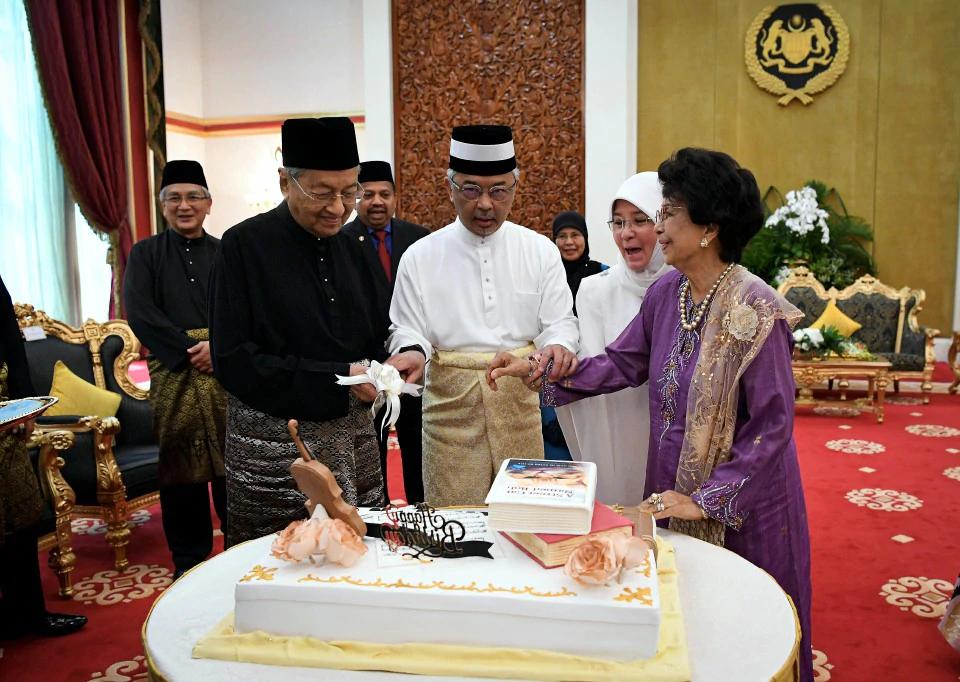