Is IGP Musa Hassan a law graduate from the UK...... 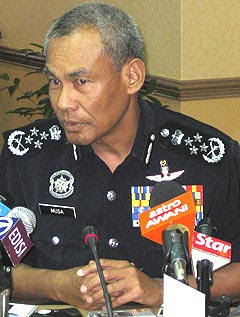 A police report has been lodged against Inspector-General of Police Musa Hassan for giving false testimony about his educational qualifications during Anwar Ibrahim's corruption trial in 1998. According to the report lodged today at the Damasara police station in Kuala Lumpur by Anwar's lawyer R Sivarasa, Musa, the investigating officer for Anwar's case then, had allegedly told the court that he had a law degree.

However, in 2009, Sivarasa said that during the corruption trial of former Commercial Crimes Investigation Department chief Ramli Yusuff, Musa had told the court that he, in fact, held a 'diploma in law and management studies'.

"The IGP had given a false statement during cross-examination in Anwar's case by stating that he holds a law degree while in reality he only has a diploma in law," said Sivarasa, who is also PKR vice-president and MP for Subang.

"I believe the motive behind Musa's statement was to increase his credibility during Anwar's trial," he added

Sivarasa also revealed that Ramli Yusuff 's case was dismissed last year by Justice Supang Lian on the grounds that the evidence provided by the 75th witness, Musa Hassan, was 'unreliable and to be disregarded'. Sivarasa said the inspector-general of the police should be charged under the Section 193 of the Penal Code for lying to the court.

The lawyer further alleged that Musa had also lied in an interview conducted by the The Star newspaper in 2006. The article had then referred to Musa as 'a law graduate from the UK'.

"I hope the police will carry out a fair investigation on this matter without fear or favour," said Sivarasa.