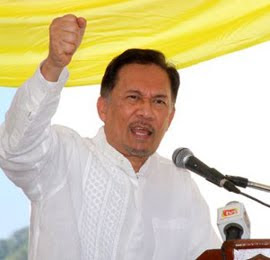 I met Anwar Ibrahim, the leader of the Malaysian opposition, in the ornate surroundings of the Landmark Hotel in London last week. He was remarkably relaxed for a man who is due to be put on trial, on charges of sodomy next week, which is a crime in Malaysia punishable with a long jail term.

If convicted, this would be a return to a prison cell for Anwar. He was arrested in the late 1990s and served six years in solitary confinement on previous charges of sodomy (later over-turned) and corruption.

Yet for a man about to undergo a humiliating and dangerous ordeal, Anwar seemed in remarkably good form: relaxed, cracking jokes and outwardly convinced that he would beat the rap. I asked him how he could be so laid-back, given the trial that he was about to face. He replied coolly: “It’s not that I’m oblivious to it, or unaffected by it, but you have to just get on with life.” He knows that he can survive prison and he has the support of a staunch and politically-engaged wife and six daughters.

I first met Anwar in 1992, when he was Malaysian finance minister. At the time, the going was good, both for Anwar and for Malaysia. The country was booming and the young finance minister was widely regarded as the favoured protégé and heir apparent of Mahathir Mohamad, Malaysia’s long-serving and autocratic prime minister.

Since then, Anwar’s life and career have taken many unexpected turns. In 1998 he fell out with Mahathir, after launching an attack on corruption in Malaysia. He was hit with the criminal charges that landed him in prison.

But Anwar has proved remarkably resilient. He has served time in prison, he has been beaten up in custody, he has faced humiliating personal allegations and he has health problems – in particular, a bad back, that he blames on mistreatment in prison. But nonetheless, he has made a political comeback.

In 2008, Anwar’s opposition coalition won 82 seats in Malaysia’s 222-member parliament. For the first time for many decades it is possible to imagine the ruling party, the United Malays National Organisation (UMNO), losing power. But, as a result, Anwar is a marked man. In the coming days, as well as going on trial, he is likely to be suspended from the Malaysian parliament, following allegations he made about Najib Razak, the prime minister.

Personally, I think if I were in Anwar’s situation, I would have thought seriously about not taking that plane back to Malaysia. But he flew back the next day.

What is it that keeps someone like him going: courage, a strong family, a sense of duty, ambition, stubbornness? Probably, a little bit of all of the above. A sense of destiny also helps. When I asked Anwar if he thought he would one day be prime minister, he smiled and replied yes. - by Gideon Rachman

He's a fighter, a true warrior, a patriot to the nation. They're rare but luckily in Malaysia, we are blessed with this man. DSAI, you're the man!