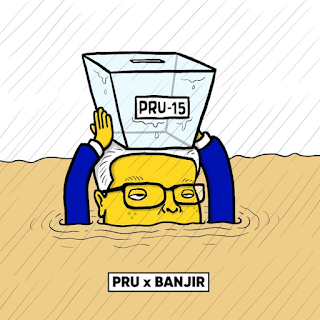 What is govt trying to prove
in holding GE15 this year?
It is crystal clear now. Umno has decided - via its supreme council - to dissolve Parliament in order to pave way for the 15th general election to be held this year. What message does Umno intend to drive home? Is Umno trying to say that we Malaysians should fully enjoy going to the polls during the monsoon season?
When Umno's secretary-general merely cited Article 40(1) of the Federal Constitution in saying that the prime minister would advise the King to dissolve the Parliament, many constitutional experts smell a rat.
Yes, by virtue of Article 40 (1) of our apex law, the King has to act on advice. No one is quarrelling with Umno on that provision. Malaysians have long accepted the doctrine of constitutional monarchy. It is one of the indigenous elements of our supreme law.
What puzzles many constitutional experts is the brazen act of Umno in deliberately withholding other corresponding and cogent provisions duly enshrined in the same highest law of the land namely Article 40(2)(b). Is Umno attempting to mislead the nation?
Article 40(2)(b) is worded as follows "the Yang di-Pertuan Agong (YDPA) may act in his discretion in the performance of... the withholding of consent to a request for the dissolution of the Parliament." Article 40(2)(b) is as clear as day. What the provision says is what it intends to say. And what it intends to say is what it says. It confers our King almost an absolute discretion to withhold consent to a request by the prime minister to dissolve the Parliament.
Yes, the prime minister has the right to propose the dissolution of Parliament but the YDPA, on the contrary, retains a wide discretion to oppose it. Therein lies the efficacy of the power of discretion. Otherwise, Article 40(2)(b) would be a mere otiose provision.
One who disputes such an enormous discretion duly conferred to the YDPA in Article 40(2)(b) should also, in the same vein, question the discretionary power of the King to appoint a prime minister for the power to appoint a prime minister is also encapsulated in the same article albeit in sub-article (a).
Hence Umno is advised not to blow hot and cold on this matter. Generally speaking, our Constitution recognises the principle of a constitutional monarch which, in essence, enjoins the YDPA to act on advice. Having said that, I also respectfully submit that every general rule is often subject to certain reasonable exceptions.
In our current constitutional make-up, the King is duly empowered to act at his discretion in certain circumstances such as in appointing a prime minister or in withholding consent to dissolve Parliament or declaring an emergency pursuant to Article 150(1) of the Federal Constitution.
We may recall that the YDPA did exercise his discretion in rejecting the proposal to declare an emergency prior to this.I would say that such an inherent and residual power by our King would be extremely vital assuming there is a subtle attempt by some political actors to subvert democracy.
It goes without saying that at present, people are preoccupied with the monsoon season. At any time now till December, our nation may be potentially hit by an imminent danger - a big flood in many flood-prone areas.
As far as Umno is concerned, having a general election during monsoon season is not really a big problem. The Umno president has contended that Umno has no problems carrying out its electoral campaign during a flood season as if an election is merely an electoral campaign alone.
Umno desperately wants to win the election for certain obvious reasons by hoping, inter alia, a low turnout of voters in the election. The party seems to be oblivious to the fundamental right of voters to participate in the election and the duty of the government, in turn, to ensure such a right could be easily exercised.
It is an irony of the first order that a political party which actively participated in betraying the people's mandate via the "Sheraton Move", has the audacity to parrot the words "people's mandate".
The idea of proposing to dissolve Parliament - like it or not - is viewed to serve Umno's vested interest only. Period. - Mohd Hanipa Maidin
Zaharin boleh tanding
di Bagan Datuk... 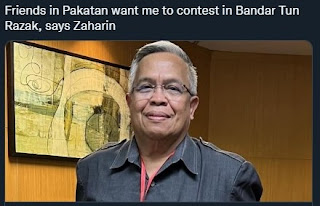 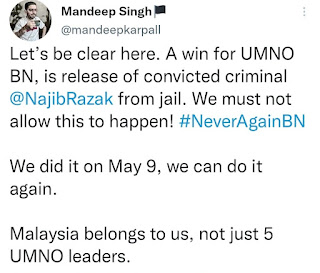