Most of us have no idea what the prison routine is like, but judging from what we read in the papers and watch in films, as soon as a sentence is passed by the judge, the prisoner is taken straight to prison from court. In prison, the prisoner surrenders his belongings. He is not allowed a mobile phone.
In Malaysia, he is stripped of his honorifics and becomes just a prisoner recognized by his serial number. He is no longer the celebrity or high profile personality of the world outside. In prison, he is just another person who will spend time behind bars. He may be allowed to keep a small amount of cash for phone calls. Depending on the type of crime committed, he may be strip searched.
The prisoner eats what the prison kitchens serve, and there are no special dishes or treats, but if he works in the kitchen, it is possible that he may have access to some extra food. At meal times, the prisoner is not waited upon and served, like he would be in a fancy restaurant. He queues up with the other inmates, and his food is dished onto a tray.
He follows the strict prison schedule and is woken up very early in the morning. He must return to his cell at a set time in early evening and his cell-door is locked until the morning. There are specific times for a shower. There are no hot and cold water taps. There is only cold water. His cell will have a toilet bowl and sink, and there is no privacy for him to wash, or when he answers the call of nature.
In Malaysian prisons, we are often told that the toilet is just a hole in the floor. Perhaps, this hole in the floor is actually a squat latrine. Prison life is not like a hospital where he can have frequent visits from family or friends. It is not a holiday camp where the prisoner can just wander around and do as he pleases. He must follow the rules.
To access books, he puts in a request for reading materials. When he is allowed visits, his visitors cannot smuggle food, drugs or other items. If caught, the penalties are severe. If the prisoner is deemed to be a target for some groups of inmates who may wish to harm him, the warden may decide that the prisoner should spend time in isolation for his own safety.
We are often told that in Malaysia all prisoners are treated equally and that the convicted felon, Najib Abdul Razak, will not be given special treatment. Most of us find this hard to believe.
The prison service may claim that all prisoners are treated equally, but from what we read, it appears that Najib is more equal than everyone else. 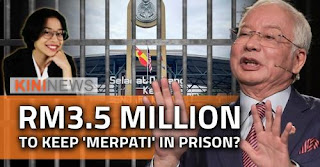 Anwar - Don’t compare Najib’s prison treatment with mine...
Many Malaysians reacted with outrage when Najib fell ill after a week in prison in Kajang, and was rushed to the Kuala Lumpur Hospital. The prison clinic was allegedly inadequately stocked with medicine and highly qualified medical staff.
We then read news reports that Najib’s daughter and family complained about the inferior treatment he received in hospital, and this prompted Ismail Sabri, the prime minister, to demand that the hospital give Najib the best medical care.
Why should Najib receive special treatment? Why should the prime minister intervene? What have the other prisoners, not just in Kajang but throughout Malaysia, have to say about this? What are the reactions of the families of prisoners, some of whom may have also needed urgent and specialized medical care but were denied these whilst they were in prison?
We are also informed that Najib and the other prisoners are given five meals a day. The shame is that outside of the prison walls, some families cannot even afford one meal a day. Most people only have three meals a day, but why is Najib having five meals a day?
Najib must attend his ongoing 1MDB trials. Why wasn’t he transported in the police van, the Black Maria, and why was he all dressed up in his suit and tie? Is it too humiliating for him to be dressed in the orange prison uniform?
By all means look smart, but being suited, makes a mockery of justice. Why should Najib be allowed to cause havoc and dissatisfaction in the prison? We are told that his cell has an electric fan. He is protected by guards because people may wish to harm him. Why not just put him in solitary confinement? Why waste more taxpayers’ money on him? 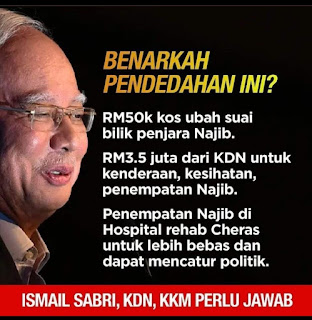 Now is not the time to feel sorry for Najib. Did he feel sorry for the rakyat when he stole hundreds of millions of ringgit from them? There are strong rumors that Najib’s cell is being renovated to make him comfortable. Do the authorities think Najib’s stay should be treated like a trip to Disneyland?
What about the other prisoners? This is not equality if the same preferential treatment is not extended to other convicts. The rumors also talk about Najib being given a phone and WiFi. These should all be banned. Prison life is supposed to teach Najib a lesson for all his wrongdoings.
Najib committed some very serious crimes. He should be deprived of all the freedoms that a normal person enjoys. Many Malaysians compare Najib’s preferential treatment with that received by other inmates. Some did not receive medical help and sadly died in prison.
Conversely, Najib was rushed to Kuala Lumpur Hospital where he was immediately seen by the doctors. Even ordinary Malaysians take months just to receive specialist treatment! The prison service may claim that all prisoners are treated equally, but from what we read, it appears that Najib is more equal than everyone else. - Mariam Mokhtar 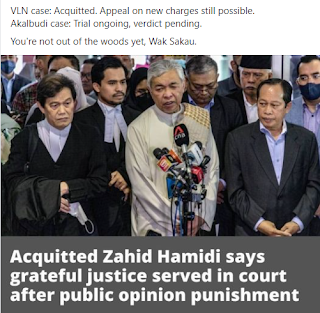 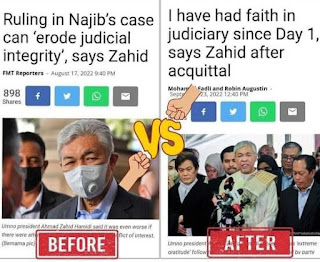 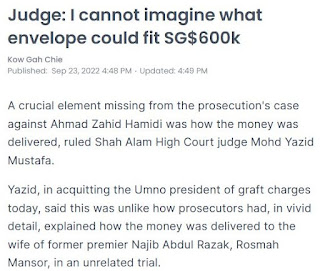 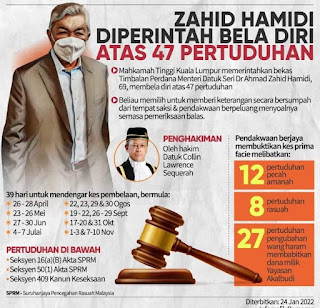 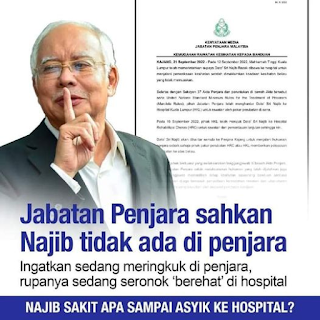 Wayang jer...
Today the Prisons Department has confirmed that Najib is NOT in jail. The Prison's Department refers a KL High Court ruling dated 12 September 2022 that Najib be taken to a hospital for medical treatment. NINE days ago.
I say Tuan Ketua Pengarah Penjara, today is 21hb September 2022 lah. Nine days have gone by. In those nine days Najib has already been taken to this hospital and that hospital.  According to the Court order. The KLGH has already checked his condition and confirmed that Najib was in good health.
Now he is in Cheras Rehab Hospital. The question is how long will Najib be out of jail and at the Cheras Rehab Hospital? Is 12 years possible? Ok there is a lot of heat over this case. It is a matter of time before the PM Ismail Sabri has to put his foot down and step into this matter.
The PM is in New York (or on the way, he did not inform me lah) for that UN General Assembly. Maybe he will have to sort this out when he gets back."Sort this out" means Najib has to go back to Kajang Prison. There are no two ways about this.
Someone mentioned physiotherapy. For what? High blood pressure? Stomach ulcers? How can you treat stomach ulcers or high blood pressure with physiotherapy?  Google says :"People with hypertension should engage in at least 150 minutes of moderate aerobic intensity exercise or 75 minutes a week of vigorous-intensity exercise. They can involve in activities such as walking, jogging, swimming, etc"
I walk about 30 minutes within an hour after food. Sometimes after breakfast, lunch and dinner ie three times a day. Slow and steady, no need to hurry. And I walk up and down the stairs. It helps with the blood pressure as well as lowers blood sugar levels.  So that is also physiotherapy. Just do it by yourself.  No need to go to Cheras Rehab Hospital to go for a walk.
But here is the real situation. As the video above says Najib has never had to sleep on a thin mattress on a hard bed and without air-conditioning even for one day in his life. Or poop into a toilet or some container inside his jail cell. This is obviously quite unbearable for Najib who is 69 years of age. 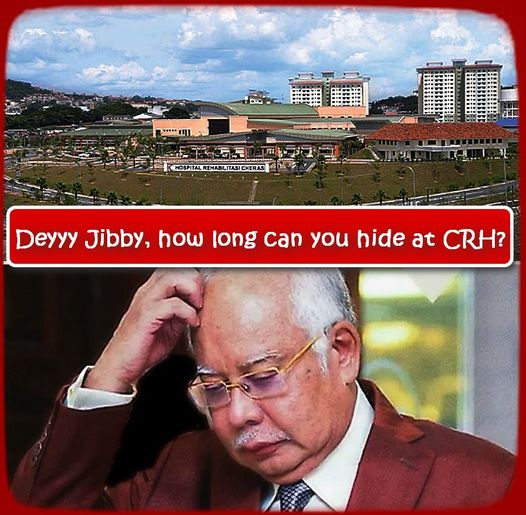 People want to see pigeon treated like other prisoners. Today, many people no longer believe in the statements of the Minister and the Department of Prisons unless they see genuine pictures of pigeon dressed in prison uniforms.But don't try to cheat with "photoshop" pictures because experts can  identify between original pictures and photoshop pictures!...
And this escapade about being admitted to the Cheras Rehab Hospital is going to cost UMNO and BN even more votes and loss of seats. The general public is fed up of hearing this Najib saga still not coming to a conclusion. Conclusion means lock him up inside the Kajang Prison and thats it.  UMNO is going to lose more votes.
As I said before Najib will not be able to make it through 12 long years inside jail. It has only been just over a month since his sentencing and already we are seeing all sorts of drama.My advice to Najib is JUST CHANGE YOUR PLEA. PLEAD GUILTY TO ALL THE CHARGES, INCLUDING THE JUST CONCLUDED SRC CHARGES.
Stop wasting your life, stop wasting the Court's time. Plead guilty to all the charges. Undertake to fully refund ALL the moneys that you have stolen. And your wife too. ALL THE MONEYS. 1MDB, SRC, L-S, O-V, Scor--ne, etc etc. Cooperate fully with the authorities. Fully divulge  all names of co-conspirators, what where when who why and how. The complete details. In exchange negotiate for a much reduced jail term and transfer to a nicer cell in a lower security jail (like the Taiping Jail).  Stay there for a few years and then go through the pardons process.
Because here is the situation - UMNO is already inside the tong sampah. It will be a very long shot for UMNO to win better than 35 seats in GE15. Imagine UMNO is worse off after GE15 than they are now. When that happens, no one will care about Najib anymore. UMNO is already moving on beyond Najib. How many Ketua Bahagian are also travelling to New York?
So do not be foolish again. It was your foolishness that got you messed up with 1MDB. It was your foolishness that messed up your defense strategy in Court and it was your foolishness that has got you crapping in a can in a jail cell. Stop being foolish. Just change your plea and plead guilty to all charges. Return ALL the moneys you stole. Divulge full information. Then negotiate something to make your life easier. - Syed Akbar Ali 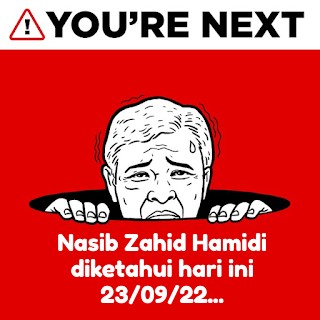 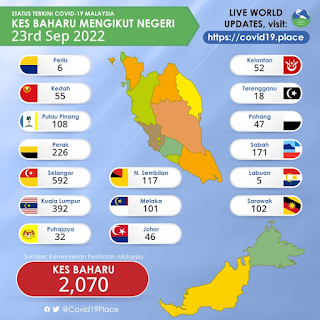