I did not bring knife to demo, says Ajak... 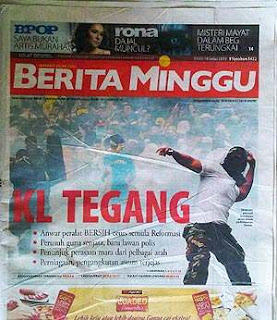 The man behind the image of an alleged 'violent protester' that was splashed on the front pages of the country's major newspapers after the Bersih 2.0 rally on July 9 has stepped forward.

Speaking at a PAS ceramah in Kuala Lumpur on Saturday, Abdul Razak Endut said that the alleged knife he was holding was a Malaysian flag and he was not throwing rocks at police.

“When the FRU fired tear gas, I saw the wind blowing towards the demonstrators. I picked up the canister and tossed it to a grass field with the hope that the demonstrators would be safe,” said Abdul Razak.

Previously referred to by his nickname Ajak in the media, he was part of PAS's Unit Amal volunteer corp responsible for crowd control near Menara Maybank on that day. Malay daily Berita Minggu had on July 10 front-paged the picture of a heavily-built man in a white T-shirt with a black cloth wrapped around his face. The man, shrouded in smoke, was depicted hurling an object with his left hand while in his right was what appeared to be a knife handle.

Sporting the exact outfit in the picture, Abdul Razak unwrapped the black cloth, revealing his face to the cheers of those in attendance. Abdul Razak explained that earlier, he had joined others in forming a human shield to prevent police advances on demonstrators. 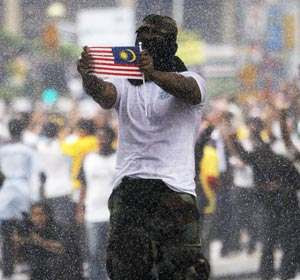 “However, that did not happen. Instead, the Federal Reserve Unit (FRU) brought in water cannons and fired on us. What should I do to stop the FRU truck? I asked for a (Malaysian) flag from a fellow demonstrator, he gave it to me and I held it against the FRU's water cannon barrage.

“I had hoped... these people behind are Malaysians, your people, why are you doing this?” he said in an emotional voice.

The image of Abdul Razak resisting the water cannon spray with the national flag was captured by Reuters and has been used to dimiss claims that it was a knife.

“At that moment (when I tossed the tear gas canister away), my picture was manipulated, showing I brought a knife. How can it be logical for me to bring a knife from Temerloh? I had to go through three roadblocks (to get into the city),” he said.

On July 12, Penang PKR Youth had claimed the image was doctored. New Straits Times Press Berhad (NSTP), which is responsible for the Berita Harian and New Straits Times publications (Sunday versions are Berita Minggu and New Sunday Times) has denied such claims.

Can a member of the Bar \Council help him to sue the newspapers concerned free of charge and then split the compensation on a 50-50 basis.