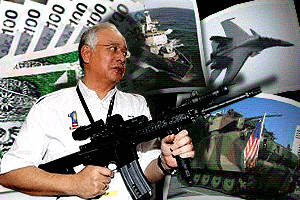 The rally was to call for electoral reforms, a domestic issue that attracted only the Malaysian press. But when riot squads aimed teargas canisters at opposition leader Anwar Ibrahim’s head, actually hitting his aide’s eye, and causing the fatal heart attack of one demonstrator, the event drew world attention.

Now international groups are denouncing the mayhem as proof of Najib’s disregard for human rights. Worse, there’s sudden global interest in an imminent subpoena of Najib to a Paris trial on kickbacks in purchasing three French submarines in 2002, and the consequent murder of a Mongolian socialite in 2006.

Narratives jibe that marchers were on their way to a downtown stadium from different parts of the capital when confronted with teargas and chemical-laced water cannons. Even if the storm does not affect next year’s setting of national polls, the fallout predictably will hurt Najib.

Najib allegedly has concocted sexcapades to bring down arch foe Anwar. Not only has the scheme backfired, Najib is now himself under fire for immorality. Trial is to begin of French arms giant DCN-Armaris for bribery in the 2002 submarine sale to Malaysia through then-defense minister Najib. Commissions supposedly came in three tranches: first euro 30 million upon contract signing, then euro 114 million subcontracted to an unknown firm owned by Najib’s security adviser Razak Baginda, and last euro 2.5 million.

From reports, Najib, Baginda, and their purported shared Mongolian girlfriend Altantuya Sharibu motored around France after sealing the deal. Najib and now London-based Baginda will be summoned to Paris as soon as a judge is assigned to the case this month or next. 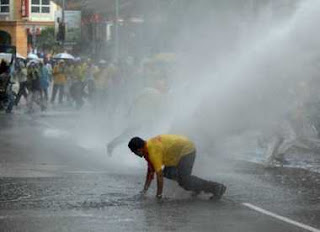 The bribery worsened into kidnapping-murder when Altantuya raucously tried to collect her euro 350,000-share from Baginda in 2006. Najib’s jealous wife Rosmah forbade the men from paying her a single cent, provoking Altantuya to picket their manor.

Two Najib bodyguards abducted the pregnant Altantuya, shot her dead in the woods, and burned the corpse with military explosives. Party mates nevertheless made Najib prime minister in 2009. The bodyguards confessed and were convicted last year; Baginda was acquitted. Prosecutors, defense lawyers, and the judge were forbidden from mentioning the sleazy submarine deal during the trial. Still, Najib got an international black eye.

France has no power to compel the attendance of Najib or Baginda. But it can demand the truth from DCN-Armaris. And the world will be watching, now that Najib has turned the spotlight on himself with last weekend’s tyrannical squashing of dissent.- Jarius Bondoc

This is an excerpt from an article,'PM Najib's tyranny draws focus on bribes, murder'- The Philippine Star. Continue reading here.