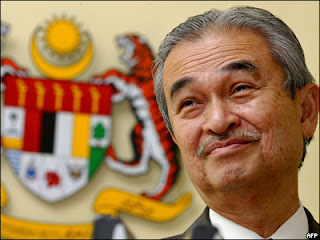 The Reserve Bank of Australia's banknote firms are suspected of attempting to bribe former Malaysian prime minister Abdullah Badawi in order to get his help to win a $31 million currency contract.

Mr Abdullah is one of a several highly influential Malaysian political figures whom anti-corruption authorities believe Securency and Note Printing Australia— firms respectively half and fully owned and overseen by Australia's reserve bank— allegedly sought to bribe using part of $4.2 million in commission payments made to two Malaysian middlemen.

Malaysian sources confirmed to The Age that the Australian Federal Police have gathered information about attempts to bribe Mr Abdullah by Securency and Note Printing Australia, which are respectively half and fully owned and overseen by the RBA. The Age sought comment from Mr Abdullah last night.

Asked about the approach to Mr Abdullah yesterday, an AFP spokesman said: "Given that matters relating to investigations into Securency International and Note Printing Australia are currently before the court, the AFP is unable to make any further comment." It is understood the attempt to bribe Mr Abdullah related to contract negotiations that occurred around 2003, the year he became prime minister and finance minister. He served as prime minister until 2009.

Before becoming prime minister, Mr Abdullah was deputy to long-serving Malaysian leader Mahathir Mohamad. The alleged attempt to bribe of Mr Badawi, who remains a serving MP, adds to the list of high-profile Asian politicians and central bank officials targeted by the RBA firms.

The revelations about the attempt to bribe Mr Abdullah come as the fallout from Australia's plastic note bribery scandal continues to spread, with The Age reporting yesterday about the intimate involvement of senior officials from the Australian government trade agency Austrade in Securency's allegedly corrupt Vietnam dealings.

Mr Abdullah is believed to have been involved in approving the contract won by the RBA firms to supply Malaysia with its polymer five Ringgit note, which began circulating in 2004.

Securency and NPA's agents for the 2004 were former state MP and senior figure in the country's ruling party, UMNO, Dato Abdullah Hasnan Kamaruddin and arms trader Abdul Kayum, who was arrested and charged on friday with two counts of bribery.

Mr Kayum, who pled not guilty to the charges, worked as NPA and Securency's main middleman in Malaysia and allegedly promised the firms that he was able to convince senior Malaysian officials to buy the plastic bank note technology.

Did Abdullah succumb to the temptation? If he did, then he is helping the opposition to oust BN soon. What a fate for this 5th PM of Malaysia. A total write-off! LOL!