We will be at Stadium Merdeka Saturday.... 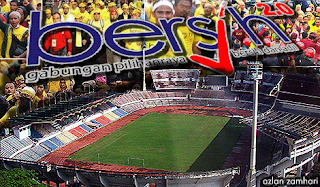 Bersih 2.0 has declared its rally planned for July 9 will happen at the Stadium Merdeka regardless of the pronouncements of its detractors otherwise.

In a statement issued late this evening signed off by the full membership of its 14-member steering committee, the coalition calling for clean and fair elections said they “will not for one moment be swayed from our decision to gather there peacefully.”

Setting aside the warnings, threats and clampdown seen the past two weeks against public displays of support for the rally planned for this Saturday, they expressed disappointment with what they said was Prime Minister Najib Abdul Razak and his cabinet's betrayal of an earlier promise to allow the much anticipated rally to take place within a stadium.

Come what may, they declared, Bersih will exercise “the constitutional right to gather peacefully for a just and reasonable cause”, and that will “is unwavering”.

“Bersih 2.0 is disappointed in the manner in which the Prime Minister and his cabinet has reneged on their offer to provide a stadium for us to hold our peaceful gathering.

“As members of civil society that are committed to principles of integrity, we fully intend to abide by the advice of Tuanku DYMM SPB YDP Agong and hold our gathering in a stadium to state our demand for clean and fair elections.

“We have chosen Stadium Merdeka as the best venue for this event, due to its symbolic nature and central location, and we will not for one moment be swayed from our decision to gather there peacefully.

“If the Prime Minister is a man of his word, he will make the appropriate arrangements for the event to proceed peacefully at Stadium Merdeka,” said the statement.

Bersih to rally in Stadium Merdeka despite Cabinet refusal