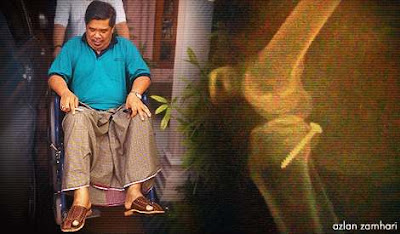 PAS deputy president Mohamad Sabu swatted aside claims that he is playing up his knee injury - sustained when he was allegedly run down by a police Land Rover - to fish for sympathy.

The veteran politician, known for his engaging and sometimes fiery oratory, claimed that he is still fit enough to take to the podium for half an hour despite still being consigned to a wheelchair to recuperate from a recent operation to fix his knee.

"I can (still) speak for 30 minutes. Even the doctor said (I) can move as far as I am able, (and) the doctor gave me painkillers and antibiotics," he said when met at his home in Shah Alam.

Last Friday, Mat Sabu, as he is popularly known, went under the knife to repair a torn ligament in his right knee, which he alleged was a result of police ramming a Land Rover into the motorcycle he was riding to Masjid Negara to join the Bersih 2.0 rally.

The procedure, carried out at the KPJ Selangor specialist hospital in Shah Alam, involved drilling a 2.5-inch long screw into the back of his knee to keep it in place.

Mohamad is now able to lift and stretch his leg and walk with a limp with the aid of a walking stick, but still clearly experiences pain though can still manage sliding in smiles and laughter in between grimaces. 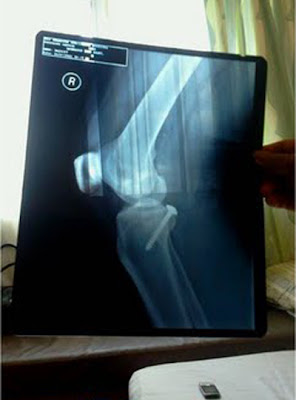 On the way down the stairs of his house before the interview, he appeared tired out by the effort but still managed to throw in a joke amidst the panting.

"Youngsters would be jumping around after five days. It will take a little longer for old timers," he said with a smirk.

Mohamad, who turns 58 this October, said he was quite disappointed with the mainstream media's spin on his injury, which claimed that he is merely fishing for sympathy by getting wheeled in to visit the Selangor state assembly during last week's meeting.

"I am not acting," stressed the former ISA detainee, while pointing out that it will take between one and two months for his injury to heal.

Mohamad said he has since cancelled all his prior engagements to speed up his recovery, though he did not discount the possibility of turning up at some events if invited.

He added that he may go back to his hometown in Penang to get some traditional treatment while taking the opportunity to spend some time with family and friends.