MACC a house of criminals.... 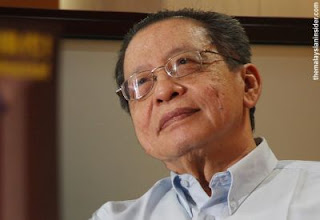 Responsibility for the death of political aide Teoh Beng Hock lies squarely on the shoulders of the BN, which created a monster in the form of the Malaysian Anti-Corruption Commission (MACC), senior DAP leader Lim Kit Siang says.

Lim said the recently released report of the Royal Commission of Inquiry into Teoh's death details a "horror" story that clearly outlines the gross abuses of the power MACC wields.

"We let Parliament pass it (the MACC Act of 2009), gave it increased powers and funding, all sorts of support (were) given. What has happened? It became a monster," he told Malaysiakini in an exclusive interview.

Lim, who donned a pair of dark glasses following an eye operation, accused the BN of using the MACC, particularly the Selangor MACC, to further its political agenda in wresting the state back from Pakatan Rakyat rule.

He said the RCI finding - the first document he has personally read since undergoing an operation on his left eye last April - pointed to "utter contempt of the law" by MACC officers and gross abuse of power in carrying out an operation against Pakatan elected representatives that had no basis.

However, Lim's biggest target was the then Selangor MACC deputy director Hishamuddin Hashim, who he accused of serving the will of the BN through the many officers he roped in to carry out the investigation and raids on Teoh's boss, Seri Kembangan state assemblyperson Ean Yong Hian Wah.

Lim went on to accuse Hishamuddin, who was promoted to Negeri Sembilan MACC chief after he was taken off Teoh's case, of leading a "massive operation", with MACC officers who "broke law after law, not only the SOP (standard operating procedures) but all the laws". 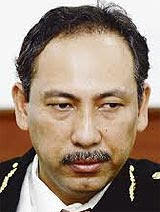 He added: "It is very clear. Hishamuddin (left) was the deputy director, but he acted as if he was more powerful than the director, even without referring to the headquarters.

"It cannot be only (an) anti-corruption operation. Definitely this was part of a political agenda, to topple Pakatan in Selangor (by) going for a DAP, Pakatan assemblyperson, and that must be (the) background to it.

"Otherwise, how can a person, a deputy director, have such great powers, acting and believing he can act with utter immunity and impunity? And he is not someone who is a newbie. He's got 19 years in the MACC, and suddenly, he acted so arrogantly.

"I'm sure (this is) because he was serving a political agenda, and that can only mean the BN agenda to topple (Pakatan)."

'Shut down the MACC'

Lim brushed aside claims that the DAP has been milking Teoh's death in custody for political mileage, stressing that the issue at hand was holding the MACC to account, particularly since it was formed to replace the discredited Anti-Corruption Agency (ACA).

As an immediate measure, he said, the MACC should suspend Hishamuddin, investigating officer Mohd Anuar Ismail and assistant superintendent Mohd Ashraf Mohd Yunus - the three officers said to have used "aggressive" and "inappropriate" interrogation tactics on Teoh - besides charging them with breaking several laws in the course of their investigations.

Lim added that the trio, and most of the other MACC officers called to the witness stand during the Teoh RCI, should also be charged with perjury, since the Royal Commission had found that many of them - save for two officers - had lied in their testimonies.

Lim stressed that it was unacceptable for the MACC, which was formed with the aim of restoring public confidence in its ability to operate independently, professionally and efficiently in combating graft, had ended up doing the complete opposite.

Taking the example of the hostile takeover of the Perak state government in 2009, when the MACC investigated the then speaker V Sivakumar for alleged abuse of power, Lim said the three officers involved should likewise be investigated on the same grounds as in Teoh's case.

"The MACC, particularly the Selangor (MACC), has (become a) house of criminals who break laws left, right and centre. (It's) completely lawless.

"This is so ridiculous. If somebody lists down the crimes committed in the whole Teoh Beng Hock episode, I think you will have a very long list.

"I think we should seriously consider closing down the MACC and having another anti-corruption body, if that is possible. If that is not possible, then the only way is for a change in Putrajaya; maybe that (Teoh's case) is the last straw... it is not a question of politics, but a question of survival," Lim said.

MACC – WHAT IS TO BECOME OF IT?

The corrupt DAP leaders in Selangor is also the criminal as they are the cause of the unfortunate incident that made TBS to commit suicide. They should also be charged in court.

Hei what about the corrupt BN leaders who always get a pat from the MACC?