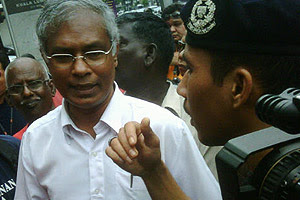 Apart from Jeyakumar, 56, the other members are PSM deputy chairperson M Saraswathy, 58, central committee members Choo Chon Kai, 33, M Sukumaran, 50, Sungai Siput branch secretary A Letchumanan, 49, and Youth leader Sarat Babu, 25. According to a PSM tweet earlier, they are to be brought to the federal police headquarters in Bukit Aman, Kuala Lumpur.

The group was released from IPD Kepala Batas, Penang this afternoon, but re-arrested by Bukit Aman police outside the station, said PSM treasurer A Sivarajan during a press conference outside Butterworth court.

"The six were released... but they were still in the police compound when they were re-arrested and told they were being arrested under the Emergency Ordinance," said Nalini Elumalai, a representative of rights group Suaram.

The Emergency Ordinance is similar to the Internal Security Act, which allows police to detain suspects for up to 60 days.

Deputy inspector-general of police Khalid Abu Bakar said at a press conference today that the six were arrested under section 3(1) of EO, while the remand for the remaining 24 detainees will be extended.

According to him, the police have intelligence indicating interference by foreign powers trying to "harm public order" and as such action must be taken to prevent potential violence and criminal activity. Khalid said that a total of 150 people have been arrested so far in connection to the Bersih crackdown.

The six detained under EO are part of 30 nabbed on July 25 while aboard a bus at the Sungai Dua toll plaza, and the party members are being investigated under Section 122 of the Penal Code for the charge of waging war against the king.

On Thursday July 30, Penang High Court maintained that the six were to be remanded until today. 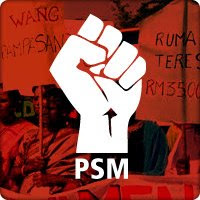 In an immediate response, PSM said the police force was being “used as a political tool by the government of the day” and was a “gross violation of human rights” and pointed out that it was an “outright political decision” by the Umno-BN government.

“First (they called it) an illegal assembly, second it was sedition, third it was Printing Presses Publications Act, fourth it was waging war against the Agong and the link to the Malaya Communist Party (PKM).

“After all this political drama, finally it is now the Public Order and Prevention of Crime (POPO): Emergency Ordinance,” read an email statement from PSM secretary-general S Arutchelvan today.

He said the “highly inconsistent charges” only shows the ill intentions of the authorities in the recent police crackdown.

The party secretary-general demanded an unconditional release of all detained, calling upon “all international and local comrades” to put pressure on the government.