Its so stupid to say that this has to be the work of Bersih... 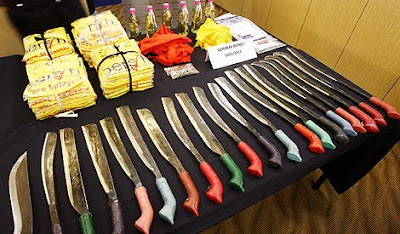 Would you believe that the findings of weapons, explosives and Bersih yellow colored T Shirts by the police in KL recently is the work of the Bersih organizers or its supporters?

And do you not see how irrational and stupid the police were in pointing their ten fingers and declaring that this has to be the dirty work of Bersih?

Wasn’t I right in saying that the Special Branch officers today are no longer of the caliber of those officers of the 60’s and the 70’s?

I am not a full fledged intelligence trained retired military officer, but having seen and worked with some Special Branch officers of the 60’s and 70’s, I think by preempting that the ‘loot’ to be the work of Bersih, even without making a thorough investigation first, is arguably stupid and dumbfounded. Special Branch officers of yesteryear's and the many that I am personally acquainted with would not have come out with such a preposterous conclusion.

Anyone with a bit of common sense would not want to do what the supposedly ‘perpetrators’ did for the following reasons:

1. Placing the ‘loot’ at a conspicuous place to be easily noticed by the public.
2. The timing for placing the ‘loot’ is also not right. If someone seriously wants to create problems, they would do it at the very last minute and in the most secured place.
3. Surely, the ‘perpetrators’ has to make sure that their act is not seen by anyone. They would have to surveil the area first before doing their job.

What is most amusing is the claim that several Bersih yellow shirts were also found among the ‘loot’. My guess is that these shirts must be the ones taken by the police in their raids or stripped off their owners during the arrests. My common sense tells me that it is merely a ploy to reinforce the police claim that it is indeed an act perpetrated by Bersih or its supporters. I don’t buy this kind of bluff my dear friend.

Please, I have had enough of this nonsense. Now that PM Naijb has allowed the rally to be held at the stadium, let’s all join hands; Bersih, dissenting and pro-Bersih NGO’s, the opposition parties, Perkasa, UMNO Youth, police and all like-minded citizens, and together we gather in peace and harmony, to show our solidarity and demands for an election reform. Is this wrong?

And to Home Minister Hishamuddin, I am yet to hear you annul the order that the Bersih 2.0 rally an illegal assembly. The same goes to the IGP and his Deputy. And why don’t all of you join us in this peaceful rally? I am quite sure the people will offer you a bunch of roses. - Mohd Arshad Raji