Why the BN fears indelible ink and automatic registration ... 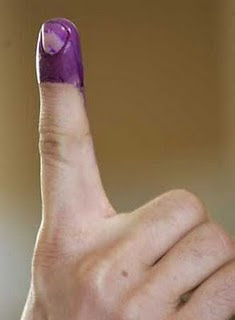 Back in 2008, the use of indelible ink was mooted and shelved at the eleventh hour. This shocked election observers and when questioned as to why the ink was not used, even-though a batch was bought from India, the Election Comission along with the Barisan Nasional government said in unison that it violated the citizens right to cast vote.

It is a rather mystifying reason, yet even-though the ink was not used in the 2008 election, it did not deter the public’s move to grant great gains to the opposition. If you take into account popular vote and not seat count, Pakatan Rakyat was almost dead even with Barisan Nasional.

And now with the 13th General Election looming - in the very near future - the issue of transparency in the voting process has surfaced again. The main contention for all is the existence of phantom voters. Voters who are registered in multiple places and even dead voters who resurrect just in time to cast their votes and then return to sleep for another five years.

Such is the fallacy in the Malaysian voting process that citizens have banded together to support the Bersih movement, that has an eight point recommendation to ratify some of the problems with elections in Malaysia.

In an obvious move to pacify angry voters, the EC has stated that they will put into place some of the recommendations by Bersih. Yet, there is one that remains a hotly contested issue - the use of indelible ink.

The EC said it is considering the use of a biometric system for voters’ verification in the general election. EC Chairman Abdul Aziz Mohd Yusof said the commission would first have to scrutinize the system before the implementation.

When the issue of why indelible ink was not used, the EC chairman added,”The proposal also contravenes Article 119 (1) of the Federal Constitution which guarantees every citizen’s constitutional right to vote in an election, and that right cannot be denied unless the registered voter is disqualified under the law.”

Yet, until today, no-one knows how indelible ink can contravene a person’s right to vote in an election. And the EC still insists it is independent from the BN political masters! It looks like the reason for such strong objection to indelible ink may only reside in the minds of the BN and its obedient Election Comission. Continue reading here.

To be fair why not do together use ink and biometrik.