Just what Malaysia needs: Another minister... 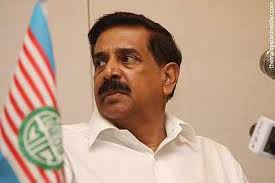 I hate to spoil the party but the last thing this country needs is another minister.

In fact, what we need is not quantity but quality. The last couple of months has shown up the inadequacies and incompetence of a number of ministers and exposed the paucity of talent in the Cabinet.

We have a Home Minister who did not know that EU citizens do not need a tourist visa (French lawyer Michael Bourdon had to educate him); a de facto Law Minister who misinterpreted a key fact in the Teoh Beng Hock Royal Commission of Inquiry and a Defence Minister who sounds shaky whenever he speaks.

And I have not even touched on the Agriculture Minister, Unity Minister, etc.

You can now understand why I greeted news of Palanivel's promotion with a shrug and a sigh. No doubt this is a reward for the MIC but it will sold as recognition for the Indian community.

Prime Minister Najib Tun Razak will wax lyrical about the Indians (never mind that a chunk of PSM6 were Indians!). The only people happy with Palanivel’s promotion will be Palanivel, Palanivel’s family and parts of the MIC (unity is still a problem with these guys).

For the rest of us, it will just mean another name in the Cabinet; another politician with a chauffer-driven car, a bodyguard and a security guard in his house. Another minister to an already bloated Cabinet. Truth be told, he will have little impact on the welfare of the Indians.

MIC kept quiet when the PSM6 were detained and only found its voice when the mood of public opinion stirred. Not too different from how the party handled the Hindraf problem. MIC and BN moved faster this time because they need the Indian vote more this time than in 2008.

Dr Michael Jeyakumar has got more credibility than Palanivel and all his CWC members put together. And that is not only because he was detained unjustly but because the man actually serves the rakyat.- Jacob Sinnathamby

PM adds Palanivel to the Cabinet