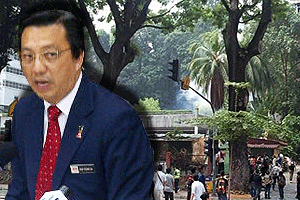 Health Minister Dr Liow Tiong Lai's (right) claim that the police shot neither tear gas nor chemical-laced water cannon into the Tung Shin Hospital and the adjacent Maternity Hospital compound as some quarters have purported.

The police meted the same treatment to participants of the Bersih rally elsewhere in Kuala Lumpur last Saturday.

A group of senior medical officers have issued a statement condemning the authorities over the police' attack on participants in the Bersih 2.0 rally last Saturday that had violated universal recognition of hospitals as a place of sanctuary.

In a statement issued to the media late today, the doctors - among whom were a number who were on duty at the Tung Shin and Chinese Maternity hospitals on Jalan Pudu when these were set upon by the police - said they are ready to issue affidavits to back their assertions.

Saying hospitals should be "safe sanctuaries for all" and "consecrated places of refuge and protection" even during war times, the eleven doctors and surgeons also condemned the police for entering the hospital buildings in search of some protesters trying to escape from the police crackdown on the peaceful march.

"What was most frightening and witnessed by many was the unprovoked violent assault within the hospital compounds and apprehension of several protesters who had merely ran into the hospitals to seek shelter from the tear gas and the water cannons!" the doctors said in the jointly-issued statement.

This is the first public statement made by medical officers following the police denial that personnel had shot tear gas into hospital compounds on July 9. 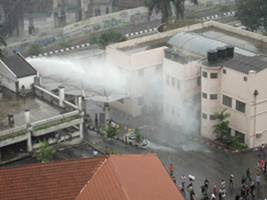 Numerous photos, videos and eye-witness accounts, however, contradict Liow's statements and support reports that water cannon and tear gas canisters were, in fact, shot into the premises, acts that placed patients in the hospitals in danger.

Among the latest to vouch for the latter version of events was the Bar Council, which issued yesterday a report of the observations of its monitors during the rally on Saturday and confirmed the incident.

All of the doctors blasted the authorities for "shamelessly" denying the occurrence of these incidents in spite of photo, video and eye-witness accounts.

"It is repulsive that the authorities entrusted with policing the nation and protecting the weak and needy, have shamelessly denied publicly, the occurrence of these incidents in spite of countless photos, videos and eye-witness accounts of what was evident to all independent observers." 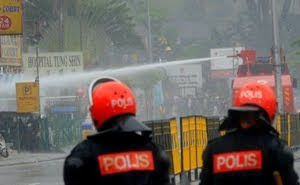 Saying they did not wish to join the polemics in the aftermath of the massive rally called by the electoral reforms group Bersih, the doctors, some of whom were actually visiting or working at the Tung Shin hospitals at the time of the events, said they are ready to provide sworn affidavits "if required, as to the veracity of the incidents."

"Their failure to do so raises the public's doubt in their competence and credibility as much as it demeans those in the high offices."