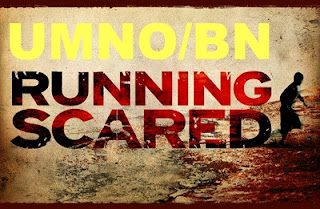 The BN government does not want the Bersih rally to happen at all costs. It believes that a mass gathering seeking electoral reform will be a catalyst of an Arab-style uprising which saw dictatorships fall.

As a result, it is using all sorts of draconian powers and arresting individuals under trumped up charges; declaring an unregistered movement illegal and behaving like the Myanmar junta.

So Najib appears to be really desperate by going to Kelantan and accusing Ambiga Sreenivasan of being enemy of Islam. (How can an individual who is fighting for cleaner elections, better institutions be demonised?)

This is my take: even if the rally does not take place on July 9, the big losers are Umno and BN. This is because despite having a mandate to rule and possessing all control over security agencies and royal houses, they have been scared out of their wits by a motley group of NGOs and politicians.

Their reaction suggests that they have no confidence in their own product or in their track record. They have given the Bersih rally legitimacy that it may not have had otherwise and made Ambiga a household name in urban centres.

At the same time, the actions and statements of Muhyiddin Yassin and Hishammuddin Hussein have shown what a paucity of competent leaders Umno has. So all in all, Umno and BN have come out looking decidedly second best.

Would it not have been easier for the government and the Election Commission to commit to a process of free and transparent elections? In normal circumstances, yes.

But a government which does not have the confidence that it can go to the polls and secure a two-thirds majority fairly has to hold on to its last big advantage whatever way it can. Even if it means using the ISA, locking up social activists and playing the race and religious cards.

Does this sound familiar to you? It should because at various times, the Myanmar junta, Mugabe of Zimbabwe and Bashir of Sudan have employed a similar strategy.- Former BN supporter

We shall see another Thailand very soon. http://malaysia-today.net/mtcolumns/newscommentaries/41635-opposition-wins-thai-election-by-a-landslide-polls