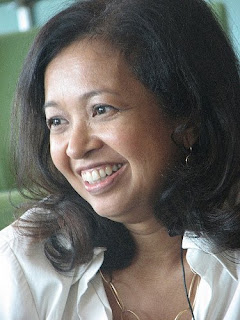 Datin Paduka Marina Mahathir today condemned the nationwide clampdown on Bersih 2.0 ahead of this Saturday’s rally, saying it was a clear indication that the authorities were running scared.

“Obviously, only those who are afraid will arrest people wearing T-shirts,” she said at a joint press conference attended by Bersih 2.0’s NGO representatives.

“I’d like to ask people, if they saw T-shirts with the words Bersih on them, would it incite them to go out and riot?

“We have seen worse words on various T-shirts around the country but none of it has made us go out and smoke ganja.”

Marina was speaking in her capacity as a representative of Sisters in Islam and the Joint Action Group for Gender Equality.

She is also the eldest daughter of the country’s fourth and longest-serving prime minister, Tun Dr Mahathir Mohamad, who has been often criticised for his hardline stance in wielding the Internal Security Act to silence opposition dissent.

When pointed out that it was her father who had used the ISA in a massive clampdown on the opposition during the infamous Ops Lalang in 1987, Marina moved to defend Dr Mahathir.

“I am here representing SIS and JAG. Did we arrest people for T-shirts at that time? No,” she said.

Marina, however, continued to criticise the authorities for their hard-line stance against Bersih 2.0 supporters, saying the current spate of arrests portrayed the country as “third world or less”.

“We should rise above that. We like to call ourselves a developed country and we look to first world countries as our standard, but then we should also behave in a first-world manner.

She added that the administration should have “more faith” in the people and raise its standards in how it dealt with matters like the Bersih rally.