Stop being 'kuli' of Najib or Hishammuddin.... 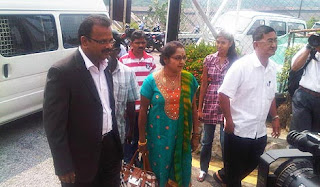 After waiting for one hour and 20 minutes, Kapar MP S Manikavasagam left the Klang magistrate's court an angry man when the police officers who told him to come here were nowhere to be seen.

According to the parliamentarian's lawyers the police personnel who want to charge him are seeking further instructions from Putrajaya. Manikavasagam said he is angry because he had been told by the police to come here to be charged.

“After waiting for one-and-a-half hours the officers who required my presence are nowhere to be seen. My lawyers who have been here since 9am have prepared themselves in defending me but they never came,” he said.

“If they require me to come, I will come but not on July 10, as I will be travelling abroad with other Mps from BN and Pakatan Rakyat at the invitation of an NGO,” he said.

Manikavasagam said he is angered by the police's high-handed action in arresting him and his aide yesterday.

“I was meeting four people at the Meru wet market and there were 100 police officers. What is this and what type of democracy is this when the MP cannot meet his constituents? This has nothing to do with Bersih or anything, I am not telling them to come or distributing leaflets or giving T-shirts. I am merely meeting them,” he said.

“The police should stop being 'kuli' (a tool) of Najib (Abdul Razak) or his cousin (Home Minister) Hishammuddin Hussein and following me around making it difficult for me to do my work as an MP. This is undemocratic,” he warned.

One of his lawyers, KA Ramu, said they had been in constant contact with the investigating officer, one DSP Chia, and Klang Utara Deputy OCPD DSP Bey Yong Lai, who had asked his client to be here before noon.

“Manikavasagam is obliging the request by being here when told he would be charged. However, when we called DSP Chia and DSP Bey, they said they are at Putrajaya seeking further instructions and asked him to go back,” he said.

“This should not be the police practice to create trouble, you have asked my client who is an MP to be here and then they are not? What is this? And now they are seeking further instructions,” he asked.

Ramu said the police should have thought that Hishammuddin's statement saying that Bersih is illegal was wrong as legally speaking this had to be gazetted.

“I have consulted many fellow lawyers on this - that to declare an organisation illegal, you must gazette it,” he said, adding this is a similar case to the Hindu Rights Action Force (Hindraf) group.

“I think the Attorney-General's Chambers may have a hard time in determining the offence,” he emphasised. However, Ramu said the law in outlawing Bersih cannot be applied retrospectively, as it must be gazetted first before someone wants to declare it illegal.

'Doing my duty as an MP'

An irate Manikavasagam denounced his arrest at 1pm yesterday, as he was not distributing any Bersih 2.0 leaflets or T-shirts.

“I was merely doing my duty as a MP in meeting Malay traders at the Meru market to settle their problems. I was not having a gathering or asking them to come to (the) Bersih 2.0 rally.

“I am angry as they (police) searched my car and found nine Bersih 2.0 T-shirts and leaflets. I was not distributing them or selling them but my aide placed them in the car,” he said, adding that his car was damaged as it was punctured, allegedly, by the police.

Manikavasagam questioned why he had been arrested as there was no gathering.

“Can't a MP do his job in meeting the people and resolving their problems? I can bring thousands of my supporters on July 9 but why charge me now?"

He said he will soon file a suit against Hishammuddin and the police for wrongful arrest.

it is wierd really..there u have hisammudin declaring Bersih an illegah organisation, and here we have Najib offering Stadium Merdeka for Bersih to shout themselves hoarse!! why offer an illegal organisation facilities?? don't u think the cousins are contradicting themselves??? no consistency..telling a lie to cover a lie..gone to the dogs really..hopeless.