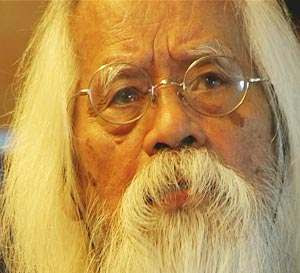 Despite his age, 76-year-old national laureate A Samad Said was not spared the police crackdown on the Bersih 2.0 rally last Saturday.

“When I arrived at Istana Negara, there were two policemen who were bengis (fierce)… they told us to disperse or they would use force against us.

“With the look on their faces, if they could, they would want to devour me,” said Samad..

In the third part of an exclusive interview with Malaysiakini on Thursday, the novelist and poet with his distinctive long white hair and beard, related his experience in trying to submit the Bersih 2.0 memorandum for free and fair elections to the Agong during the mass rally.

Samad was amongst the small group of protestors who had managed to march from KL Sentral - one of the flashpoints of the brutal crackdown due to the presence of top Bersih leaders there - to Stadium Merdeka and then to Istana Negara.

Earlier that morning, rally organisers had assigned two lawyers to bring Samad to the Hilton Hotel at Sentral after he expressed desire to join the demonstration. Once assembled there, the Bersih leaders held a press conference.

The gathered started to move out of the hotel towards their goal, at which point Samad found himself sandwiched by riot police at the KL Sentral underpass along with several other Bersih and Pakatan leaders.

“When tear gas was fired, we were trapped, like at Tung Shin (hospital)… we had no choice but to go through,” he said.

In the brutal police assault, several leaders were arrested, among them Bersih 2.0 chief Ambiga Sreenevasan, Bersih committee member Maria Chin Abdullah and PAS president Abdul Hadi Awang. Samad however evaded arrest and pressed on with other protestors, minus his chappals.

It was during the crackdown that Samad lost his footwear.

“I lost my chappals when I was hit by tear gas; it was chaotic. I ran to a wall to cover my nose and to find my water bottle and towel,” he said.

“I had to walk barefoot. There were stones on the ground. The other demonstrators offered me their shoes; one even offered me a Nike. I thought it was a nice pair of shoes ... I could not take them.

“Later, I was given a big pair of shoes until I arrived at Midah Hotel, Kampung Attap and someone bought me a new pair of slippers,” he said (photo below). 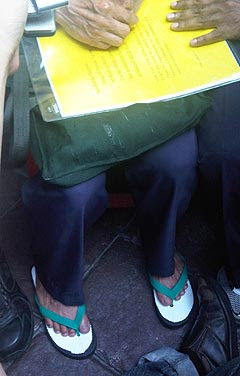 “Never have I seen a group of young people of different races united by a common ambition,” added Samad.

With many Bersih leaders arrested and his two lawyers escorts missing, it was left to Samad to press on with the mission with the remaining protestors. Two Bersih committee members tasked with handing Bersih's memo to the Agong later caught up with Samad.

“I was accompanied by spirited youngsters whom I had to calm down. Later two Bersih committee members accompanied me; they were the ones who brought the memo (to me) and helped control the situation.

“When we arrived at Stadium Merdeka, there were already many people (there). After discussing with the police… I started to sense danger as there were police behind us with water cannons ready.

“That was when I decided it was best for us to move on to Istana Negara,” he said. 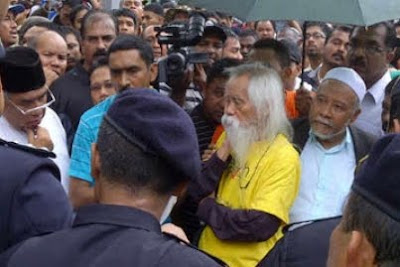 Asked how he managed to reach within 200 metres of the Istana gates when many others could not even get close, Samad attributed it to divine intervention.

“Many people asked me that question. It was with Allah's help,” he said.

Samad, who was not amongst the 91 served restriction orders - dismissed suggestions that the cops had given him special treatment.

“I was tear gassed too; I felt like I was going to die due to my age. I went prepared with water and salt but I could not use them.

“There were people left and right gasping for air, asking if I had water. I gave them mine, and later other protestors gave me theirs,” he said. 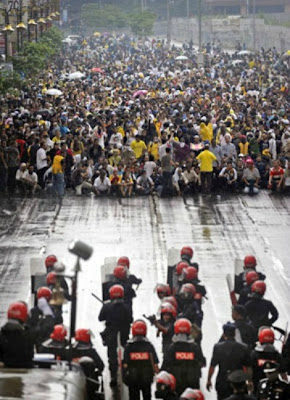 Samad was eventually stopped from completing the mission with just about 20 protestors in tow, with the palace gates in sight. Negotiations with the police failed and the group was forced to abandon their task.

"It is not my fault but the police's," said the septuagenarian at a press conference after the rally.

"I have decided to write a letter to the Agong later, to inform him that the Agong's readiness to receive the petition was not properly handled by the police. 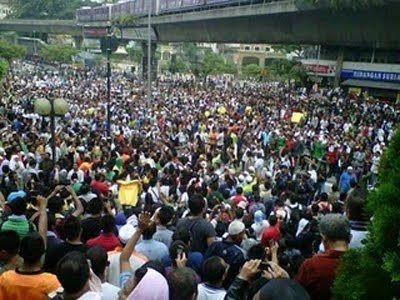 A week on, Samad remains resolved in his pursuit of democracy, saying that he would be prepared to march again.

“If I am still alive, if the cause is good for improving and strengthening democracy, why not? I am prepared,” he said.

“A literature scholar's duty is to the past; we record events. But I think with the turbulent situation now, we can no longer record the atmosphere. We too, become a trigger to that atmosphere.”.

Thank you Pak Samad. Luv u, u'r our inspiration...