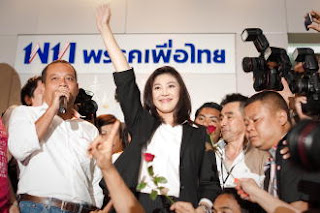 Opposition allies of Thailand's fugitive former leader Thaksin Shinawatra won a majority of 265 seats out of 500 in the lower house, the election commission said on Monday with all votes counted.

Outgoing premier Abhisit Vejjajiva's Democrats, who have already conceded defeat, took 159 seats, the poll body said. It said turnout was almost 75 per cent, roughly the same as in the previous election in 2007.

The Election Commission is, however, studying some complaints of possible irregularities, which could see candidates given 'red cards' and disqualified, potentially whittling down Puea Thai's majority.

The result is a remarkable comeback for Thaksin's supporters after his ouster in a military coup sparked years of turmoil, and his youngest sister Yingluck Shinawatra is set to become Thailand's first female premier.

Yingluck Shinawatra, who is set to be Thailand's first female prime minister, is a political novice whose biggest asset is also her most controversial - her family name.She is widely seen as a stand-in for her older brother, the fugitive ex-premier Thaksin Shinawatra who describes Yingluck as his "clone" and who has already called to congratulate her on an apparent landslide election victory.

According to exit polls, Yingluck has led Thaksin's Puea Thai Party to a landslide win, with a thumping majority of up to 313 seats out of 500 against just 152 for Prime Minister Abhisit Vejjajiva's ruling Democrats.

The photogenic 44-year-old businesswoman has run a polished campaign, defying sceptics who said the initial excitement over her nomination as the main opposition candidate for prime minister would soon fizzle out.- AFP 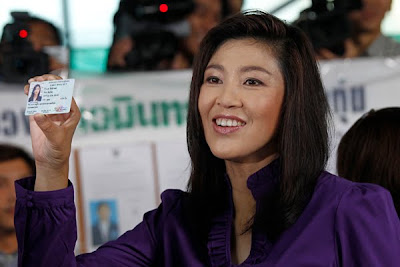 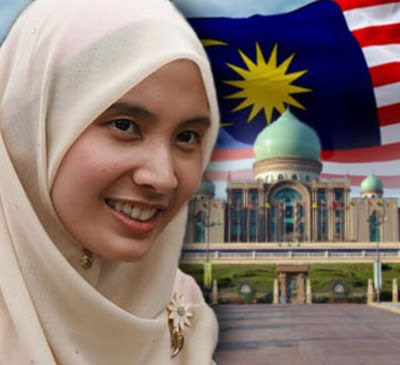 If our EC is fair and hones,BN will be dead and gone!

despite all that you see in bangkok the election in thailand is one hell of peace!!!!!