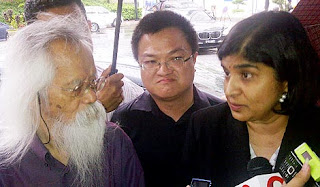 The police have placed a restriction order on 91 individuals, including organisers of the Bersih 2.0, Perkasa and Umno Youth's Patriot rallies.

The order is to stop any of the 91 from being present at several spots in Kuala Lumpur on July 9.

"This means that anyone (on the list) caught present at these areas will be arrested on sight," said the city deputy police chief Amar Singh.

Top on the list are the Bersih 2.0 steering committee members, including Ambiga Sreenevasan, Wong Chin Huat and Maria Chin Abdullah.

Fourteen from Perkasa, including its president Ibrahim Ali and other top leaders such as Ab Rahman Ab Bakar and Syed Hassan Syed Ali.