Is Putrajaya joking about Bersih.... 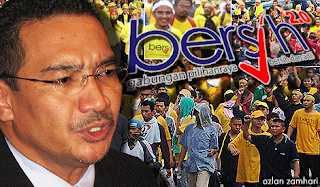 The circumstances surrounding the July 9 Bersih rally have been changing since the Yang di-Pertuan Agong Tuanku Mizan Zainal Abidin issued a rare edict and met both the prime minister and Bersih leaders.

Somethings haven’t changed. Bersih is still outlawed. Wearing their yellow T-shirt with the word Bersih will land you in the lock-up.

And now Datuk Seri Najib Razak is saying he didn’t promise to see Bersih over the rally and that it’s up to the police to decide whether the rally can proceed.

Is this a joke?

Can the government of the day stop stonewalling Bersih or waffling about where the electoral reform movement can have their rally? All this drama has made a mountain out of a molehill and makes the royal audience yesterday just a scene from a farce.

Last anyone checked, Najib is the prime minister and Malaysia is not a police state. That means he can order the police to issue a permit for a rally and tell the stadium authorities to host the event.

Take a large deposit. Impose conditions but don’t keep throwing up roadblocks to frustrate the rally. Enough has been done to snuff it out but it keeps getting bigger to the extent that it can actually realise Barisan Nasional’s nightmare of being booted out of Putrajaya in a free and fair election or actually, even in the next elections. 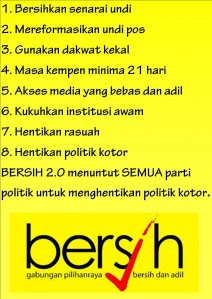 The government’s action today reveals that it might be having second thoughts or is getting cold feet about the Bersih rally. It also shows how insecure the Najib administration is over a coalition that just wants free and fair elections.

This insecurity and waffling have made them the butt of jokes and a source of anguish over the kind of leadership that exists in the country.

The King interceded and Bersih has acted in good faith to accept conditions put forward by Najib. It’s his turn to reciprocate and do the right thing.

Or confirm that this is a police state and let the citizens decide whether it should remain so in the next general elections.

The Najib administration can influence that decision by not treating Bersih as a joke. For the joke might be on the government later.