One ring, many questions.... 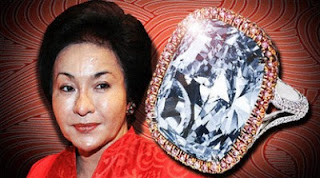 The story of the million-dollar diamond ring has finally made the leap from the Internet to the mainstream press. And Datin Seri Rosmah Mansor has denied it is hers.

This is the latest allegation against her since even before her husband became prime minister in April 2009. One has to wonder why she is a favourite target of unflattering gossip and innuendoes.

All said and done, the PM's wife's denial raises more questions rather than sending the rumour to oblivion

1) Why did Rosmah take so long to deny this allegation which has been floating around for nearly a month?

This is serious business. Who brings a ring costing RM24 million? Does the PM have that much to spend on a diamond ring? Or Rosmah herself? Can we have their public declaration of their wealth and businesses, if any?

2) Even if we buy this story about Jacob the jeweller using her name for money-laundering activities, why her? Isn't that too random? It's like the £3 billion golden yacht belonging to a Malaysian businessman. Random. And a hoax.

More importantly, does she know this jeweller with a less than a clean past? Do her associates or friends know Jacob?

3) Some of Umno blogs have not denied that the ring was in the country but that it was only RM24 million and not US$24 million. They also said the ring is no longer in the country and has been returned.

So, is the ring gone? Or still here. This is too important to sweep under the carpet.

4) Others say that the ring was a present to the first lady. Who gave her the ring in such a graceless way? And why? 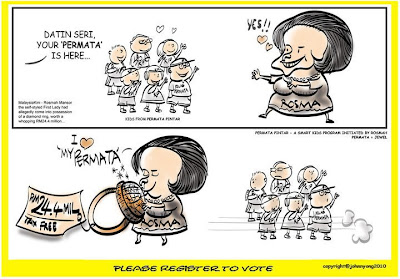 There are just too many questions and this will weigh heavily on Datuk Seri Najib Razak. Is this why his actions are a bit irrational, pissing off the Christians one day and the Wahhabi Muslims the next.

Mr Prime Minister, you have to explain this. Your political opponents will take you to the cleaners on this one, pun intended.

The Malaysian Insider, I hope you too get to the bottom of this story. Don't rely on spin doctors in the PMO or foreign consultants like FBC Media. Their job is to keep their job while serving factions within Putrajaya.

This one ring is more than the gossip or scandals over the past years. This can bring down a government faster than any street rally can ever hope to achieve.- Atan Shaharuddin.