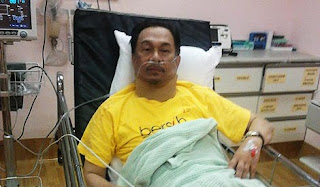 In KL Sentral, police had deliberately fired a tear gas canister directly at Anwar and he hurt himself trying to evade it. He hit his head on the road and also suffered a cut on his leg. His bodyguard who tried to help him suffered serious injury with a fractured cheekbone and a deep gash on his face.

“They shot directly at us. I could hardly breathe and stand up at the time,” AFP reported Anwar as saying. “I am okay. I still feel nausea and dizziness.”

Doctors have asked him to rest in hospital. Meanwhile, Inspector-General of Police Ismail Omar insisted Anwar was lying as his men only fired tear gas in the Pudu area. However, UMNO Youth chief Khairy Jamaluddin who led a 500-men counter-march in Bukit Bintang was also hit by tear gas.

Perhaps more ruthless was the way the police chopped down Mat Sabu. He was riding pillion, when a patrol car deliberated knocked into his motorbike in a bid to arrest him. The bike fell over and Sabu injured his right knee badly.

"It's not broken but he can't walk on it. He cannot stand without assistance. He needs to be in hospital, not stay in the lock up," PKR legal affairs director Latheefa Koya told Malaysia Chronicle.

Meanwhile, according to PKR vice president Fuziah Salleh, Mat Sabu, PAS vice president Mahfuz Omar and PKR sec-gen Saifuddin Nasution have just minutes ago been released by the police. Anwar has long the target of the Najib administraion as he is seen as the glue that binds all three Pakatan partners - PKR, PAS and DAP. He also has his special charisma and is able to mobilise huge grassroots support across the races.

Mat Sabu is also another very popular leader with the grassroots. His recent election to the No. 2 post in PAS had sparked huge concern in UMNO. Mat Sabu is known for his dislike of the corruption-tainted UMNO. 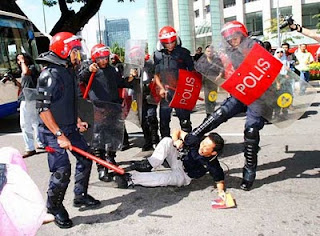 Under Sabu, PAS is expected to adopt a softer and more moderate stance, putting it in direct competition with UMNO for the Malay middle ground.

"Police brutality is at its peak. Right in front of me, they fired tear gas directly at YB Tian Chua and YB Khalid Samad who suffered serious head injuries. I managed to duck and avoided being directly hit," MP for Bukit Gantang Nizar Jamaluddin told Malaysia Chronicle.

"Tear gas also fired at us from the rear. Sirens were blaring at us from behind and at least 30 FRU waiting in front for us to reach closer before they shot at us. Very brutal, very cruel. So if the IGP says police only used tear gas in Pudu, then he is a liar out the worst sort."

Nizar was in KL Sentral along with Anwar and PAS president Hadi Awang. They were due to hold a press conference together with Bersih leader Ambiga Sreenevasan and national poet A Samad Said.

IGP Ismail Omar had told a press conference earlier this afternoon that Anwar was faking his injury as the police had not used tear gas at the KL Sentral but only on marchers in Pudu.