The lawyer for Fayyahd Afiq Albakqry, a member of opposition leader Anwar Ibrahim's security detail who was injured while protecting his principal, says they view the action of the police as “causing bodily harm” and “attempted murder”, as prescribed under criminal law.


The bodyguard's lawyer, N Surendran, who is also a PKR vice-president, said this when met by reporters in front of the Dang Wangi police district headquarters this afternoon after Fayyahd (left in photo) lodged a report over the police assault which resulted in his injuries.

“During the Hindraf rally, only one person threw a rock at police and yet 30 people were charged with attempted murder,” reminded Surendren, saying that a similar charge must now stick upon police personnel who fired tear gas canisters directly into the crowd. 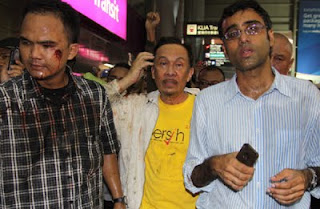 Fellow counsel R Sivarasa added that the police had committed three violations of accepted law enforcement conduct during the assault.

“One, they fired directly into the crowd as opposed to an arching trajectory as recommended; two, they aimed directly at the heads of Bersih 2.0 pariticipants; and three, they fired tear gas into an enclosed space,” he said.

Sivarasa contended that the culpability of the police was clear as Fayyahd's was not the only case of tear gas canisters being launched directly at the heads of rally participants.

“Shah Alam MP Khalid Samad was also hit on the head with a tear gas canister, as well as another person who was hit in the face. The police intentionally aimed at the head; three cases at one place cannot be coincidence,” recounted the Subang parliamentarian. 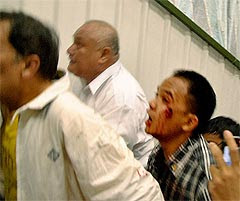 Fayyahd's cheek was severely injured during the brutal police assault on the KL Sentral underpass against participants of the July 9 Bersih 2.0 electoral reform rally.

The 25-year-old bodyguard's cheekbones were shattered and had to be braced with titanium in a reconstructive facial surgical operation recently.

Fayyahd is looking to file a civil suit against the police over the injuries he sustained.

“However the civil suit is separate from criminal proceedings that we expect the police to commence,” said Surendran.

The bodyguard has declined to address the press because of the injuries and the trauma he was still experiencing, his lawyers said.