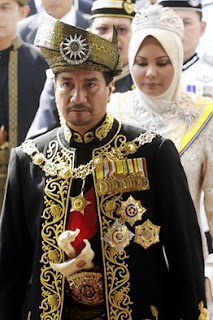 Malaysia's king made an unusual foray into the nation's volatile political field by urging pro-democracy activists and political leaders to settle their differences before a major protest rally planned for later this week. It was unclear whether the gesture would be enough to ease mounting tensions ahead of possible early elections.

The protesters Monday said they were reassessing whether to hold their July 9 march, organized to publicize demands for equal media coverage for all election candidates and for other electoral reforms, such as halting the past practice of people voting multiple times.

Police say they have arrested about 220 activists over the past week. They include six arrested twice—the second time Saturday—under an Emergency Ordinance that allows them to be held for 60 days without charge. All are under investigation for plotting to overthrow the government and monarchy—some for wearing Che Guevara T-shirts, which are widely sold in street markets across Malaysiaand are popular among young tourists.

The group came under official scrutiny for demanding reforms in anticipation of elections being called by Prime Minister Najib Razak. Fresh elections are required under Malaysian law by spring 2013, but many analysts expect the prime minister to call them much earlier.

Malaysia's constitutional monarch, Tuanku Mizan Zainal Abidin, on Sunday issued a rare statement asking both sides to step back from the brink of a broader conflict. Although his official powers are limited, the king—who carries the title yang di-pertuan agong in Malay, or His Royal Highness— is seen by some residents as the highest embodiment of Malay political supremacy, adding weight to his advice.

"The fact is, street demonstrations bring more harm than good," he said. "Instead, we should focus on our main objective to develop this country, and not create problems that will cause the country to lag behind."

Malaysia's predominantly Muslim Malay authorities call the proposed march an illegal act and argue that a multiethnic alliance of opposition parties is attempting to use it to bolster their momentumahead of the vote. Police officials have refused to provide permission for the demonstration to be held.

"Those who love rioting and chaos will take advantage of the situation. This is what we want to avoid," Prime Minister Najib said Monday, according to Malaysia's state-run news agency. He also said the government is willing to let protesters rally at a stadium instead of staging a march though the streets of Kuala Lumpur, Malaysia's main city.

A rival group known as Perkasa, which is pro-ethnic Malay, is planning a counter-demonstration on July 9, stirring fears of clashes.

On Saturday, the government outlawed the organization behind the initial demonstration—Bersih, or "clean"—which isn't officially registered. Bersih claims it is a coalition of existing registered organizations.