Can Najib be trusted... 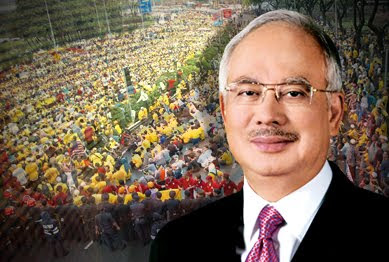 Events over the past week have brought to question whether Malaysians can trust the Barisan Nasional (BN) government? And if not, can Prime Minister Datuk Seri Najib Razak, who has made great strides to reclaim the coalition’s popularity, regain the people’s trust?

Let’s look at some of the events this week that has likely undermined not only his support but also his 1 Malaysia. People First. Performance Now.

Najib’s offer of a stadium for rally instead of electoral reforms movement Bersih marching through town pressing for free and fair elections. The Yang di-Pertuan Agong Tuanku Mizan Zainal Abidin had interceded and got Bersih to agree to the prime minister’s suggestion which was carried by the media, including the Umno-linked pro-government TV3 television station.

What has happened since then? The prime minister has passed the entire matter to the police, saying they have a final say whether the rally can be held in a stadium. Meanwhile, the Cabinet met yesterday and decided that Bersih cannot use any stadium in Kuala Lumpur because it is an outlawed organisation and might cause a nuisance. Add to that is the police applying and getting an order to restrict 91 individuals, including Bersih chairman Datuk Ambiga Sreenevasan, from entering Kuala Lumpur this Saturday.

Are any of these actions done in good faith? Can we trust the word of a government especially when it comes out of the mouth of the prime minister? Or has he been economical with the truth and never wanted to find a solution to Bersih’s demands.

And what about his endorsement of a silat group as the country’s third line of defence just days after the group threatened to go to war against those who rally on July 9? While Najib has every right to praise anyone he desires, it leaves much to be desired that he is endorsing a group that is prepared to go to war inside the country.

“I believe if there are evil enemies who want to attack the country from without and within, ‘anak-anak lincah’ will rise to fight them,” said Najib in a fiery speech last night.

Yes, the prime minister is right. We are all Malaysians but to endorse a group that is prepared to wage war against fellow citizens over philosophical differences is definitely not what Malaysians should expect from a national leader.

4. Najib mengucapkan terima kasih kepada baginda DYMM YDP Agong kerana membantu agar tidak berlaku gangguan kepada rakyat dan keselamatan negara.(Najib thanks His Majesty the Agong for helping to ensure that there is no disruption to public order and security of the nation)