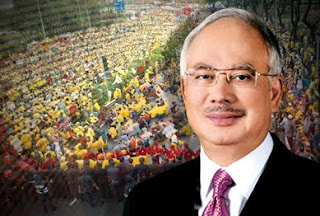 The business people complaining on TV3 about lost business would also not be doing good business on a normal day. What about those who made a roaring business because marchers were hungry and thirsty? Ask the 'mother of fish head curry' shop how much business they made that day? What about the vendor selling cold drinks on that hot day?

We will allow that president of the mamak eateries to state how much he can make in one day and then we will let the JHDN calculate whether he has been paying taxes on that daily revenue.

One day after the Bersih rally, the UMNO President came out with possibly his most forceful speech to date. He spoke with such intensity, vehemence and vigor and would surely succeed in inspiring the UMNO faithfuls. We have a fighting president after all. He seems almost believable.

He has thus redeemed himself- to be forceful and firm as demanded by Ibrahim Ali. Let's see how the UMNO president manages his new found vigorousness against the competing demands by anti Bersih online petitioners asking him to take stern action against Bersih organizers and the petitioners demanding his resignation. Will the intensity that aided him during his fiery speech helped him on?

Bersih has taken a life of its own and would have become what it became even if Ambiga wasn't around. Isn't it embarrassing for anyone to respond to Ambiga by asking her title be taken back and even her citizenship be revoked? Isn't this a sign of shallowness and an example of pitiable pettiness?

How would I understand his explosive speech? In order to properly place that speech in its context, we need to understand what Bersih has evolved into. Bersih started with its 8 demands on electoral reforms. That shouldn't scare UMNO in the first place. No problem with postal voting because violation on postal voting isn't as widespread as it was a long time ago. Unless of course the candidates' representatives during the voting and counting process were sleeping.

The big issues are always money politics and Gerry meandering, and phantom voters. Thousands of people in Sabah are being issued IDs with addresses in Kelantan! Now this is a problem.

Gerry-meandering is a real problem. It seems that UMNO can only ensure it has more reps in parliament by creating more parliamentary seats of maybe with 5,000 voters per constituent. Hence an UMNO MP represents 5,000 people, while his opposite number represents 30,000 people. The UMNO MP represents the same number if that number includes 10,000 police and 10,000 army voters.

Najib came out with his fiery speech upon pressing the panic button. Which silent majority is he talking? How would we categorize the more than 100,000 people asking him to resign? Maybe they are the silent subversives, anti-Malay, and anti-Islam and so on. Perhaps even traitors.

The Agong to whom everyone pledges allegiance and loyalty has ruled for conciliation. Yet the Home Minister countermanded that rule by unleashing security forces on peaceful marchers. Did the Police find any weapons among Bersih supporters that day?

I am sure, the video clip showing the man who eventually died while participating in the rally while still in handcuffs will be played over and over again in the next coming general elections.

Anwar Ibrahim? He was largely incidental in the Bersih rally because the Bersih rally actually and truly wasn't about him. If he participated in the rally because of some personal motives, who are we to fault him on that? At least he wasn't as stupid as ex ITM guy who went around telling people that Bersih is really about overthrowing a Malay government. 70% of the rally participants were Malays! 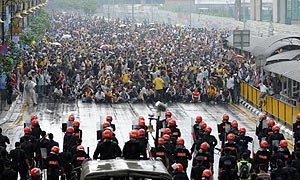 Now, the number who attended the promptly arranged special penerangan session by UMNO was 6000 as claimed the organizers. I am thinking this impromptu congregation was planned by the backroom boys and the PM's strategists; only they could come out with this magical number! Definitely it wasn't planned by the UMNO Information chief. We couldn't give too much credit to Ahmad Maslan the UMNO information chief.

The number is almost the same as the figure attributed to the Bersih marchers. How come the number of marchers seems to fill up whole streets and stadiums, yet the number are still 6000? The number of delegates to any UMNO General assembly at any one time is around 2500. That means, around 3500 were standing on the balcony in the hall. It's a miracle with that big an attendance; the building didn't collapse under the collective weight.

Even if 6000 attended, that's still not a number than can win votes. That represents a miniscule proportion of Malay voters.

Therefore I am not easily impressed when the UMNO president said, if we want, we can have 3 million marchers. Unless they are bussed into the city, given a t shirt maybe two for the missus back home, a packet of lamb or chicken mandi, RM 50 pocket money and a night's stay at Chow Kit.- Mohd.Ariff Sabri bin Hj. Abdul Aziz.

This is an excerpt from Sakmongkol AK47 blogpot. Continue reading here.