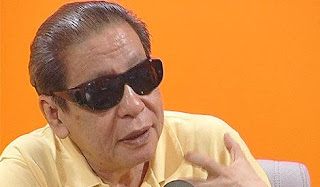 There are very few who can claim to be an equal to Lim Kit Siang, who has spent nearly as many years as Malaysia has existed in relentlessly pursuing his beliefs as opposition leader. Having experienced first-hand practically every pivotal moment that shaped the country into what it is today, the 45-year political veteran can be excused if he maintains a critical view of even the most promising developments.

Lim became (right) DAP's secretary-general in 1969, at a time when racial tensions blew up into the bloody rioting of May 13, was detained for more than a year on two separate occasions under the ISA - first in 1969 and again under the controversial Ops Lalang in 1987 - and even convicted for leaking official secrets related to dodgy arms deals with a Swiss company.

He also suffered his first and only electoral defeat in 1999, resulting in his quitting his powerful and long-held post of party secretary-general. But as he goes through his 70th year of life, Lim feels the opposition has finally reached a point where change is no longer a pipe dream.

"... I will say that for the first time, taking federal power is something not completely impossible, it is achievable," he said in an exclusive interview with Malaysiakini, wearing a pair of dark glasses following an eye surgery.

In characteristic fashion, Lim kept a lid on his enthusiasm going into the 13th general elections, but couldn't help but admit that chances look brighter with each passing day. He highlighted the recent Bersih 2.0 rally as a strong indicator of Malaysians' desire for change, coupled with the numerous gaffes committed by Prime Minister Najib Abdul Razak and his administration.

"It would appear we have a PM and incumbent government that is unable to see and empathise with the changes that the people want... (the public is) more and more alienated, (and the government is) taking actions and steps making them more and more cut off from the ground.

Lim, who was with other Pakatan and Bersih 2.0 leaders at KL Sentral when police carried out one of several clampdowns on protesters on July 9, said he was "surprised" to see the large public turnout in support of the banned movement, despite what he called "threats and intimidation" issued by the authorities in the weeks preceding the rally. Recounting his personal experience at the rally, Lim said it was "utter chaos" when police fired tear gas from opposite ends of the bus tunnel at protesters, who were sandwiched between two blockades.

"... it appeared without any warning, no notice. Tear gas was fired and into an enclosed space, which I think is most criminal, wreckless and dangerous, heedless of the harm they could do. And of course that was my worst tear gas attack.

"(I) tried to run away from (the) front, then found at the back tear gas (was) also fired in both directions, and then arrests were taking place, people gasping for breath... I also fell down, so in that confusion, there was utter chaos at that time," said Lim, who eventually managed to escape with several party colleagues into Brickfields.

The alleged police brutality aside, Lim stressed that the greater significance of the Bersih 2.0 rally was that it presented a clearer representation of the true unity among the various races in Malaysia.

"Maybe the (general election) strategy will be to write off the Chinese voters, and hope on bringing back Malay and Indian votes and that is the formula... that is in a way underestimating Malaysians' yearning for change.

"... I think that as (the) Bersih rally has shown, it is an opportunity for Malaysians regardless of race, religions, class, region, gender and age (to) come (sic) together, and when they sang Negaraku, it was the first time with real meaning, everybody (was) proud, and very moved.

"It's different from when (the) PM and cabinet ministers go around and distribute (the) national flag for instance; it would evoke no feeling whatsoever. This is something which (shows), maybe we should not underestimate Malaysians," he said. 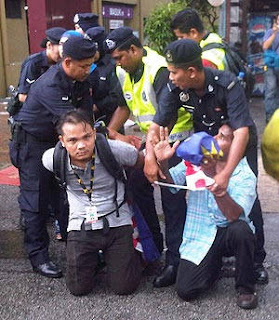 Lim, who is also Ipoh Timur MP, said the Bersih 2.0 rally is doubly important in that it has effectively proven that the pro-government spin perpetuated by Umno-owned Malay daily Utusan Malaysia no longer holds sway among the public.

He admitted that in the past, whatever negative press published by Utusan against the opposition would have had damaging and far-reaching consequences, especially when it touched on sensitive issues such as the recent alleged Christian state issue, racial rights and the May 13 racial riots.

"Of course we are (still) very upset and unhappy (with such reports now), but we felt that the times have changed, (and) people are not going to buy it, even among Malays as a whole.

"I think what Bersih 2.0 has created, (is) to show that all these poisons of Utusan have failed. The Malays, Chinese, and Indians (have) come together as Malaysians. It (poisons) just could not work.

"... before 709, all the terrible (sic) talk about racial and religious things, you sometimes wonder (if) it had (an) effect or not, but 709 wash(ed) them away. I think Utusan's campaign is not as powerful as they think," he said.

Returning to the impending general elections, Lim declared in no uncertain terms that the fight for the country's future lies in its two largest states - Sabah and Sarawak. He acknowledged that the two states, with a total of 52 parliamentary seats on offer, are "fixed deposits" for the BN ruling coalition, but this only makes them more crucial in determining whether or not Putrajaya remains standing.

Pushing the 'Save Sabah, Sarawak to Save Malaysia' slogan, Lim insisted that changing the government at state level means little without federal support, particularly in Sabah which has a history of being an opposition hotbed. "You cannot save yourself. The (illegal) immigrant (issue) for you remains, (and) you will need federal intervention. So if the people of Sabah want to save Sabah, they will need to save Malaysia. Change Malaysia in order to change Sabah.

"So for the first time in Sabah, it's a question not only about Sabah politics... (for) Sabahans standing up to shape your own destiny, they must be able to also shape Malaysians' destiny," he said. In the peninsula, Lim set his sights on Johor as the place where change would carry the most impact on the country's future, coupled with Sabah and Sarawak.

He admitted that Johor is a "most difficult state" to penetrate, but in the same breath called it a "frontline state" - the same description DAP tagged on Penang before it fell to Pakatan hands after the 12th general elections in 2008.

"It (Johor) has been regarded as a fortress not only for Umno but also MCA. And (looking at) the history of Johor, Umno has always been very strong and considered as untouchable, in fact. "But I think the 308 (March 2008 general elections) events have shown that Johor is not that invincible, and I think you can feel the type of change taking place also in Johor.

How far (change will happen) is the question," he said, adding that a shift in one-third of the seats towards the opposition is enough to signal a "major change" in the national political landscape. But while fellow opposition leader, PKR de-facto chief Anwar Ibrahim, came out declaring that the next general elections will be a sure win for Pakatan thanks to Bersih 2.0, Lim was far more cautious.

"I would say 709 gives a greater hope that Putrajaya is within reach. But I wouldn't make the definitive statement that we are there," he said with a laugh.