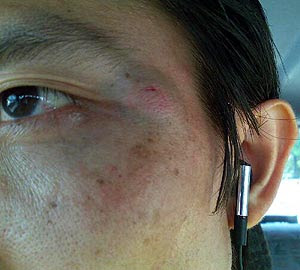 A new witness came forward today with pictures of injuries to his face he said were caused by a tear gas canister that grazed him - another example that PKR claims to be police intent to cause bodily harm at the KL Sentral underpass during the July 9 Bersih 2.0 rally.

The victim, PKR Klang division chief Yew Boon Lye (right), told reporters at the party headquarters in Petaling Jaya that he was grazed by a tear gas canister, causing him to suffer bruises to his left eye.

"I immediately sought treatment at a clinic after returning to Klang. The swelling took a week to go down," Yew said.

"(PKR supremo) Anwar Ibrahim's bodyguard had his cheek bones crushed, Shah Alam MP Khalid Samad needed six stitches on his head, but Yew was lucky his injuries were not as severe.

"The fact that three people took hits on their heads is not a coincidence, these tear gas rifles were directly aimed at the people's heads," Sivarasa said.

The party also aired several video recordings to journalists in response to clippings released by the police, one of which shows PKR's Batu MP Tian Chua allegedly charging at the police.

In a Free Malaysia Today video which was shown, viewers could hear someone in the police line saying, “Bawah! bawah!” (down! down!) as the police were aiming their tear gas launchers, after which one of the officer is seen lowering his launcher.

This, PKR said, is further evidence that the police had deliberately aimed the canisters at protestors even though they are meant to be shot at an angle.

'Police did not fire because of Tian Chua'

The party also used the same video to counter police claims that the authorities were forced to fire tear gas on protesters because a group of them, led by Chua had charged at the police. In the same video, it was seen that a commanding officer whom the party claimed to be Brickfields police chief Wan Abdul Bakri Wan Abdul Khalid, ordered journalists to move out of the Federal Reserve Unit's (FRU) line of fire.

"Twenty four seconds before they fired (the tear gas) they had already told reporters to move, this clearly showed they intended to hit.

"For the police to say that they fired (tear gas) because a small group (including Chua) had rushed out is unfounded," said Surendran. 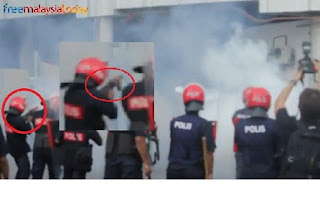 He also claimed that before Chua tried to rush out, he had tried to negotiate with police, to no avail.

"When we reached the front, Chua started walking to the police line, and so did I. Just before he could get close, we heard violent shouting and they were aiming at us.

PKR also aired a TV Selangor video showing Chua running towards the side of police line which they claimed is proof that there was no intention to charge the police.

"Chua had already ran out and going to the side, he didn't go any where near the FRU,” pressed Surendran.

In the same video, police were also seen repeatedly beating a protester with a baton while two other officers restrained him.

“The man was already restrained by the police but the other police officer was beating him continuosly with a baton,” said Fadia, who was in charge of the videos.

Surendran again called on the police to classify its actions during the July 9 rally at the KL Sentral underpass as attempted murder and open an investigation into the matter instead of investigating the protesters.

“Under section 300 of the Penal Code which defines murder, when you fire a loaded cannon even without premeditated intention to kill someone but someone dies, it is murder. It this case no one died, so this is attempted murder,” he said.

Last Wednesday, Surendran was questioned by police after he had made similar statements that the police action on that day amounted to attempted murder.