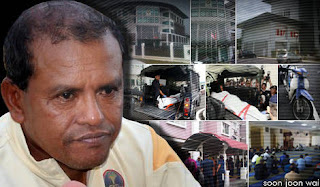 Disappointed with the police investigation, Maziah Manap, wife of the late Ahmad Sarbaini Mohamed, found dead at the Malaysian Anti-Corruption Comission (MACC) building in Kuala Lumpur, calls on the government to form a royal commission of inquiry (RCI) to probe her husband's mysterious death.

"The inquest is not looking seriously into possible foul play. I want an RCI. This is the first time, I'm calling for an RCI," she said after lodging a police report at Kelana Jaya police station this morning.

Maziah wanted the police to re-investigate the case after blogger Raja Petra Kamaruddin named in his website an MACC officer ordering Sarbaini to stand on a window ledge as 'punishment' for trying to retract his confession in a graft case. She said that what transpired during the current inquest was to a certain extent in line with Raja Petra's allegation.

Raja Petra claimed that in obeying that order, Sarbaini's belt got stuck on the outer part of the window, resulting in loss of balance, sending him plunging to his death two floors below.

Selangor Customs assistant director Sarbaini was found dead on April 6 at an open air badminton court on the first floor of the KL MACC building in Cheras. Maziah, accompanied by her brother-in-law, children and cousin, was upset that the inquest did not include the foul play angle in its investigtion.

"All the witnesses said he jumped (from the pantry on the third floor), but what made him do so? There must be a reason!'," she said.

In her police report, Maziah insisted that her husband did not commit suicide and suspects criminal element in the death. She said the family can accept the inquest's decision if it rules the death as an accident, but as a result of foul play.

Justice has not been done for Sarbaini... police did not investigate seriously, they were not serious.

The police had identified the case as sudden death. Bukit Aman crime scene investigator Sharul Othman had testified during the inquest that there was no element of suicide or homicide in the death. He said Sarbaini had tried to leave the MACC building through a window on the third floor pantry, and accidentally fell to his death.

In the police report, Maziah demanded that police commence fresh investigation over the "it wasn't me, it was my men" remark of MACC officer Abdul Ghani Ali which, she claimed, indicated that the anti-graft body's officers were involved in her husband's death.

However, Abdul Ghani had clarified during the inquest that he had meant that Sarbaini had met with his officers and not him on April 6.