MACC trio should be charged with intimidation or murder... 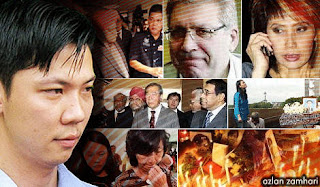 The three Malaysian Anti-Corruption Commission (MACC) officers allegedly implicated in the death of political aide Teoh Beng Hock should at the very least be charged with criminal intimidation.

This is the stand adopted by PKR vice-president N Surendran, who said this yesterday in a statement, pointed out that the royal commission of inquiry had built its case against the three so the Attorney-General's Chambers should take legal action against them.

"The report highlights the ineptness of the MACC in conducting their own internal investigation.

"This shows there was no real attempt by the MACC to investigate their own people. Were they protecting these three people and not subjecting them to disciplinary action?

"In fact, I am appalled that one of them, the former Selangor MACC deputy director, had been promoted as Negri Sembilan chief.

"Is the MACC trying to nominate someone who is known to employ such questionable tactics for promotion? Is this recognition for such methods? These people should at the very least be charged with criminal intimidation," said Surendran,a lawyer by profession.

Under section 506 of the Penal Code for criminal intimidation, an accused person can face a term of imprisonment of seven years or fine or both, upon conviction.

The RCI report on Teoh's death was released on Thursday with the five-member panel had proposed action be taken against the three officers, namely former Selangor investigations unit head Hishamuddin Hashim, investigation officer Mohd Anuar Ismail and assistant superintendent Mohd Ashraf Mohd Yunus, who had been found to have employed aggressive and inappropriate interrogation methods.

Hishamudin who was the Selangor MACC deputy chief, is currently the Negri Sembilan MACC commissioner, and was alleged to be greatly involved in the operation, which he had denied.

Yesterday, from the 124-page report Malaysiakini had highlighted that the commissioners had found Hishamuddin to be leading the operation, describing him him as "arrogant, given to falsehoods, untruthful and uncompromising in his stand".

"However, he had been promoted after the incident and currently holds a senior position as Negri Sembilan MACC director," read the report.

DAP stalwart and Ipoh Timur MP Lim Kit Siang said that if the MACC has accepted the RCI's findings and recommendations, those who have conspired to cover up the truth and commit perjury at the RCI must be suspended immediately.

"Should they be charged in court with various crimes including Teoh's murder?

"Is the MACC or the government prepared to publicly accept responsibility for causing Teoh's death and make a generous ex-gratia compensation payment to the family, to minimise the family's sufferings and to facilitate a closure of the tragedy?," he asked.

Lim said the MACC was the second attempt by Malaysia to establish the country's own version of Hong Kong's Independent Commission Against Corruption (ICAC), with increased powers, staffing and budgetting.

"However, in just two years, MACC had achieved what its predecessor the Anti-Corruption Agency (ACA) had never done in 41 years from 1967-2008 - two suspected deaths at its premises under questionable circumstances - Teoh's death in July 2009 and that of Ahmad Sarbaini Mohamad in April."

He noted while the commission found the MACC liable for Teoh's death, its report did not give a direct answer to the question.

MACC trio should be charged with intimidation or murder