Sodomy II - When Dr.Razali refuses to refer to notes.....

Normally, witnesses who cannot remember details of a particular incident are allowed by the court to refer to the notes they made on that case. However, a oddity appeared in Anwar Ibrahim's sodomy trial when the HKL doctor persistently refused to take a look at the notes made by him or the other two doctors who had examined Saiful.

Dr Razali (left) was badgered with several questions by senior lawyer Karpal Singh, who sought to entice him to refer to the clinical notes. The questions ranged from Saiful's bowel habits, the earlier examination done at Pusrawi Hospital, and also how many chemist reports were there. Despite some uncertain answers, and being urged by Karpal many times, Dr Razali refused to look at the clinical notes to help jog his memory.

Karpal had resorted this after High Court judge Mohamad Zabidin Mohd Diah had earlier rejected the defence's application to obtain the clinical notes, but allowed its application to have a copy of the preliminary examination report, which was dated July 10, 2008. Karpal had applied for two documents, namely a copy of the preliminary report - which he made on Monday - and the clinical notes which he applied for this afternoon.

Justice Zabidin in his ruling said the court would not allow access to the clinical notes unless the witness is agreeable to look at them, but allowed the defence access to the preliminary report in "the interests of justice". This had prompted Karpal to ask pointed questions in an attempt to glean information from the clinical notes, but on all occasions during the 30-minute questioning, Dr Razali repeatedly refused to refer to the report.

“We cannot force you to look but may persuade gently,” he said at times to Dr Razali. On more than one occasion, solicitor-general II Mohd Yusof Zainal Abiden had objected to Karpal's line of questioning.

Karpal pointed out that the full medical report which was dated July 13, 2008, only has a two-line medical history and there certainly was much more as to Saiful's medical history, during the three-hour examination. All three doctors - Dr Razali, clinical pathologist Dr Siew Sheue Feng and Dr Khairul Nizam Hassan - said they had examined Saiful for three hours beginning 9pm and ending slightly after midnight on July 29. Asked by Karpal whether he knew that Saiful was inspected earlier at the Pusrawi Hospital, Dr Razali said he knew there was an examination but did not know who or how many physicians had attended to the complainant.

Karpal: You cannnot recall the details? Surely there must be more in medical (clinical) notes than the two liner in the final examination report. Do you want to refer to your notes?

Karpal: To remember the details you need to refer to your notes

Yusof: (Rising to object) You must ask what are the details that you refer to?

Karpal: I am asking the details over what happened at Pusrawi Hospital. Do you need to look at your medical notes?

Witness: Can you give me a few seconds to remember (laughter in court).

Karpal: Come on, don't you want to see your notes?

At this point, Karpal applied for an adjournment to tomorrow because as he put it, he “does not want to continue badgering this witness.” Dr Razali replied, “Yes, there is a lot of pressure from you!”

Following this, Justice Zabidin allow the case to be adjourned to tomorrow morning.

Although the July 10 medical report was handed to the defence, there were some questions pertaining to the report as originally they obtained an unsigned copy which was obtained from Dr Siew. However, as the court allowed the preliminary report to be given, the defence were given a copy signed by all three doctors, but Dr Razali agreed that it was not dated as the July 10 referred to was not written on the final page but on the second page. 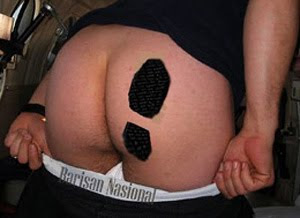 The judge can order the witness to refer to the notes, so as to ensure that his testimony and his contemporaneous notes are consistent.

However,the judge,apart from refusing the admissability of the notes also refuse to force the witness to refer to the notes since the witness insist that he cannot remember while the notes are in front of him.

While Karpal fails to get a copy of the clinical notes, he can indirectly get information from it, if the witness asked for it as reference when answering questions in court. However, Dr Razali refuses to refer to the clinical notes.