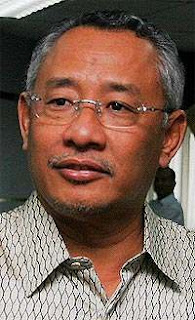 The involvement of a former Selangor exco member in the business dealings of at least one of the suspects in the Banting murders has raised questions of how much political backing the lawyers implicated in the case enjoyed before their arrest last month.

According to Companies Commission of Malaysia (CCM) documents obtained by Malaysiakini, former Selangor exco member and Sementa state assemblyperson Abdul Rahman Palil (right) was a director in Ample Quality Sdn Bhd along with one of the suspects in the murder of cosmetics millionaire Sosilawati Lawiya and three others. One Mohd Firdaus Palil is also cited as one of Ample Quality's directors.

Sosilawati, 47, her driver, a bank executive and her personal lawyer were reported missing since Aug 30, after going to Banting for a land deal. On Sept 13, Bukit Aman CID director Mohd Bakri Zinin confirmed that the four victims were beaten to death before their bodies were burnt and the ashes scattered into a river near Ladang Gadong, Tanjung Sepat, Selangor.

Ample Quality, curiously enough, figured prominently in a case of alleged land fraud reported in May last year in Penang that also involved Sosilawati herself. According to a police report lodged on May 21, 2009, one Ramanathan Nachiappan said he had entered into a sales and purchase (S&P) agreement with two others - Palamalai Chidambaram and Nallaperumal Chidambaram - involving three lots of land in Batu Feringghi, Penang, worth about RM30million. Ramanathan also said in the report that he had lodged a caveat on the said properties.

Several days earlier, however, Ramanathan said he was informed by lawyers representing a KL-based company called Southern Symphony Sdn Bhd that the latter had already entered into an S&P agreement to sell the land in question to Ample Quality for RM29 million. Sosilawati, according to other CCM documents, was then one of the directors of Southern Symphony, a RM2 set-up.

“I believe that someone has fraudulently represented themselves as the registered owners' power of attorneys to sell and to transfer the above properties without the knowledge and consent of their rightful registered owners,” Ramanathan added.

Abdul Rahman declined to confirm or deny the claims when contacted about the matter. Asked whether he was a director of Ample Quality, the ex-Selangor exco member said he has “nothing to do with it.”

He also did not budge when asked if the police had called him up for investigations.

“This is a police matter. Let them investigate. I have no comments,” he told Malaysiakini, before disconnecting the call.