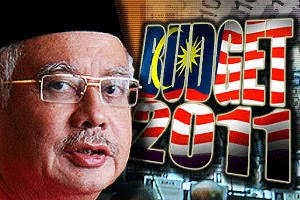 Prime Minister Najib Abdul Razak's budget speech drew loud jeers and shouts of his wife Rosmah Mansor's name from the opposition. It began when Najib announced plans to turn Malaysia into a shopping haven with a proposal to exempt some 300 items from import duties.

“Such goods are apparel, handbags, shoes, shampoo, suits...” said Najib, triggering a crescendo of murmuring from the floor.

When Najib announced that “hair dye” was on the list, the government and opposition benches could not hold back any longer and burst into laughter. This was also punctuated with chants of “Rosmah” from several members of the opposition bench. Najib etched a grin following the din and slowed down the pace of his speech while he read out, “... undergarments, lingerie, nightwear, perfumes and mosquito netting.”

His deliberate attempt to provoke his peers drew even more laughter. Louder jeers were saved for later, when Najib announced a RM111 million allocation for the Permata programme, which is Rosmah's brainchild. Mahfuz Omar (PAS-Pokok Sena) was heard loudly shouting “Rosmah! Rosmah!”, to which Najib responded with yet another smile.

The budget speech has also resulted in high mentions on the premier's wife on micro-blogging site Twitter.

Twitter has been abuzz with brickbats and bouquets on the heels of Prime Minister Najib Razak's 2011 budget speech. Here is a survey of what Malaysians are tweeting, edited for clarity.

Special gift for special someone

Nasrudin Hassan (PAS Youth): The rakyat is fortunate to be able to wear imported underwear without having to pay tax. Who is going to buy undies in bulk after this? I think I know.

yahyashukor: Underwear plays an important part in achieving the objectives of the Economic Transformation Programme and the seven percent economic growth rate.

Tian Chua (Batu MP): Najib kept a secret gift for the first lady - RM111 million for Permata! What a surprise for Rosmah. Thank you, hubby! So sweet!

Mikichoo: I think the opposition are being a little bit naughty here. Everyone knows Rosmah prefers to do her shopping overseas!

georgettetan: Do we need another huge erection?

Fahmi Fadzil (Fairly Current Show): What would a 100-storey tower really do for the country? Oh wait, contracts.

pratamad: I suspect Najib is like Dr Mahathir - both want a retirement office on top of a skyscrapper. Dr Mahathir has got (Petronas) TwinTowers, Najib wants Warisan Merdeka.

Bumilangit: Guess how many low-cost homes can be built with that money?

strung_out80: Taking (the saying) 'the sky's the limit' a bit too seriously.

Bumilangit: I hope it won't be designed by Rosmah. But why do I think that I would be wrong?

Payrise for the lucky few

Edmund Bon (Bar Council): The crux is in increased allowance for Tok Batin. Who gives it? Where is the accountability? Is it a way to control the Orang Asli?

Amir Muhamad (Filmmaker): Imams and postmen earning RM700? It doesn't pay to seek the right path, or deliver messages in this country.

What about our future?

CKGord: Looks like EPF funds will be used for development. Hey, that one is not 'tax' money but 'our future' money!

Z4r4z4in: No increase of toll rates for the next five years for PLUS highways - there goes our EPF dividends.

IamMalaysian: RM146 mil to support oil, gas and energy and a "commitment" for green technology. Sweet.

Erna Mahyuni (Writer): No mention of alcohol tax! Let's drink to that!

Some pats on the back:

Dzulkefly Ahmad (Kuala Selangor MP): RM500 million for re-tooling and upscaling skills. That's good, PM! Make sure there are no leakages for cronies.

rubus_pheonic: The 3-months maternity leave sounds great. Are all you Astro subscribers ready for the six percent service tax?

RashidYusoff11: I waited over an hour. What's the deal with my income tax?

IreneJY: I thought they said if we don't cut down the spending we'd go bankrupt? Why the budget increase this year?

And the conclusion is …

Shahredzuan: It's an election budget!